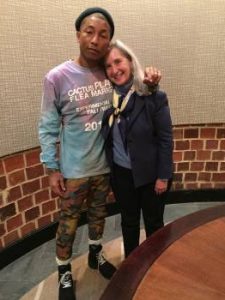 “Hidden Figures,” the true story of African-American women mathematicians at NASA during the 1960’s is one of the most uplifting films of the year. Its score is composed by by Hollywood legend Hans Zimmer with Benjamin Wallfisch and the best pop producer in the business and one of the most popular performers as well, Pharrell Williams, who told me “I’m lucky to be a part of this film.” Even before he got involved, Williams had begun to experiment with some 60’s-inspired compositions.

“I grew up around that kind of music because I was born 11 years later. So I used to hear it around the house, my parents played it and at my grandmother’s house too, I used to hear the music. That’s a very crazy time, but it felt good and it was all music that evoked, music that came from the soul and that’s why they call it soul music. It was like you could just feel the core of where someone was coming from.” He used a mix of old and new instruments to create the sound. Williams has worked with a wide range of musicians and performers. “Collaborating allows me to channel and learn new ways of working, new ways of thinking, new directions.

This is all an education. Life is an education, so every time I collaborate with somebody it’s like a crash course into the way that they work, into this new moment that we are sharing and into uncharted territories.” He told me what he learned from Zimmer and Wallfisch about writing music to complement a story. “Hans always likes to find the poetry in a script and then he likes to parallel it with the score. And Ben is like a seeker of tenderness. I like to stoke the fires and try and stimulate something.

So it was like this really interesting trio in the way that we worked. It was a whole lot of fun. And ultimately we came to the conclusion that when you think about scores there’s always like the default go to, Euro/Anglo angle when composing a score so we thought well, these women were not Euro and they were not Anglo. They were African-American, they were women and it was the 1960s, so those were our coordinates. That’s what we locked in on and that’s what we tried to chase.” He said this might be the music they listened to as they were cooking and driving to work.

“This music was meant to be the backdrop to the most important dialogue and the most important stories in its universe, in its world and so the music was never supposed to shine brighter than what was going on in the film because that was the most important part.” He said that does not mean creating the melodies differently but “you’ll know when it’s doing too much. I tried to pull the fire out of something first. Like in other words if you ask me do that then I have to go to that dial I have to dive deep on the four dimensional level and try to well up as much fire as I can and then I dial it down once I’ve got it.”