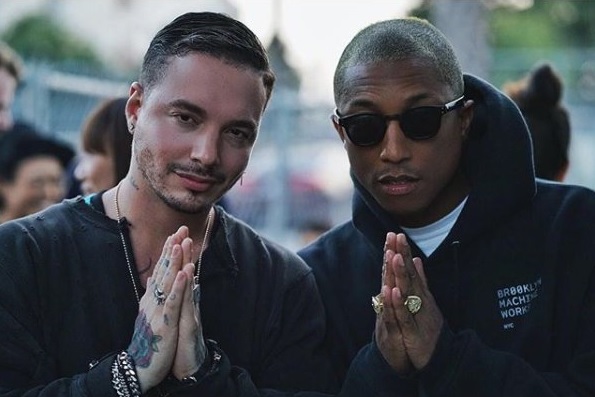 Colombian-born artist J Balvin is arguably one of the biggest artists in the reggaeton genre these days. While his music has earned him Latin Grammys and a loyal fan base, it’s also allowed him to expand his brand. The singer was given the title of the ambassador of Men’s New York Fashion Week this year, a first for a Latin artist.

The 31-year-old’s music and style is not only captivating those in Latin America, but it’s breaking barriers and gaining the recognition of listeners and fashionistas worldwide. XXL caught up with the megastar in New York City last week to talk about a number of subjects including his friendship with Pharrell, his love for hip-hop, future collabs and his fashion sense.

Where do you find your inspiration when it comes to your everyday style?
I like to look at a lot of fashion blogs to stay up to date with the trends, but definitely Pharrell Williams is someone that I’m influenced by when it comes to fashion. I don’t dress exactly like him, but I want to be like him in the cultural way. He opens the doors for a lot of new fashion designers and creates his own style. It’s all about love with him and he’s the culture.

Speaking on Pharrell, you actually recorded a song with him last year called “Safari.” How was that experience for you?
It was amazing. I didn’t know he was that special. Like I knew he was a great producer and a great artist, but as a person he’s really humble and real. That’s what I loved about him when we worked together. I love the way he is and he’s taught me a lot of things. Last time I went to Paris with him to the Chanel show with Karl Lagerfeld and I told him, “I want to learn from you! Don’t give me nothing. Give me the info,” you know? I just want to learn from him and what’s good is that he’s open to share with me all the knowledge that he has.

How long did you guys spend at the studio recording the song?
It was amazing! We recorded for like seven days — morning to night, and it was just amazing, man. A dream for me and an experience I’ll never forget. We have lot more new songs coming out too. “Safari” wasn’t just the first one. I really love Pharrell. I love what he does with the I Am Other crew and his label. Like the stuff he’s doing with BIA is gonna be really good!

So what’s the best advice you’ve gotten from Pharrell?
Be you! I remember on my way to Paris to the Chanel show I was like, “Yo, I don’t know how to behave. Like what am I supposed to do with all these top of the top people?” And he was like, “Bro, just be you. That’s the reason why you’re working with me and that’s the reason why I’m taking you there. It’s because you are you.” And that’s what I did and it was amazing out there. The other advice he taught me was, one day I called him, “Yo, master!” and he was like, “I’m not a master. I was, I am and I’ll forever be a student,” and that right there stuck to me.