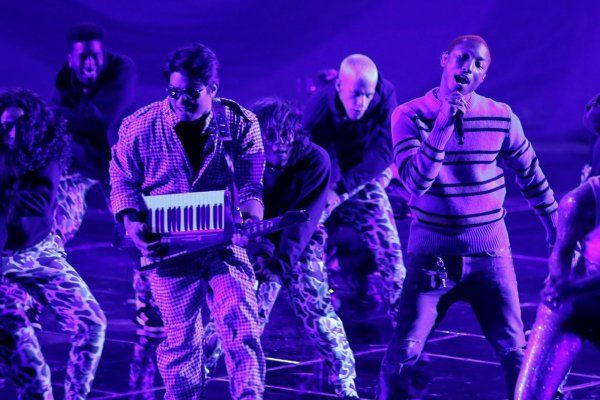 Go-to sound engineer Mike Larson tells the stories behind “Lemon,” “Don’t Don’t Do It,” and the group’s return album. Since their 2001 debut, N.E.R.D. has changed the way artists and listeners see genre, breaking down the walls of rap, electronic, and rock to create albums that felt both futuristic and of the moment. No_One Ever Really Dies, the group’s fifth album, is a composite of pulsing ‘80s punk and booming 808s, surrounding a guest list of stars including Rihanna, Kendrick Lamar, André 3000, and more.

The album speaks to America’s current divisions — Trump spouting hate in office and police killing unarmed black citizens in the streets — and its sound pierces and grates, much like the experience of spending time online in 2017. Sound engineer Mike Larson first started working with Pharrell in 2007 at South Beach Studios in Miami, where N.E.R.D. was recording Seeing Sounds. Since then, he’s worked on Pharrell’s solo albums and engineered his production for Rick Ross, T.I., Wiz Khalifa, and more. For Larson, working with N.E.R.D. fulfilled a lifelong dream.

“In Search Of… changed my life — straight up,” Larson explained to The FADER over the phone. “Hearing that and also loving hip-hop and knowing that these two things can coexist was amazing. I was felt like, When I grow up and get a job, this is where I need to fit in. This is what I need to be doing.” On No_One Ever Really Dies, Larson worked closely with Pharrell, Chad, and Shae to craft the sound of their new album. In a recent interview with The FADER, he explained the elaborate recording process, the infinite versions, and political vision that went into its creation.

MIKE LARSON: The first session we did was in January of 2016. Pharrell mentioned, basically, “I think I want to start a new N.E.R.D. project,” and I had been going through a bunch of his beats and had stumbled across a few unused N.E.R.D. beats, so I was like, “Oh we got some stuff we can even use as a starting point.” Pharrell makes beats a lot of times with projects in mind but it sits around. As you can imagine, he’s got thousands of beats in progress, ideas, and all kinds of stuff. It’s fun to go through those sometimes, you never know, you might find a gem just waiting to be put out.

Throughout the whole project, Pharrell, Chad Hugo, and Shae Hayley were together giving their visions on the different ideas that had been demoed. I think, all in all, there were around 15 to 20 songs that were going towards this project and from there we narrowed it down. The guys will select the ideas they feel are strongest and go in, chisel away at them little by little, refine and try different things, adding sounds, taking stuff out, or completely flipping it. On songs like “Lemon” and “1000,” there’s points in the song where the beat completely changes. That was one of the really fun things about this project — we went into it not having rules. The only rule was to ignore all rules. Traditional song structures are out the window. Like on “Voila” — the end of what you think is the end of the song is a totally different beat comes in and Wale comes in on what you can call the outro of the song.

The theme with N.E.R.D. has always been to create what’s missing in the music scene. That’s the only parameter: speaking on topics that are socially relevant at the time and making it musically sound like something that’s not present. I feel like a lot of the songs on the new album, there’s a concept that existed first, and something Pharrell wanted to talk about, or an idea and then the music followed suit. The songs usually start with Pharrell putting a beat down or building the track up from a skeleton frame to a full situation. A lot of the time he won’t say anything, he won’t explain himself at all at the onset. I remember when we were doing the track “Don’t Don’t Do It” with Kendrick Lamar. He went in and did the vocals and did the verse and stuff, and I don’t think anyone realized at the time what the lyrical content meant necessarily. It was a total juxtaposition because you have this bouncy, almost dancey vibe but the lyrical content is going in the other direction. It kind of tricks people.

We talked about sampling the video of Keith Lamont Scott’s death but it didn’t end up happening. In another song, “Rollinem 7s,” Pharrell sampled Rachel Jeantel, the girl that was involved with the Trayvon Martin shooting. They actually had her in court on the stand testifying against Zimmerman. I think she got on CNN and we chopped up her voice and it appears on that song. There’s a lot of cool little samples and soundbites, like Retchy P and the “mad ethnic” clip. Some of the little chops are so small that you can’t even tell what they’re saying sometimes. There’s a dude by the name of Mr. Turner, which was like a viral early Youtube video. It’s a DUI stop and the cop is like giving this dude the third degree and he’s just going off on the cop. I think the cop voice was sampled in “Voila,” the song with Gucci Mane.

Usually once those songs got to the strong demo stage is when Chad would come in and do his thing and add instruments and in some cases make arrangement changes that strengthen the records. Shae will do his vocal parts throughout the process. Chad comes in and basically tries a bunch of shit on the song — extra synth sounds, extra instruments — and then we put it all together as best we can. Chad is like the sauce that goes on top. There’s been numerous cases where that the little thing he adds ends up making the record. I don’t want to say it’s random, but it’s definitely, Let’s throw everything at the wall and see what sticks. We had twenty versions of some of the songs. At one point with “Lemon” we were on version 18 or something. That was pretty much the norm for every song, different arrangements, different instrumentation in some cases.

Most of it was done out here in L.A. We also did a bunch of recording in Tokyo last Halloween and a bit in London. A couple of the songs were pre-existing songs that have been in the vault for almost 10 years. The “Voila” song with Gucci Mane — his verse was from an old session in 2008. I remember when we played that for him he was joking with us like, “So y’all using this right? ‘Cause this is going on my album if you guys don’t use this.” Only certain elements of that existing song were lifted and an entirely new song got constructed around those bold elements. Several of the tracks were pieced together in a way. For instance on “Lemon,” Rihanna’s part already existed. She was going to use that as her own song at one point and it never panned out. Pharrell has a great way of explaining this when we had listening sessions, he would say to the attendees, “You come into a room and, on the table, you see a bunch of Legos and they’re assembled in the shape of a house. You hear the song, and in the middle of the song, the Legos come apart and they reassemble into a rocket ship. Same pieces, same everything, but they’re just made into a different shape.”

Even though some of the stuff was taken from past sessions, a lot of it also came together in the studio. Kendrick came by and heard a bunch of the songs and Pharrell was like, “I think you should do a verse on this song or this song.” Kendrick was like, “Shit, I’ll do them both.” The only stuff that was done remotely was André 3000, his rap verse on “Rollinem 7s,” and MIA who was in London at the time did her verse over there and sent it in. She actually sent two verses and we ended up taking parts from each and comping together a single verse. We had a lot to choose from with her so we tried to take the most poignant lyrics because she’s talking about refugees and women’s struggles for equality and immigrants and it was really important lyrics so we took the best of everything she was saying and that’s what became her verse for the album.

We had these sonic moods that we were going for with this album. One of the elements was like early ‘80s punk music and more mid ‘80s new wave. A lot of people that heard the music were like, “This totally reminds me of Devo or Gang Of Four or Suicide.” There’s a lot of vocal delays and big reverbs and homages to what they might have done back in the day in that respect. Then obviously the hip hop style production with the big bass, big 808s, heavy Neptunes drums that they’ve always been known for their beats. We had to also consider that as well. It was a marriage of those styles. There was no real recipe for everything. We just did it one step at a time and tried as much as we could and took our time with it. We had no deadline in mind, we were just creating for the sake of making something awesome.