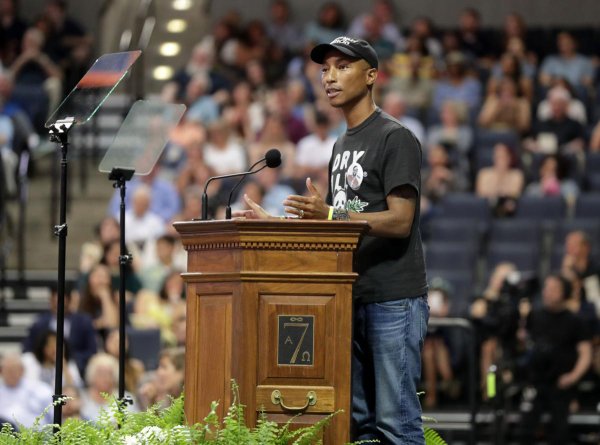 Photos by A. Shurtleff. There must be something in the water in Virginia, Pharrell Williams said at the University of Virginia on Friday — and UVA graduates, whether born and bred or transplants, have an obligation to use their talents to help others. “Virginia has continued to produce icons, and I know that there are a bunch of future icons in this room waiting to reveal yourself,” he said in a fiery Valedictory Exercises address at John Paul Jones Arena.

“But my deep love for Virginia and for its people does not blind me to the fact that there is also troubled water here. In fact, my love for Virginia heightens my awareness that Virginia has a complicated history, a history that continues to shape the present.” Williams is a producer, songwriter and philanthropist who was born in Virginia Beach and performed at the Concert for Charlottesville in 2017. He spoke about challenges endemic to Virginia since its founding, and challenged graduates of the Class of 2019 to fight oppression wherever it is found. 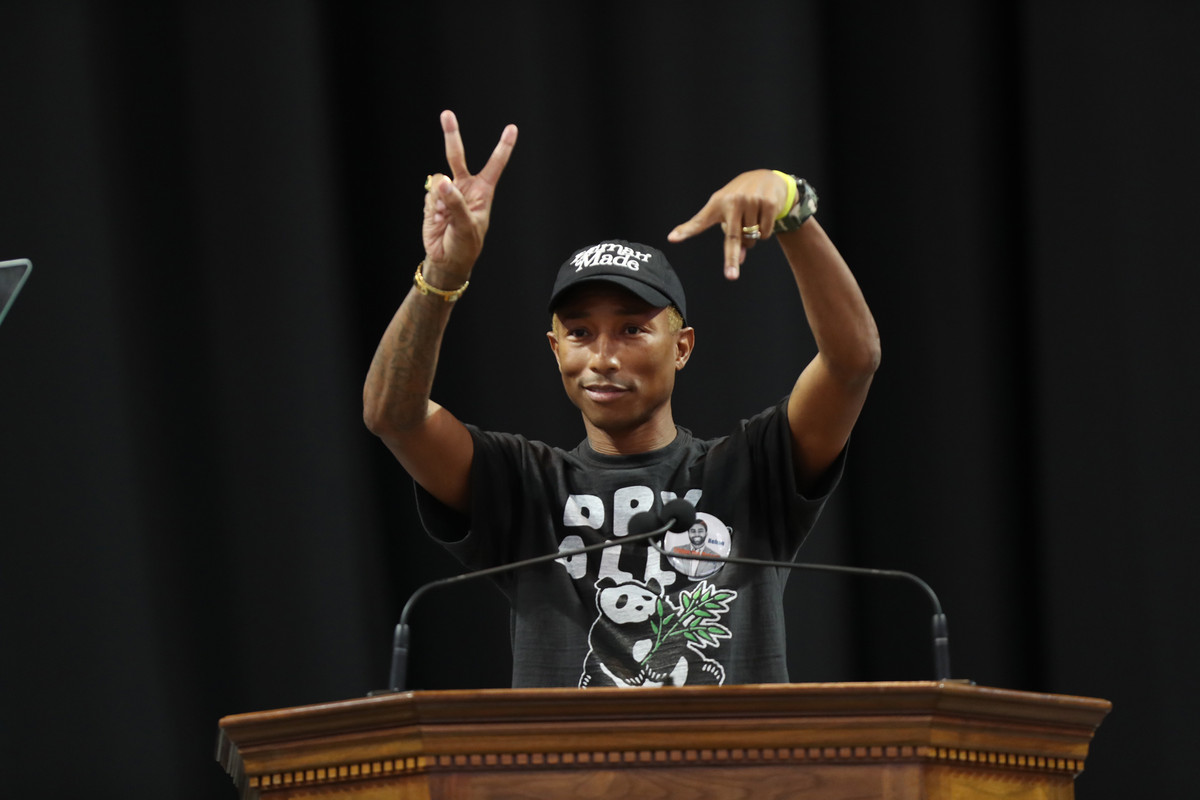 He spoke of his love for the Old Dominion, but acknowledged that the history of UVA, Virginia and the United States is complicated. “The first enslaved person stepped onto the shores of Virginia exactly 400 years ago,” he said. “Those columns outside of the Pavilion, the Rotunda, were built by slave labor.” Liberty has been slow for many and is currently under attack, he said, referencing recent political attempts to curb immigration and remove access to abortion, saying it “seems the Taliban have infiltrated Alabama” after that state passed legislation this week that could punish doctors who perform abortions with life in prison. 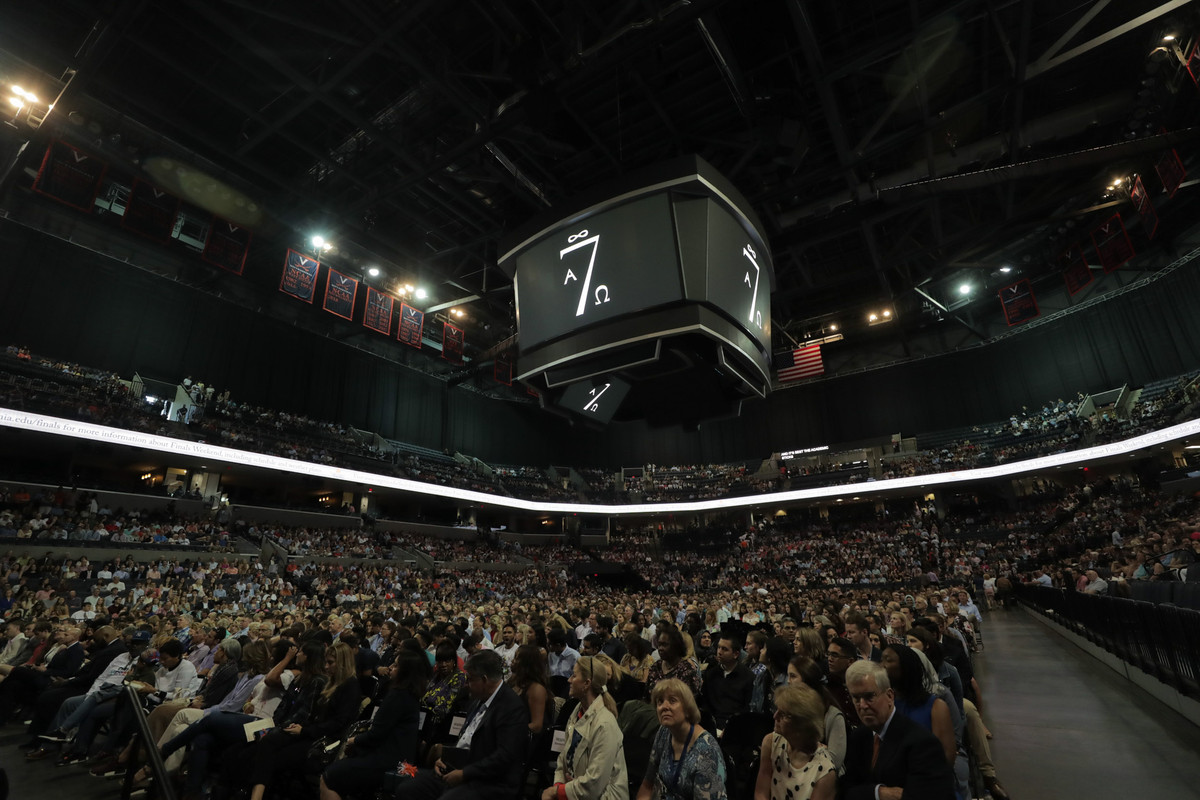 “Some incredible progress has begun, but there’s still a lot of work to be done,” he said. He asked for a show of hands of audience members who had ever felt unwelcome because of their differences. “Keep your hands up, look at these graduates with their hands up — they have accomplished what others told them they never would,” he said. “Once we know the plight of others, we can’t unknow it.” He encouraged the class to go out and use their education, skills and privilege, saying, “The only way to make life better for yourself is to make life better for others.” 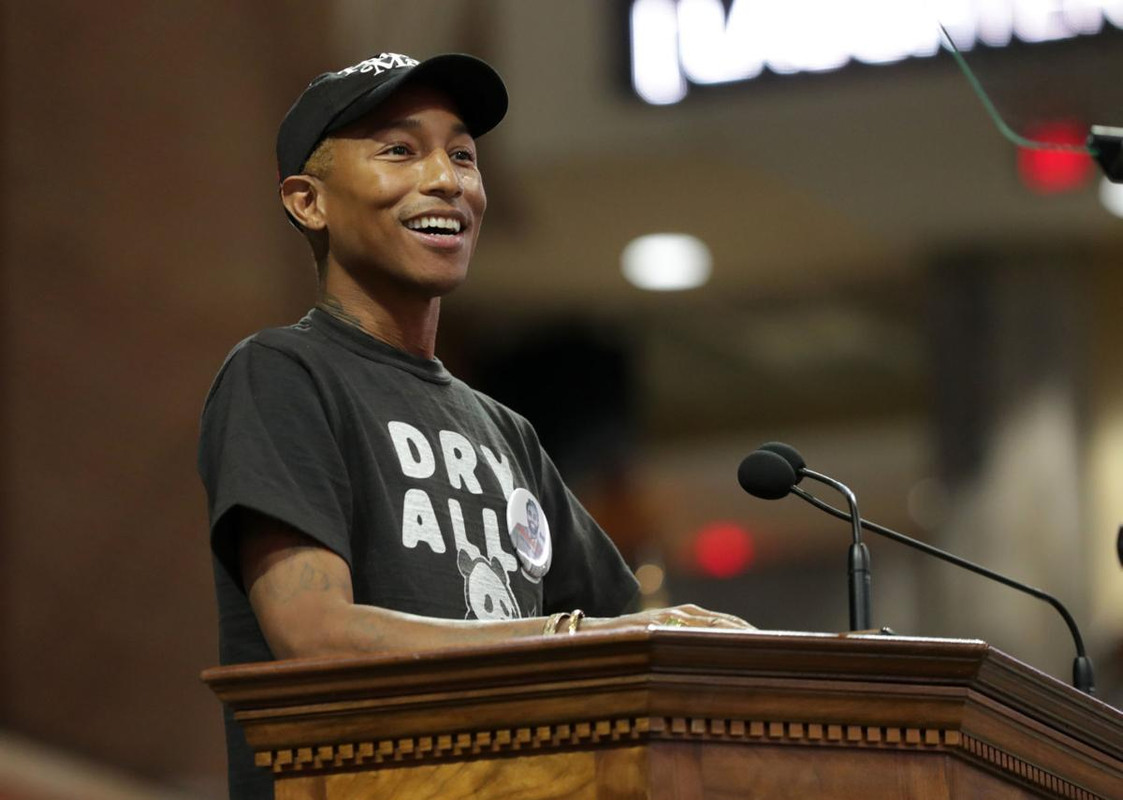 Other speakers spoke about service and members of the graduating class who had worked to improve UVA and Charlottesville. “This is both an ending and a beginning, and we are so fortunate to be here — thanks to a little bit of luck and a lot of hard work,” Wittney Skigen said in opening remarks. The student organization Living Wage Campaign received a commendation for working to improve compensation at UVa. “Since its inception in 1998, the Living Wage Campaign has worked tirelessly to ensure equitable compensation for all in the university committee,” said student presenter Nicholas Tully, adding a reference to the group’s work as a foundation for the university’s decision to raise wages for full-time university workers to $15 per hour in 2020.