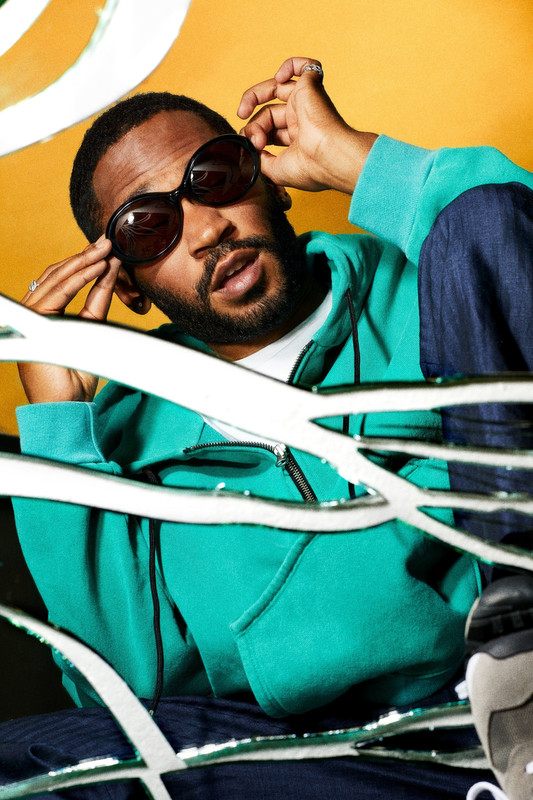 Photo by Matt Martin. You close out BUBBA with “Midsection” featuring Pharrell. As a producer who grew up in the early ’00s, it must have been a dream of yours to work with him.
Of course. Of course. Just doing that interview [on Pharrell’s Beats 1 Radio show OTHERtone] and hearing him say, “Oh yeah, man I’m gonna be on your album,” that was the first time he told me that. Everyone probably caught me on tape tearing up behind my glasses.

Did he reach out to you or did you have to reach out to him?
I had to reach out to him. We made a beat and he’s like, “Yo, put me in the studio!” and he was singing all this stuff. And you know Pharrell—he’s a chameleon. He’s put himself in everybody’s world. And he kind of put himself in my world. So I just played the beat for “Midsection” with the kick and all that. When the beat drops, you hear the kick coming up with the claps and stuff. But he just liked the sample loop that’s going on in the beginning. Dude was just vibing. He was just going crazy and he was coming up with ideas so fast. It was amazing, man! Just like seeing him for real—PHAR-RELL—doing his thing, you know? It’s like, oh shit! He’s very quick. I wish I could be quick like him, ‘cause that’s how successful sessions happen. Me, I’m so not quick. I always take my sweet time.