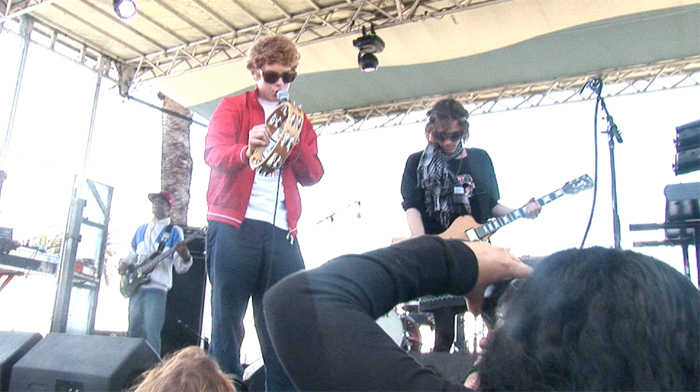 When we last left off, we were in San Diego, having just finished playing a raucous set at Street Scene. When our set’s done, we check out a few of the bands playing on the stage after us (MGMT, the New Pornographers etc.) but we can’t stay for long. We have to drive the entire length of California in a matter of hours because we’ve got a set at San Francisco’s Treasure Island Music Festival. So we load into the van and drive up. After spending the night near Bakersfield, we make it to San Francisco at around 2 PM, which gives us two and a half hours to chill out before our 4:30 PM set. Max and the rest of the band retire to the Chester French dressing room (which is right next to CF fave TV On The Radio’s room) while DA and Lukas check out the view.

Treasure Island is apparently a fake island built in the Bay that served as the home of some sort of World’s Expo type event called the Golden Gate International Exposition (back in the golden 1930s). That’s cool and all, but what’s really phenomenal is that you can see Alcatraz from where we’re standing. Check this out: For those few of you who don’t know, Alcatraz (aka The Rock aka Dwayne Johnson) was the infamous federal prison that housed Al Capone and the famous “Birdman of Alcatraz” (who is, coincidentally, DA’s grandfather*). During its time of operation, only one prisoner escaped. You might be thinking, “Well, good… prisoners aren’t supposed to escape.” Well, stop being so mean to Alcatraz… you hard ass.After checking out the sights of the festival (which includes a ferris wheel), we play a sweet set, cop some free food (courtesy of this bald chef guy–seriously, if we remembered his name, we’d totally recommend him to you) and then got the heck out of dodge. We had high hopes to hang out in the Bay for an evening, but our schedule says we’re due back in LA (and then on to Vegas). Until next time.
*myspace.com/chesterfrench