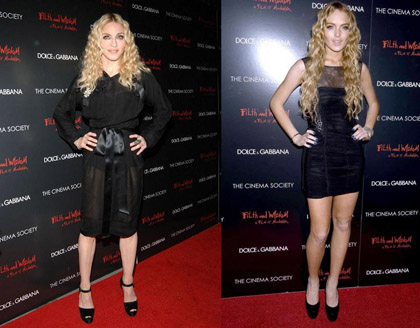 Lohan dropped in for a screening of Madonna’s directorial debut, Filth And Wisdom, where OK! Magazine is reporting that Lohan wants Madonna to sing on her upcoming album, Spirit In The Dark. She was quoted as saying, “That would be incredible…That would be beyond.” When reporters passed the news along to Madonna, she replied, “Yeah, sure. Why not?” Nothing like an enthusiastic seal of approval from one of your heroes!  If Madonna does stop by the studio to make some vocal magic, she will be just one of many big names recruited to contribute to Spirit along with Timbaland, Ne-Yo & The Neptunes.
*afterellen.com