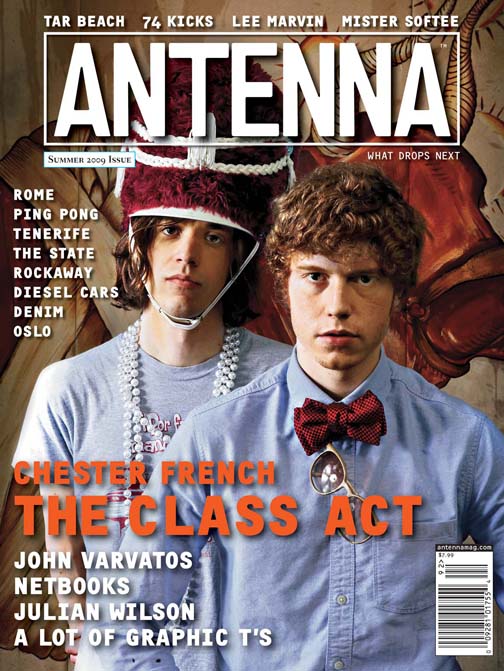 Chester French have been featured on the Cover of Antenna Summer 09′ Issue and did a  interview with Readingeagle.com. There are a lot of things you can become after graduating Harvard – a doctor, lawyer or entrepreneur – but a rock star? Not likely. But D.A. Wallach and Max Drummey, recent grads who make up the pop duo Chester French, are taking an unconventional route with their Ivy League education. Instead of working a 9-to-5 or continuing their studies, they’re busy promoting their debut CD, “Love The Future,” released last month. “We want to be James Brown, we want to be like Led Zeppelin,” Wallach, the group’s vocalist, said. Wallach and Drummey, both 24, studied African-American studies and social anthropology, respectively, when attending Harvard. Wallach, who’s from Milwaukee and Drummey, of Boston, graduated in 2007 and began their career as full-time musicians soon after. “We were just dudes who hung out in the studio all the time making our records and once we finished what we thought of as the first draft of our album, we started sending it around to a million different people,” Wallach said.

“With great serendipity near the end of our senior year, a number of threads connected and we ended up getting opportunities to work with Kanye (West), Pharrell, Jermaine Dupri (and) Pete Wentz,” he said. Though they were courted by all of those heavyweights, they chose Pharrell’s Star Trak label to release their debut CD. They say Pharrell promised to not hinder their creativity. “People might think he would want to exert a lot artistic control, but what he liked was that we were self-contained, and we were producing and engineering and writing everything ourselves,” Wallach said. Their debut disc is a retro-pop mix with soul and rock influences. “We made it in our dorm basement,” said Drummey, who arranged the CD and plays the guitar. The band hopes to appeal to fans who appreciate all genres of music. “We always looked up to acts like Beck or OutKast, who similarly defy categorization but always have a consistent quality to what they do,” Wallach said.