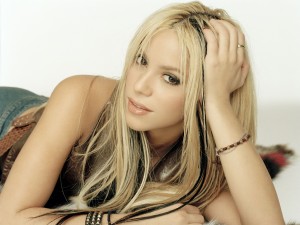 Popjustice.com went to listen to some tracks from the new Shakira album last Thursday and Shakira has revealed that she decided to concentrate on the dance genre when recording her new album. The 32-year-old singer realised that she wanted to transform her sound after teaming up with Pharrell Williams for her latest studio disc, which is due out on September 21. Speaking to the Daily Star, she explained: “It’s all about the bottom end. I really wanted to explore different dance beats and cultures on the new record. I did my research and looked into different kinds of rhythm. Plus Pharrell is a genius with beats so it came together really fast.” “I’m always trying new things. It’s important for me to keep interested. But the main thing was I wanted to be able to dance to this record.”

After five songs, the playback is finished and everybody gets a bit embarrassed and then some ‘drinks’ arrive and everybody ‘loosens up’. Except nobody really loosens up. What happens is that Shakira does a meet and greet with all the journalists and radio people. She probably does this in most of the ‘major territories’ she visits. It must be incredibly tedious. Suddenly all these media people become competition winners; they queue up and are introduced to Shakira, who says some very specific complimentary things to each person Almost as if she has Been briefed and has her picture taken with some of them. Watching the photo bit happen is totally fist-gnawingly embarrassing. And then it is all over. We made some notes about the songs, reproduced here in loving detail. As you can see they are a total mess and are bordering on illegible.

Did It Again (Neptunes)
This is a Pharrell co-write/co-production and is BRILLIANT. It doesn’t really sound very Pharrell-ish. It is probably more brilliant than ‘She Wolf’, actually. It should be the next single. The chorus goes “I did it again, I got it all wrong, but it feels so right”.

Long Time
A low-slung sort of affair. “I wish I had longer legs that I could fasten to your body so you’d take me with you everywhere.” *Glasses steam up*

Another song whose name we didn’t get. Can’t remember how this one went. This is probably quite a sloppy comparison but the ‘She Wolf‘ album does have shades of Nelly Furtado’s reinvention a few years ago – it’s not quite as extreme and it doesn’t jettison the artist’s core values quite as fiercely as ‘Loose‘ did, but there’s a similar sort of vibe. What’s important about the tracks from ‘She Wolf‘ that we heard last week is that they’re clearly – unmistakeably – Shakira tunes, but they also find Shakira pulling herself in slightly different directions which, this far into her career, is an important factor. The fact that they’re directions both creative and commercial is even more exciting. Thanks To Borsboom