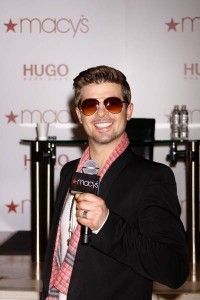 Soul star Robin Thicke is set to become a dad. His actress wife Paula Patton is pregnant with the couple’s first child. Publicists have confirmed the happy news just weeks after Patton told Giant magazine she had “stopped taking birth control” in an effort to get pregnant. The actress told the publication she had been mistaken as Thicke’s pregnant wife in 2008 when she showed up to the opening of Jay-Z’s 40/40 Club in Las Vegas, wearing an ill-fitting dress that gave her what appeared to be a baby bump. She was horrified when red carpet photos led to industry speculation. Patton says, “We went to Bora Bora for a vacation, and Robin got a text from (director) Hype Williams, and it said, ‘Congratulations…’ He said, ‘People kinda think you’re pregnant.’ “It was heartbreaking because, after everything – all the work I’d done – that was all people knew me for.” Patton admits she wasn’t ready to become a mum a year ago, but that all changed a few months ago: “I’ve stopped taking birth control. I’ve been on it since Robin and I started dating. “I’m really not a planning person, but I do know I want to be a parent.”

Paula Patton missed out on prom night because boyfriend was White. Actress Paula Patton refused to attend her high school prom with the man who was to become her husband – because he was white. The Deja Vu star has been dating soul singer Robin Thicke since they were both teenagers and she has only recently told him why they missed out on prom night. She explains, “I didn’t want people to know (we were dating). I didn’t want people to call me a sellout or an Oreo, because I’d gotten that my whole life and it wasn’t the truth. “I actually just admitted this to Robin not too long ago.” But Thicke tells Giant magazine he was far from surprised: “She had actually told a couple of people I was black. “Then prom night comes, we’d been together a year and a half, and she just lies and says she didn’t want to go instead of saying she didn’t want to take me.” Patton finally gave up her fears about what friends would think about her interracial romance and went public with her boyfriend, who became her husband in 2005. The couple is now expecting its first child.