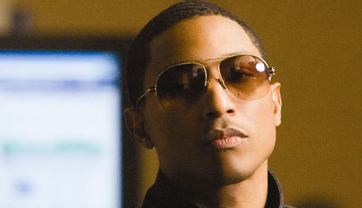 Hip-hop star Pharrell Williams has said new acts should be chasing advertising agencies rather than looking for record deals. Producer Williams, who fronts the band N.E.R.D., said budding stars should strike music publishing deals to ensure they get paid whenever their music is used. Speaking to the BBC at the Midem music conference, he said acts should “market” themselves. He added they should build websites to showcase their music and personalities. Asked what he would do if he was starting out today, the singer and producer told the BBC:

“I would probably build a site, a home for my music, a destination where people could come and see me and what I do and what I’m thinking about. “And then I’d probably assemble a team of kids that would go and bug the hell out of advertising agencies and marketing companies to use my music.”But backtracking a little, he added: “It’s not that it’s necessarily the day and age of independent artists and independent record companies. “There’s a lot to be said for the majors too. The majors still have a purse that the average kid doesn’t have. But what a kid has that everyone else has is that same ability to market yourself and get yourself out there.”