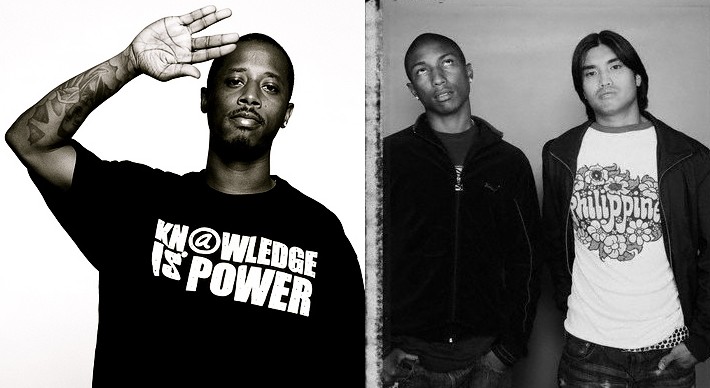 Whoa now… y’all remember this beat ? That beat was made back in 2004 from Fam-Lay’s Traintogo session with Jadakiss on it but it seems like it went to Boo-Bonic’s solo album ‘Young, Rich & Famous’, The Neptunes gave Bonic three tunes, so this is one of the three tunes and possibly his lead single. ‘When we got signed to Atlantic there was the A&R his name was Rich. There was also this guy named Ashton Chambers who runs Ice Cream now, so he used to work for Nike so he had a connect with the Nike stuff so he gave it to Pharrell. I guess Pharrell was trying to sell beats to people at Atlantic at the time.

So he was going over there meeting with Ashton to, so we kind of met “Pharrell” at the place, and Rich was with us, and Rich already knew him, and he was like, “I want you to work with my guys,” and he heard us spit and we spit acapella for like 45 minutes over and over. And after that it was a wrap. What I’m doin’ now is “Young, Rich & Famous” my Solo Project. M.J. got a single with Swizz Beatz and I got a single with Pharrell. We both got all kinds of records with everybody out there, such as Cool & Dre. Pharrell gave me three new beats for my solo project. Basically, we goin’ come sideways at ‘em like that and wildstyle ‘em’