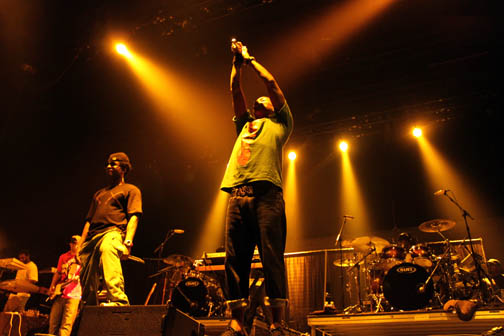 N.E.R.D. will join headliner Drake, along with K-OS, and Francis and the Lights on April 30. Tickets go on sale at 10 a.m. Tuesday for students only, online at suathletics.com. The students-only buying period ends at 4:30 p.m. Friday. Tickets will be in three sections: reserved seating for front stage and second level, and general admission for the rest. They are $15 for students. Tickets go on sale to the general public at 10 a.m. Tuesday, March 16, priced at $25.

Although the other artists’ appearances were announced two weeks ago, legality requirements and paperwork delayed the announcement of N.E.R.D. “I think this is a show that people have been waiting for,” said Kevin Manley, co-director of concerts for UU. “They’re incredibly well-respected, people know their music and people love Pharrell. We wanted to make sure we didn’t have too many rappers with DJs,” said Deniece Holley, fellow co-director of concerts for UU. “Even if you don’t like Drake, that doesn’t mean you won’t like N.E.R.D. I like Pharrell. He’s pretty popular,” Dumas said. “I think (N.E.R.D) will do more than enough to keep people’s attention until Drake comes on.”

Because Syracuse University was one of only three schools allowed to book another large group alongside Drake, UU said it was anxious to add N.E.R.D. to the Block Party lineup. “We were surprised at how successful the Girl Talk show was and decided to do something that echoed the same dance party atmosphere,” Manley said. “That considered, it was a no-brainer to bring N.E.R.D. to campus. People are still talking about that show, even though no current undergrad was here for it,” Manley said. “We’re going to have Drake and Pharrell on the same stage. It’s awesome. It’s going to set that standard for people five years from now to talk about.”