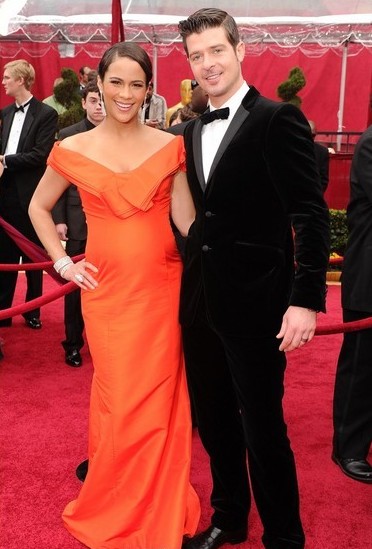 Paula Patton is positively glowing as she walks the red carpet at the 2010 Oscars held at the Kodak Theatre on Sunday (March 7) in Hollywood. The Precious actress, who’s expecting a child later this year, was accompanied by her husband, singer Robin Thicke.

He stood by his wife’s side as she went to cheer on Precious. In the meantime, Melanie Fiona’s over six week run on the R&B/Hip Hop Songs chart has officially come to an end thanks to smooth crooner, Robin Thicke. Late last week Thicke’s single “Sex Therapy,” from the album of the same name, rocketed to the top of the chart.

A follow up to hits including “Magic” and “Can You Believe,” “Sex Therapy” is Thicke’s second single to top the chart. It follows the 2007 breakthrough single “Lost Without You“. Thicke’s success wraps up what ended up being a several week strong hold for Grammy nominee Melanie Fiona.