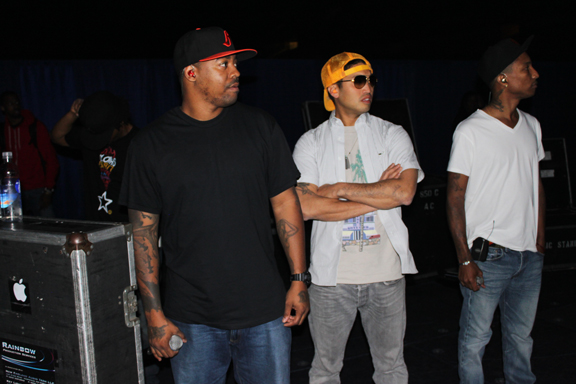 To see your wishes confirmed that someone was touched by it, that someone got hired because of what they heard on this album or somebody had a better day or someone was assisted through a grieving moment from listening to this album. All the positive aspects — that’s a good thing,” he offered. “And, of course, when there are babies made to the N.E.R.D. music — responsibly.” The guys don’t plan to rest anytime soon. They are set to join select dates on Erykah Badu’s Out My Mind, Just In Time tour and are also planning to visit various festivals throughout Europe and stage a few shows at home here in the States. Pharrell urged fans to be prepared.

“Go online, go to N-E-R-D.com so that you understand the things that you need. You’ll need more than just a water bottle for our shows, at least in the festivals overseas. … Get your stretches in — the EMTs are always on the side, because people pull muscles and stuff. And not bragging at all, I’m just telling you, dude — fat, black, white, skinny, gay, straight, I don’t know how they treat you elsewhere at their shows, I don’t know how they treat you in streets, [but] I know how you feel when you’re going to leave that N.E.R.D show. And trust me, when they ask you what it was like, and could you describe it, could you ever put it into words — you’re going to say, ‘Nothing.’ ”