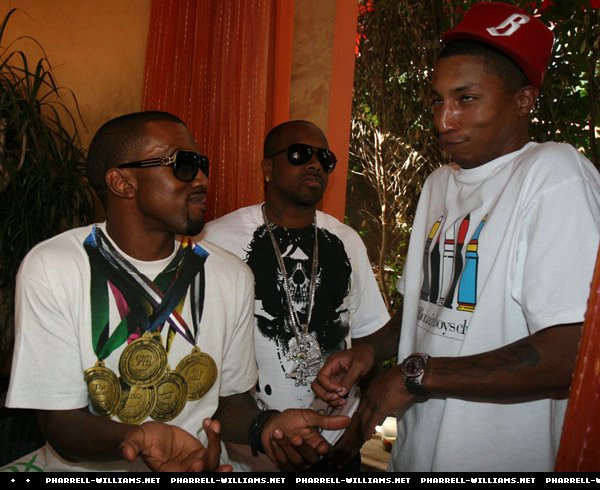 The vagabond known as Kanye West finally reappeared in the United States this past weekend in Soho with Virgil Abloh and Don C. Later that night Kanye, Kid Cudi, and Plain Pat all hit up the CV Lounge and previewed four new tracks from West’s upcoming album. Now from what I hear from my sources, everyone at the listening session was sworn to secrecy, but this is what we do know. Rumor has it that the name Good Ass Job, may not even be the name of the album. There is a title of the album floating around which has been sworn to secrecy by Ye’s inner circle, but Good Ass Job, which West said would follow Graduation in previous albums and live shows, might not be the name of the album after all. Another tidbit which was heard about Kanye’s album is that one of the tracks that was premiered at the CV Lounge this weekend was a joint called “That’s My Bitch,” we can only assume that song is an ode to Ye’s muse, Amber Rose.

DJ Premier, DJ Semtex, and Pharrell are all also some of the people who can testify to the new direction of Mr. West’s music and all have had the same sentiments about Ye coming back to “shock” people. Pharrell is quoted with saying: “I had the chance to listen to the new Kanye West album. I think that people are going to be shocked. His precedent was crazy, this new one goes even farther.” DJ Semtex agrees with Pharrell sentiments stating, “All I can say is it is banging. If that’s a taste of what’s coming on the album, he has smacked it. Lyrically….he is saying things like, ‘Wow, he said that?’ It is going to shock everybody, the first record.” Also there are rumors circulating that Kanye will perform his new single at his June 8th fundraiser in Chicago, which also happens to be his birthday. The plot thickens…