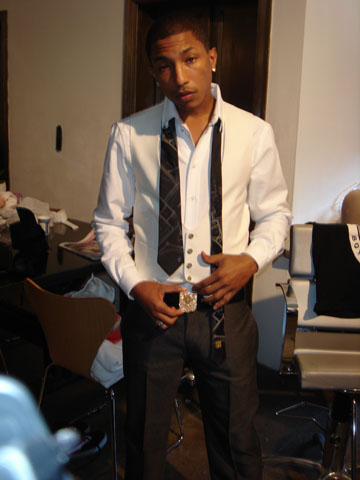 The L.A. Watts Times caught up with the affable, 30-something musician with boyish good looks to discuss the process of writing original music for Universal Pictures and Illumination Entertainment’s film and how much he enjoyed being “Despicable.”

L.A. Watts Times: How did you become involved in this project?
Pharrell: The music director at the time was Kathy Nelson at Universal Studios. She and I had done “Tokyo Drift” and two “Fast and Furious” projects. She had a project called “Curious George.” She worked with Jack Johnson, and he was able to not only score, but do original songs for the film. And, I was so envious. I was like, ‘Look, you know, I gotta be honest with you.’ Jealous is the word I used, but honestly it was envious. I am such a kid. I eat breakfast cereal at two in the morning when I don’t have much to do the next day. I’m up late at night eating cereal and watching Boomerang cartoons. Boomerang played all of the cartoons I was raised on. You know, Looney Tunes, Bugs Bunny, Daffy and the gang. Also, the Smurfs, which was around ’82 when I was a kid. … That’s a big part of my personality. So, in explaining my affinity for animation and how it would be completely a dream come true to be a part of it, she said, ‘OK, fine, I understand.” Cause she could see in my eyes that I was hurt. Like, ‘Why wouldn’t you ask me?’ You ask me for like hip-hop records. I was saying, ‘Man, don’t you know enough about me. We’re friends. I’m a big, huge kid. I’m the first person you should ask.’ She said, ‘The next thing that comes on my desk, you’re going to be the first person I call.’ And, so, she did, and it was “Despicable Me.”

LAWT: You’ve never written anything depressing, sad or mean. How did you get in a despicable state of mind?
P: When you look at Gru, he’s a guy that has issues. Now that I’m the age, I am I know why personalities are the way they are. They are weathered entities. We’re all just walking molds. You can see what we’ve been through. Gru was much like that. He was so mean, but had a lot of fun. I thought he had a Grinch type of feel. But, you begin to realize the Grinch did it to be dastardly; Gru did it because he thought that was the way, because that’s the way he was treated as a child. He learned to have more enjoyment in being mean to people because he thought that was the only way. It was me, Chris Meledandri (producer), Kathy Nelson and my manager. We were all sitting around in the control room on the couches and I was like, “I’m having a bad, bad day. It’s about time that I get my way.” And, I just thought about it from the perspective of someone sitting in traffic. That’s where Gru’s theme comes from.

LAWT: What is your creative process for this film, versus working with an artist?
P: When I’m producing for an artist, usually I look at them. I usually do deductions. I look at them and deduce what is missing. With this, it is not looking at a personality and choosing out of four or five templates for how a song goes. You gotta figure out a way that when they go down, you feel it.

LAWT: Take us into your world. How do you work?
P: You score scene for scene. You’re not scoring like one thing all the way down, which would be interesting to try to do. It happens in fragments. Most of the time when I would see something, I would just play what’s in my head right then and there. Then when you put against a film, maybe this part didn’t work, but then it gives you a really brilliant idea. It gives you a great option and that option ends up being even better and you just stand back.