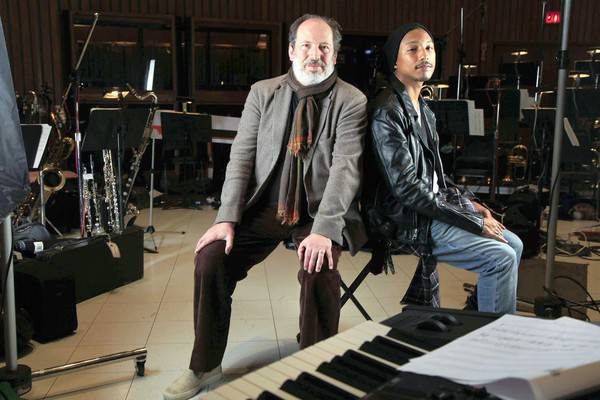 The two had only one rule when writing the music for the awards show: Try anything. And they did, drawing from Zimmer’s evocative film scores and Williams’ beat-driven sound art. The first time Hans Zimmer made Pharrell Williams‘ head spin was in 2005, when the former was composing the score for the Ron Howard blockbuster “The Da Vinci Code.” Williams, half of the lauded hip-hop production duo The Neptunes and a third of the experimental rock group N*E*R*D, had heard through a mutual friend, music-supervisor Kathy Nelson, that he and Zimmer (one of Hollywood’s most in-demand composers, with Oscar- and Grammy-winning credits including “The Lion King” and “The Dark Knight“) were fans of concept-based composing styles.

“The Fibonacci sequence figured heavily in the movie, and Hans was inspired by it to compose a piece that played exactly the same way backwards as it did forwards,” Williams said. “When I heard that, I thought, ‘This is a guy I can be friends with.'” That friendship has turned into an unexpected collaboration on one of the globe’s biggest stages — this weekend’s Academy Awards. In a basement recording studio at Capitol Records the weekend before the Oscars, the composers were rehearsing dozens of pieces of new music they’d written for Sunday’s telecast, drawing from Zimmer’s rangy, evocative film scores and Williams’ minimalist, beat-driven sound art.

This year’s Oscars ceremony pays relatively little attention to music (this year’s original song category has only two entries, from “The Muppets” and “Rio,” and bucking tradition, neither will be performed live). The high-profile duo of Williams and Zimmer, however, may give music fans more reason to pay attention to the show. Zimmer and Williams first collaborated on 2010‘s Steve Carell-voiced animated comedy “Despicable Me,” where Williams produced four original solo songs and several other character-sung pieces, with Zimmer as co-producer.

For the Oscars‘ commission, which involved composing for interludes and walk-ons and arranging segments of the five nominees for best film score, they had only one real rule — try everything. “We went crazy. We wrote new music for everything,” Zimmer said during a lunch break between rehearsals in the Capitol Studio. “Some people had told us that the Oscars score is all about repeating everything. But that’s just not how we’re built.” Zimmer and Williams kept mum on many of the score’s specifics, though Zimmer did promise that “you might see some odd faces in the orchestra.”

“There will be a few surprises — it’s diverse and international in the way that only musicians can be,” he added. A walk through the orchestra’s rehearsal room showed a huge array of instruments being used, from traditional brass and woodwinds to electronic drum triggers, rock instruments and a wide variety of synthesizers. The composers would seem to come from vastly different schools of arranging. The Neptunes were behind hits for Justin Timberlake, Jay-Z and Snoop Dogg, with tracks built on airtight drum loops and avant-garde synth samples. Zimmer is an inspired film-score mercenary who can conjure epic sentiment or creeping, slinky dread depending on the job.

But the two have more in common than a cursory career overview might suggest. Williams started his music career as an orchestra drummer in high school, and Zimmer’s first break came when he produced the Buggles’ hit “Video Killed The Radio Star“; its video was the first ever played on MTV. In the Capitol rehearsal room, where Williams was dressed in a leather jacket and skull-painted high-tops, the famously effusive Zimmer humbly said he had provided only a basic framework to a composition and passed it off to Williams. “My role was minor, more of a safety net,” he said. “Pharrell knows everything and has just impeccable taste.”

In a year where chaos seemed to reign in planning the telecast (the production changed hosts and producers months before the ceremony), the adventurous composing team might be one of the night’s more reliable elements. The job is like few others in composing, where an arranger must carefully attend to the pure functionality needed for a long broadcast to a mainstream TV audience, while staying charismatic and representative of its composers’ idiosyncratic personalities.

Even Williams, one of the most reliable and revolutionary hit makers in pop music, had to use the language of superheroes to describe the scope of what they’d written. “Hans really is Professor X, and his company Remote Control Productions is his Xavier School,” Williams said, evoking the team of mutants in the “X-Men“ comic series. “From my perspective, I got a university education from him.”