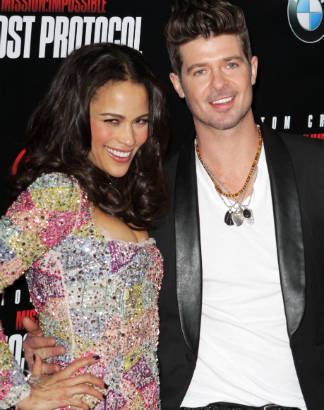 By Asha Ladwa. R&B crooner Robin Thicke has admitted to playing a nasty prank on actress wife Paula Patton by telling her that he’d crashed her car, leaving her “distraught.” However, immediately after pulling the practical joke, the ‘Love After War‘ singer later admitted to his stunning wife that the news was false, and instead surprised Patton with a brand new vehicle.

The 35-year-old singer admits that the white lie very nearly made his Mission Impossible – Ghost Protocol actress wife Patton become emotional – until he handed her the keys to her brand new ride. “I lied and told my wife I totalled her car. She was distraught, but when I took her to the garage to see it, there was a brand new car I had just bought her instead!” the Duets judge told People Magazine. Seems like Thicke hasn’t lost his cheeky side!