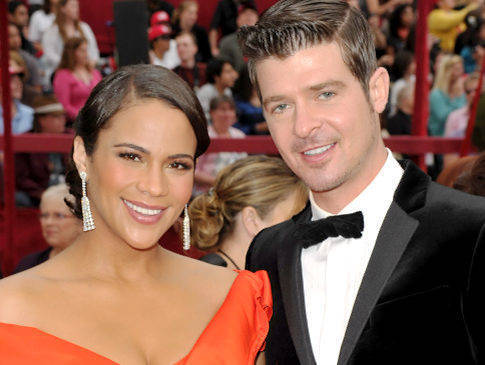 Robin Thicke is a mentor on the new ABC singing series “Duets,” but the R&B crooner could find himself partnering on a song with his 2-year-old son or his wife, actress Paula Patton. Thicke says both his wife and son can sing. Patton, whose film credits include “Precious: Based on the Novel ‘Push’ by Sapphire” and “Mission Impossible 4,” sings a small part on a song Thicke produced for Usher, the slow groove “Can U Handle It.” It appears on Usher’s Grammy-winning, 2004 effort “Confessions,” one of the last decade’s top-selling albums.

“The song called for a female vocal, a very simple, more like a talk-whisper part and … I said, ‘Hey, honey, you mind putting something down for me?'” he recalled. “And of course it turns out to be Usher’s biggest album and one of the biggest albums of all-time.” Thicke, 35, said Patton would ask him, jokingly, to let her sing on songs he worked on. “She’d be like, ‘Hey, baby, can I just sing a little song just so I can hear my voice on tape?'” Thicke said. “And I was like, ‘No! We’re not starting that. We are not going to get into the ‘you recording an album.’ Go find another producer if you want to do that.'”

Thicke says there are no plans for Patton to release her own music, though he admits: “She does a mean impression of Marilyn Monroe’s ‘Diamond Are a Girl’s Best Friend.’ But nobody is allowed to see that. That’s just for daddy.” Patton gave birth to the couple’s son, Julian Fuego Thicke, in 2010. Thicke says he also has singing skills. “He has incredible pitch,” Thicke said. “He wakes up every morning and before he even cries to be taken out of his crib, the first thing he does is sing. He just kind of lies there in his crib and sings songs for a little while.”

Thicke says he’s let his son tag along when he tapes “Duets,” which debuted last week and airs Thursdays at 8/7c. It also features Kelly Clarkson, John Legend and Sugarland’s Jennifer Nettles, and each week the Grammy-winning singers perform duets with amateurs, one of whom will go on and win a recording contract. Thicke, who came on the scene in 2003 with long hair and rock-influenced sound, is best known for No. 1 R&B hits like “Lost Without You” and “Sex Therapy.” He says it’s hard to see himself onscreen: “I can’t watch myself on anything for more than a few minutes. I’ll never watch ‘Duets’ — that’s for sure. I’d watch it if I wasn’t on it.”