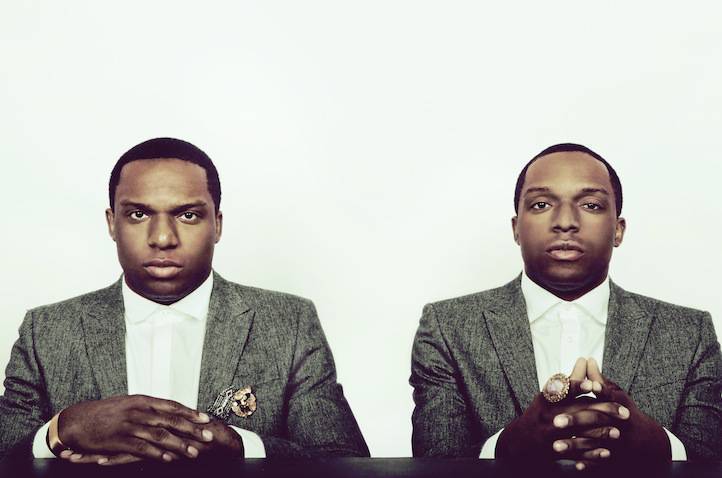 Christian Rich On Hip-Hop, House, and EDM
Asking who Christian Rich is, or what exactly it is that they do, will bring you a varied list of answers. DJs, producers, artists and songwriters, twin brothers “Christian” and “Rich” combine to form one solid jack-of-all trades. Born and raised in Chicago, music has taken the two across the country and around the world, and they’re still looking to expand on their resumes. Along with a unique sound, they’ve developed a reputation for high-quality, in-depth music videos, as well. Life+Times recently caught up with the duo to gain some insight on their under-the-radar talent.

L+T: You both seem to do a lot of very different things. Who exactly is Christian Rich?
CR: In a nutshell, Christian Rich is just a brand of good everything. Whether that’s music, fashion — hate to sound so cliche — art, so forth, we just like good things. Music just happens to be the way that we introduced that quality to the masses. Our next level might be real estate, acting, film, fashion — whatever it is is gonna be quality. Christian Rich — especially these days — mainly is DJing. We’re doing more house, EDM and a little bit of dub-step stuff. We’ve been doing it, but we’re really pushing forward. We’ve been in Europe a lot this past year-and-a-half. On the production end, it’s the same thing we’ve been doing and more, making big records, hit records, pop records, and breaking new artists.

L+T: From a production standpoint, who are some of the people you’re currently working with?
CR: We’re on Rye Rye‘s new album, [as well as] John West, Pusha T., J. Cole, Lupe Fiasco, and this kid named Marcus Canty that was on X-Factor. We did a dope record for him, some cool R&B stuff that we don’t normally do. A few others, too.

L+T: How it is to work with your brother? People mention special chemistry that exists between brothers, twins especially. Is that the case at all?
CR: It’s cool. It’ just like working with one of your friends. We usually work separately and then we bring everything together. We live together, but we have our separate spaces in the house. Usually we both start with different ideas. I [Rich] will throw a whole bunch of ideas together, and he’s good at going somewhere and fixing and finishing it up. If he starts an idea, before he finishes it, I’ll go in and tweak it and add my creative stuff, and then he’ll go back and clean it up. We have our expertise in what we do and that’s what makes it great. He writes probably 90 percent of our stuff. It’s a great chemistry. I’m always the one that will take it to the limits, then he’ll bring it back and be like, ‘This is how we need to get it so people can understand it.’ It works well.

L+T: So then, how would you define your sound?
CR: I can’t really describe the sound because it’s so many things. I’d say very chord-driven, hard-hitting songs. Songs that could be like a John West song that you just relax to, but the chords are crazy, the drums hit. Then you’ve got the Rye Rye song, where it’s not necessarily chords, but the trumpets on there make you feel like you’re in a stadium and they hit so hard. Everything we do, we try to bring in that hip-hop element, but with the softness of house chords and R&B chords. We try to take you to a magical world, but still you remind you that you’ve still gotta feel kinda hood. It’s a blend of that, if that makes sense.

L+T: What is that allows you all to move seamlessly between these different genres, from hip-hop to house, find a happy medium and make it cohesive?
CR: One, it depends on the artist we’re working with. If you’re working with a Rye Rye, or someone like her, you already have an advantage. Whatever she makes is gonna create the new sound for both of those worlds. Second thing is, we try to brand ourselves like that, where you can’t put us in a box and say they just make 808 hood records, they make R&B records or whatever. If anything, we’re more into making EDM records, we want to be known for that. It’s kind of like what Diplo is doing. We want to be able to make all of these crazy hood records, but we also want to make just as effective EDM records, where you won’t even know the same person made it. We just try to be actively involved in both worlds, truly understanding what’s going on in hip-hop — the new artists, the new sound, creating the sound –and effectively know what’s going on with EDM – the new artists, underground artists, mainstream artists, everything. So it’s hard work, we literally research everyday.

L+T: How did Chicago shape you, and how have your travels around the world also influenced your music?
CR: Chicago makes you kind of tough, especially from dealing with naysayers. Because you deal with so many no’s, you kind of become accustomed to it. So when someone says yes, you’re like, ‘Oh, what?’ Any yes, you go with it. It gives you a tough skin and lets you know the realities of the world, so by the time we got to New York, it wasn’t a surprise to us to see how tough it could be. That was great. Then you come to LA and it’s the opposite of the whole East Coast. It’s very chill over here — there’s so much space here, you can create your own kingdom. You have enough space to create your own world and you invite people into it. Then you have Europe, which is one of the most amazing places — Eastern Europe to London, Germany, Switzerland. They like what we don’t like any more. All that R&B stuff, all the chords where we’re like, ‘Oh, that’s old,’ [they love that.] If SWV went overseas right now, they’d sell out 20 shows. They still appreciate quality music and they’re not afraid to try something out. They love shows. The live aspect for them is more important than just hearing the record on an MP3. You see that and it inspires you that there is another side of the world that appreciates more than just one-hit wonders. They want to be a part of your world and they appreciate the merchandise and all the things you bring to it besides music.

L+T: Was house and EDM something you all were always into?
CR: Oh yeah. I was always into house. EDM is a little different. EDM is a mixture of house, hip-hop, R&B, i.e. Rihanna‘s “We Found Love”. Growing up in Chicago, the first house song we were into was Daft Punk‘s ”Around The World” and Stardust‘s “Music Sounds Better With You.” We lived on the North side, so we grew up around a lot of gangs and a lot of bullying. You didn’t really let people know you were into that. But my homeboys listened to all these house records because we liked the chords. We don’t care if the beat moves fast, we just like the chords. But there was never a space in our minds. Hip-hop was more of what we wanted to get into. Even though we wanted to do house, we didn’t see the realistic space to be in. We didn’t realize that you could be so good at DJ’ing. We’ve been DJ’ing since college, for over 10 years. We didn’t realize you could become very successful at this in life, so we stuck to hip-hop because we’ve seen the Pharrell’s, the Kanye’s, we know that’s the path to take. When Black Eyed Peas and David Guetta came out, we started to see that you could make a career out of this. That’s when we started discovering all the other DJs and we were like, ‘Wait a minute, we can do this!’ We’ve been thinking about this for 10-15 years. You can actually be a successful DJ and producer in EDM, and not necessarily have to do hip-hop all day.

L+T: You seem to take your time between song and project releases…
CR: We take our time with projects and songs because we’re primarily producers and DJs. That keeps up going. We don’t put out songs to make money. We put them out to grab an audience, get them engaged and build upon the brand. We take our time because we like to make sure that it’s accurate and correct. Nothing’s ever perfect, but we try our best to make it perfect. If we’re doing Christian Rich the producers, then we’re zoning out. If we’re doing Christian Rich the artists, then we’re zoning out on that. We’ll take a three or four month break, go somewhere and record. I think quality is always better than quantity.

L+T: The visual aspect of your music has a strong look. Why the emphasis on that?
CR: A lot of the product we have out there, it’s not always exactly what we want it to look like. But we start to realize that it’s probably too much for the audience. So the “Till Dawn” video is supposed to be even crazier. The theme of that video was these ballerinas fighting each other. We took Murder By Numbers and we took the idea from Black Swan. We wanted to set that sinister tone. When we do videos, we think of movies, and that’s where we’re leading to now. Me and my brother are starting to do film. We’re actually doing a seven minute film where we’re filming it ourselves, doing the treatment, everything. We like to push our creativity and still have the audience get it, so we take our time watching movies, examining stuff from all over the world.