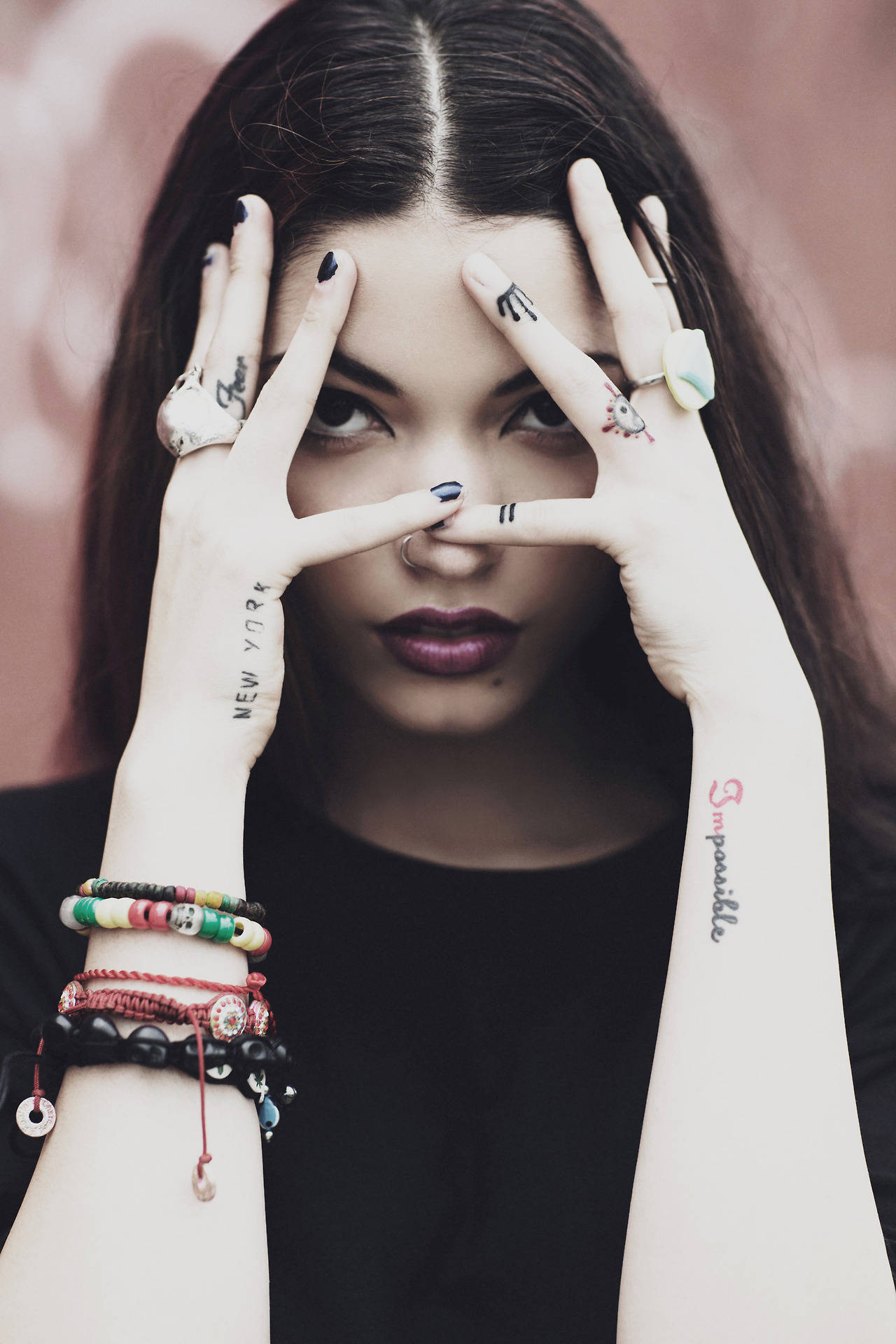 Espiritu Libre
Hailing from the worn streets of South Brooklyn as the daughter of salsa musicians, Maxine Ashley’s culture is her liberation. Her hair is pink, well half of it at least, and her spirit is alive to the ethos of life. Her fans adore her. She’s a YouTube sensation, capturing you in four-minute life cycles. Honestly, she doesn’t even have to be singing for you to love it. The flexibility of her sound from video to video is woven together with the autonomy of her charisma (which is showcased beautifully in the beginning of her videos with a playful gangsta, “Wassup YouTube!” shoutout.)

Ashley bolsters an impressive 60 videos on her YouTube page with an audience of more than 3 million lifetime views. Most videos are of her singing covers; or hanging out with Pharrell; or creating choreographed laser shows using neon finger gloves. No matter. Whatever the video, you get to hang out and live vicariously through her for a few minutes at a time each week.

Maxine is set to release her mixtape, “Mood Swings” and an album later this year. WTU spoke with the quite approachable and almost coy young starlet to answer our questions about how she’s preparing to take over the viral world while embracing the indulgence of her youth. 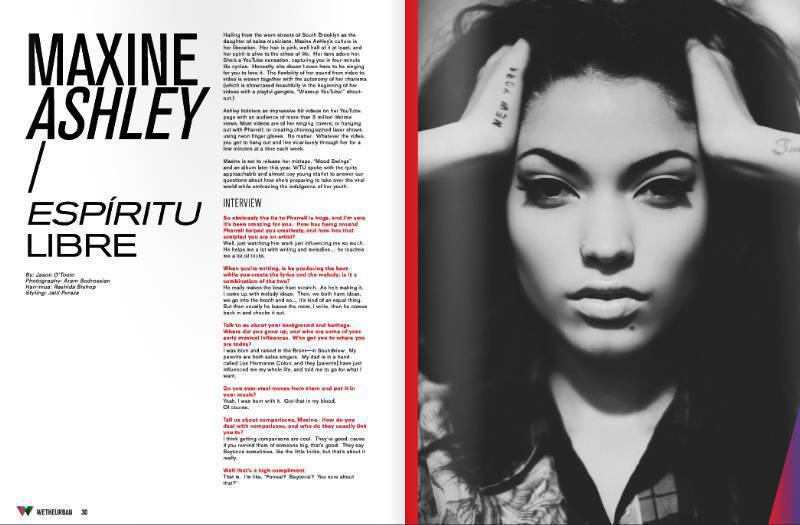 So obviously the tie to Pharrell is huge, and I’m sure it’s been amazing for you. How was being around Pharrell helped you creatively, and how was that sculpted you as an artist?
Well, just watching him work just influencing me so much. He helps me a lot with writing and melodies… he teaches me a lot of tricks.

When you’re writing, is he producing the beat while you create the lyrics and the melody; is it a combination of the two?
He really makes the beat from scratch. As he’s making it, I come up with melody ideas. Then, we both have ideas, we go into the booth and so… it’s kind of an equal thing. But then usually he leaves the room, I write, then he comes back in and checks it out.

Talk to us about your background and heritage. Where did you grow up, and who are some of your early musical influences. Who got you to where you are today?
I was born and raised in the Bronx-in Soundview. My parents are both salsa singers. My dad is in a band called los Hermanos Colon, and they [parents] have just influenced me my whole life, and told me to go for what I want. 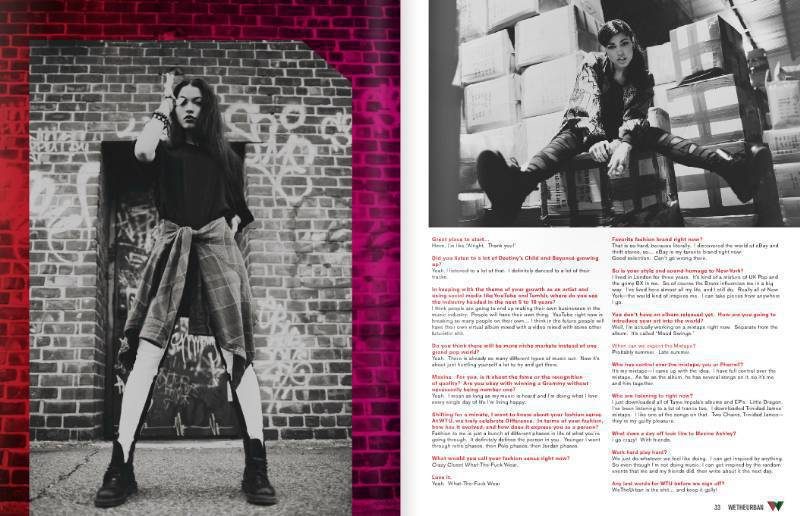 Do you ever steal moves from them and put it in your music?
Yeah, I was born with it. Got that in my blood. Of course

Tell us about comparisons, Maxine. How do you deal with comparisons, and wo do they usually link you to?
I think getting comparisons are cool. They’re good, cause if you remind them of someone big, that’s good. They say Beyoncé sometimes, like the little tricks, but that’s about it really.

Well that’s a high compliment.
That is. I’m like, “Forreal? Beyoncé? You sure about that?”

Great place to start…
Hmm, I’m like “Alright. Thank you!”

In keeping with the theme of your growth as an artist and using social media like YouTube and Tumbrls, where do you see the industry headd in the next 5 to 10 years?
I think people are going to end up making their own businesses in the music industry. People will have their own thing. YouTube right now is breaking so many people on their own… I think in the future people will have their own virtual album mixed with a video mixed with some other futuristic shit.

Do you think there will be more niche markets instead of one grand pop world?
Yeah. There is already so many different types of music out. How it’s about just hustling yourself a lot to try and get there.

Maxine. For you, is it about the fame or the recognition of quality? Are you okay with winning a Grammy without necessarily being number one?
Yeah. I mean as long as my music is heard and I’m doing what I love every single day of life I’m living happy.

Shifting for a minute. I want to know about your fashion sense. At WTU, we truly celebrate Difference, In terms of your fashion, how has it evolved, and how does it express you as a person?
Fashion to me is just a bunch of different phases in life of what you’re going through. It definitely defines the person in you. Younger I went through retro phases, then Polo phases, then Jordan phases.

What would you call your fashion sense right now?
Crazy Closet What-The-Fuck Wear.

So is your style and sound homage to New York?
I lived in London for three years. It’s kind of a mixture of UK Pop and the grimy BX in me. So of course the Bronx influences me in a big way. I’ve lived here almost all my life, and I still do. Really all of New York-the world kind of inspires me. I can take pieces from anywhere I go.

You don’t have an album released yet. How are you going yo introduce your art into the world?
Well, I’m actually working on a mixtape right now. Separate from the album. It’s called “Mood Swings.”

When can we expect the Mixtape?
Probably summer. Late summer.

What does a day off look like to Maxine Ashley?
I go crazy! With friends.

Any last words for WTU before we sign off?
WeTheUrban is the shit… and keep it guilty!