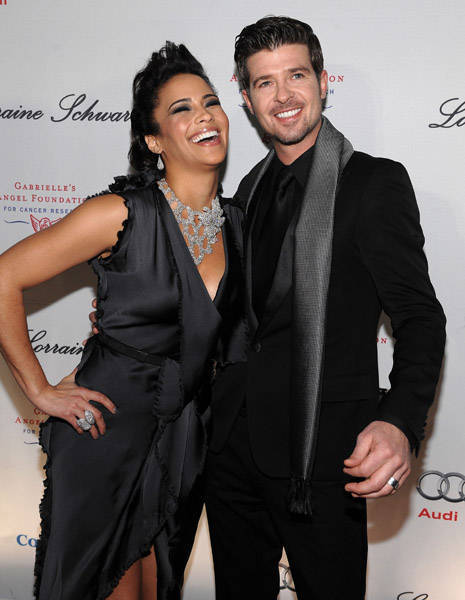 YouTube took down the Unrated Version of #BLURREDLINES because it was too hot! You can still view it here! Robin Thicke didn’t plan on releasing the unrated version of his music video for the song “Blurred Lines,” which features nude models prowling around him and rappers Pharrell and T.I. Then his friends and actress-wife Paula Patton weighed in. “When I first got both videos, I liked them both, but I thought the first one is so good maybe we’ll just release that and not release the second one. And then I started playing it for my friends and my lady, and everybody just thought it was great,” he said in an interview Thursday. “It’s entertainment.”

Thicke’s unrated video hit the Web on Tuesday and so far it had more than 1 million views on YouTube. The original kid- and teen-friendly version debuted last week and has close to 800,000 views. The 36-year-old singer said director Diane Martel came up with the idea of using nude models. “As long as it’s fun and the girls are comfortable, let’s do something silly,” Thicke said. “Let’s take some chances.” Thicke said his wife was OK with the models on the set and he sought her approval: “Obviously if she didn’t like it, wouldn’t put it out.” “Blurred Lines” will appear on Thicke’s Sixth Album, due out this summer. He said because of his upcoming album, he won’t appear on the second season of BET’s “Real Husbands Of Hollywood,” which also stars comedian-actor Kevin Hart. The hit show recently wrapped its first season.

“We tried to work it out. I really love the show and love being on the show and it just turned out the time they needed to shoot I was finishing the album,” said Thicke, who added that he’s written and will direct a short film. “It was just too much going on to come back.” The Grammy winner’s new album will feature producers such as Will.I.Am and The Cataracs, and Thicke said he’s also reached out to 2 Chainz, Kendrick Lamar and A$AP Rocky to guest feature. Thicke, whose sound is based in R&B, is known for his bedroom grooves and his No. 1 hits like “Lost Without U” and “Sex Therapy.” Justin Timberlake has recently drawn comparisons to the crooner because of his new album, “The 20/20 Experience,” which meshes R&B, soul and pop sounds. “Well, you know, I’m pretty swagged out,” Thicke said with a laugh. “I haven’t heard the album, but I heard the first single. It’s a nice groove. I like it.”