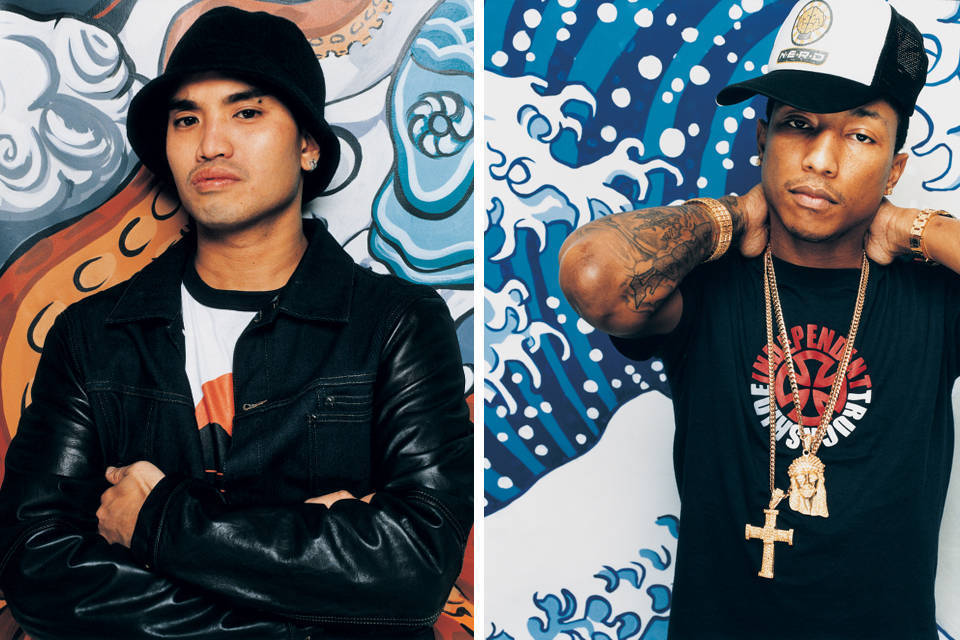 By Eddie Brannan, Photography: Jonathan Mannion. April 2013: Over the weekend, Pharrell Williams turned 40, celebrating with an airbrushed sheet cake in the shape of a fashion-forward black Stewie. Below, in honor of Williams’ seemingly eternal youth, read FADER’s 2002 cover story on Williams’ production duo The Neptunes and not-rap group N*E*R*D, written upon the release of N*E*R*D’s In Search Of….

Spring 2002: “Let us start,” as Fela Kuti said, “what we have come into the room to do.” And I guess that means we better get this Neptunes show on the road by reviewing the facts. FADER editor Eric Ducker summarizes it well. “Most thugs and models (and thug models) listen to the same shit. And a lot of it is produced by The Neptunes,” he writes me. “The Neptunes are the acknowledgement that hip-hop is pose. They say, ‘These days anybody can be hip-hop stars, even us.’” But that’s deep, because if hip-hop has reached the point of ironic sef-referencing, if it has acquired the delicious mille-duille layering of meaning that has rendered every other subset of pop culture grist for the vulture’s mill, then that means one of the last diehard bastions of poker-faced earnestness has finally fallen by the wayside. 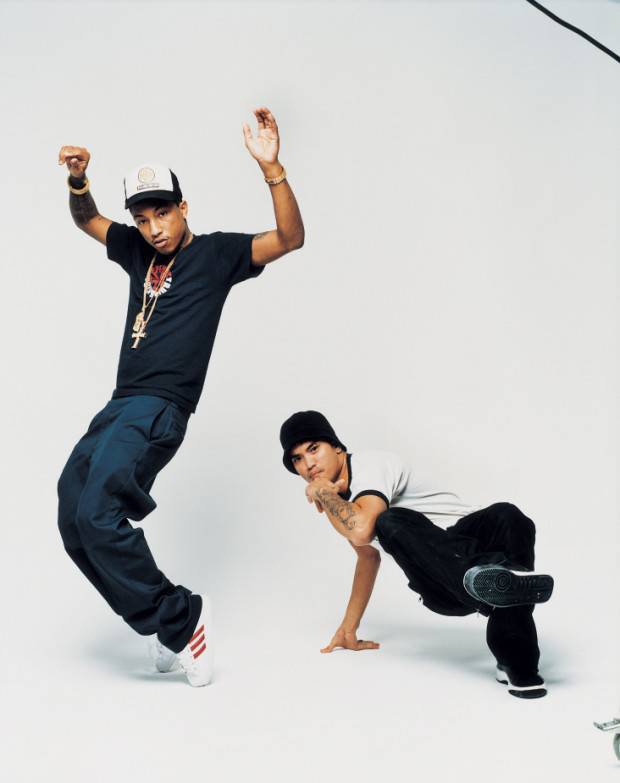 But is the world really ready for hip-hop with a smirk? Hip-hop has become throughly hung up on a very literal take on what type of behavior, demeanor, lifestyle etc. is appropriate for its ambassadors. The thug aesthetic totally dominates mainstream hip-hop now, to the extent that if you don’t subscribe to it and act like you mean it, you’re pushed to the periphery, So the stylistic breadth of hip-hop has narrowed drastically, imposing restrictions on those who wish to remain in the game, which means Redman (now 32) probably feels the same way about the 15 year-old act he has to trot out album after album as Richard Pryor eventually did about Mudbone.

But the kids expect it, so he does it, and Jay-Z does Jay-Z, and Nas does Nas, and you better believe they all do it straight-faced. But when watching Rap City requires as much suspension of disbelief as you need to sit through one of those fraudulent Phillip Morris commercials about how they give a minuscule fraction of the money they make from poisoning people to charity, and irks you equally, then you realize that it’s not just you, the world really has changed, and that maybe this hip-hop stuff is just a young man’s game.

After all, by and large you quit playing cops and robbers and cowboys and indians when you were, what, 12? Younger? So why would you want to listen to some other asshole’s drug-dealers-and-feds eyelid movies, especially when for the most part they lack the rudimentary wit to acknowledge that this is mostly throwaway stuff, schlock essentially.

Which brings up back to The Neptunes. The Neptunes have gone from being faceless up-and-coming producers (Kelis, Noreaga, Ol Dirty Bastard) to the more public duo who make club anthems (Jay-Z, Mystikal, Ludacris) to the current perception of them as the hottest production team who make millions doing remixes and songs for pop acts (Britney Spears, Backstreet Boys, P. Diddy) and aging hip-hop acts (Busta Rhymes, LL Cool J). And now there’s N*E*R*D, the producers-as-group outfit featuring Pharrell Williams, Chad Hugo and their Virginia Beach buddy Shae (Haley), with their debut In Search Of…

N*E*R*D is an outfit that doesn’t generate the standard myths about themselves, and so hopefully won’t fall into the predictable hip-hop trap of actually starting to believe them. In many ways they’re not really a hip-hop group at all. Not that they don’t talk about drugs and funs and all that good hip-hop shit thought: they certainly do, but when they do it feels like it comes with a knowing wink. “Bobby James,” a track on In Search Of…, tells the story of a 17-year-old loser who gets into drugs to forget about his life and ends up assed out. It’s not your typical rapper iconography, that’s for for sure. Indeed the idea that hip-hop can be anything more than stylized, braggadocio-fueled autobiography, or that “literary” devices, for want of a better term, like writing from another’s perspective might have a legitimate place in 21st century hip-hop, is a minority viewpoint.

Indeed it’s as though hip-hop, at least mainstream hip-hop, has been stripped of all of the diversity it once used to manifest, which certainly includes any faux-literary high art folderol like alternate perspectives and other superfluous, non-profitable stuff like that.

That is to say, pretty much everybody in hip-hop writes from another person’s perspective, but 99.9 percent of the time it’s nothing more than a rapper’s crappy alter ego that’s tougher, more misanthropic, less fearful and better armed than he or she actually is, and the reason everybody does it that way it because it has become industry standard, that schtick that the kids expect and the rappers deliver. And sure enough, there’s a couple tracks on the N*E*R*D album which you might be tempted to file under typical hip-hop parties and bullshit. “Things Are Getting Better,” “Brain” and “Provider” all seem to dwell on fairly conventional rap preoccupations; adoration from hoochies in the club, getting your dick sucked and drug trafficking.

And yet listen to the tracks themselves and you realize that N*E*R*D’s style is vastly different than the cocksure sneering manner that Jay-Z, say, would bring to the same subjects. This is in part due to the music, a fashionable melange of “psychedelic pop, classic rock and new wave,” as the n-e-r-d.com website describes it. (Know what they actually mean? It’s white music. There, I said it for them.) But it’s actually far more to do with the sensibilities of the people that make it. Or rather, the whole shebang reflects how fundamentally different The Neptunes/N*E*R*D are from many of their peers in hip-hop.

They’re middle class kids (who met in band, for chrissakes, and some inter-school special band program at that!) from respectable homes in the suburbs who grew up riding BMXs and probably had paper routes. They’re 27 and 28 and come across like 22 year olds, not immature so much as untainted by cynicism, not yet world-weary and blasé. They don’t talk about “the game” or “the streets.” Hugo is married with two kids and Williams bemoans the fact that he can’t find a nice girl to settle down with. Meantime he likes models, but not the thick-thighed fast-assed type of chick you see in rap videos. Nah, Williams likes real models. Clara Benjamin, Aicha, Margareth—tall, willow-slender dark-skinned girls. Williams is a guy with a finely-tuned set of aesthetics, as we all know, wearing Helmut Lang jeans, Rock God tour T-shirt and mesh caps when non one but Spring Street fashionistas were doing that (and now he’s over that and into shell toes and Dickies work pants).

Hugo is more restrained, sartorially, but there’s no indication that that implies any lesser creative flair. Nor the opposite, that he’s the brains to Williams’ more flamboyant frontman. No, it’s a duo, and Shae (Haley) makes three, a kind of Stand By Me club of boys who know each other because they’ve always known each other and haven’t yet grown up, gone into the real world and found they no longer have anything in common. This, really, is the essence of The Neptunes, and by extension of N*E*R*D Their alliance, their contentment with the suburban comfort of Virginia Beach, their transparency, is pubescent boyhood stretched to infinity, and N*E*R*D is a big summer vacation game of cowboys and indians, cops and robbers, beats and rhymes, bitches and blow jobs, and the great thing is, summer never ends and you never have to go back to school.

In other words maybe that whole irony thing is a ruse, that there’s really no complex layering of meaning here at all. Maybe there’s just my innate need to attribute complexity to those I find appealing, because I just feel the world is a better place if all the things I like in it are either brilliant or the products of brilliance. But could it actually be that the reverse is true? Is it possible that Nas is the master ironist, that Jay-Z’s laconic sneer and DMX’s gruff inanity are the products of the real master zeitgeist-surfers, the adeptest subtext-manipulators of our time, whilst The Neptunes are actually aw-shucks kids into Steely Dan, Thule racks on old-school Benzes, who won’t eat the meatloaf if there’s onion in it, who say “these days anybody can be hip-hop stars, even us.” And actually mean it! Whew! Is that what the New America ultimately means? Eternal suburban teenage-hood? A clue, for what it’s worth: when I went to Virginia Beach to hang out with The Neptunes for lunch we me in one of the smartest restaurants for miles around. It was in a mall.