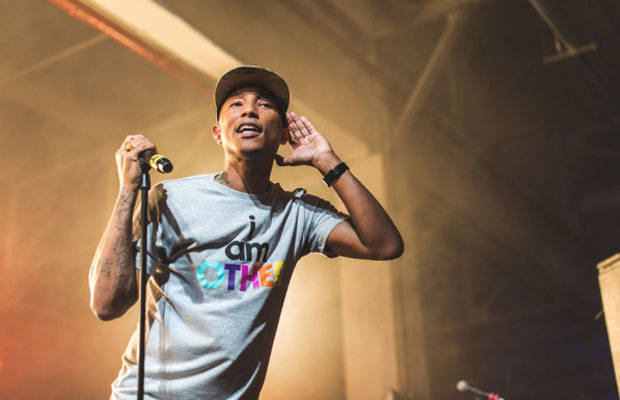 As the reviews for Daft Punk’s Random Access Memories (out on Columbia Records, May 21) start pouring out web-wide like bees from a busted hive, VIBE ‘got lucky’ with Pharrell Williams. The singer-rapper is a key cohort alongside The Robots in their forthcoming magnum opus, who poignantly discusses the meaning of Daft Punk’s music in the roll-out series, The Collaborators. “It represents freedom for all people,” said Williams. But does “it” include today’s American umbrella genre, ‘EDM‘? “There’s definitely some good EDM DJs and producers out there, but its just one night,” Williams tells VIBE, referring to the hyperactive pace of new EDM wannabes and fakes.

“I think for them [Daft Punk] and for me it just became too corporate. When the corporations get involved, they tend to have you go so commercial that you sort of lost what got you there in the first place.” The Daft Punk/Pharrell alliance first saw life when they, along with Lenny Kravitz and D’Angelo were all signed to Virgin. “That was like a different day,” Pharrell waxes poetic, adding, “the most eclectic, incredible label ran by Nancy and Ken Berry had this president, Ashley Newton. I just think it’s so curiously interesting that 10, 15 years later, Ashley is over at Columbia and he signed Daft Punk.” Those were the days – as the adage goes and as Pharrell explains it, “When we were in that creative world.”

Diversity of the sounds were accepted and celebrated in the space he’s describing. “The Gorillaz were there too, Williams adds. “I met them at a time when our record company was like a frat house. Everyone celebrated their differences, the differences were the things that made them rare and gave them their value and it was just awesome.” However, instead playing beer pong, this frat was thirsting for a different kind of carousing. “It was like going to the school of Xavier from X-Men,” he muses. “But those kids realized they had superpowers. They just didn’t know how to use them and thought they were weird because they were mutants amongst the rest of the kids. That’s how I felt when I got there.”

From those early days to now, Williams admits the journey has “been crazy.” When Daft Punk arrived from France to the States with their crossover album Homework, “there was a [dance music] scene, but it wasn’t what their music made it be [what it is today]. All of a sudden you just hear the rest of the world copying their sounds and variations of their inspiration that they left for people over the last 10 years.” Pharrell Williams needs to create, organically, as does Daft Punk, even if they are robots. EDM fads have nothing to do with their mission. “It’s like when the corporations try to cash in on it [EDM], they kill it a little bit, and these guys [Daft Punk] are like ‘man we need to continue to do what we’ve always done, which is invent.’” And now, mutants, enjoy the dance music with over 75 million views, “Get Lucky” AGAIN ONE MORE TIME…