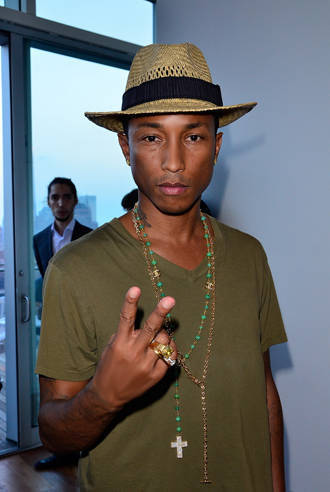 By Faran Krentcil. Pharrell Williams has collaborated with everyone from Daft Punk and Britney Spears to Louis Vuitton and the Japanese sneaker brand A Bathing Ape. Now the Renaissance man has teamed up with artist Daniel Arsham on pieces based on his first Casio keyboard. “I’ve been taking items of technology that all of us know and have used at a certain moment, like pay phones or old cameras,” explained Arsham at The Standard East Village, which hosted his exhibit.

“But we’re remaking these things with materials that cause them to appear as if they’ve been found in the future—things like steel, crystal, and volcanic ash. It’s a little known fact that you can buy volcanic ash on eBay.” Alas, you can’t buy Pharrell on eBay—but you can read our interview with him, which covers everything from McDonald’s fries to universal duality. Daniel Arsham took the keyboard you used to teach yourself music, and he turned it into a relic from the future.

How did you feel when you first saw it?
It’s crazy. It’s like I’m watching I Am Legend. But I don’t know that a keyboard would erode in that way unless there was some sort of explosion in the future, like if things blow up and everyone turns to ashes.

Like Pompeii?
Worse. More severe. Like Sodom and Gomorrah style. And when you look at [Arsham]’s work and you realize everyone can take a different meaning from the same piece art, you realize it’s crazy how this guy’s mind thinks.

The Casio keyboard represents your first steps as a musician. But what would Daniel Arsham have made if he’d done an art piece based on your early fashion choices?
In 1987, it would be a terrible, terrible gold chain—really small and skinny and dainty. But that wasn’t the beginning of my style—I did not have style in ’87. In ’87, I was doing and following. You have the best style in the world when your style is your own style. I did not have a style back then, I was just then discovering A Tribe Called Quest, which led me to the understanding that I could be whatever I wanted to be, even if at a minimal level, it was just being different. That’s when I learned I could be different. And then my identity started to really come out, and then, right around 1990, I started having style.

So what was the first piece of clothing that you bought that you still stand by?
I would work all summer at McDonald’s, get fired because I never really had staying power to work a job because I was like, really lazy. And I wouldn’t really make enough money over the summer to buy anything I wanted to wear. Especially because they would give you half off for lunch, so you spend all your money there eating tons of food.

What? No free fries?
Free what? Hell no, nothing was free! And I kind of lifted a couple of nuggets here and there. I got fired for that—but I never considered it stealing because it’s not like I left the building with the nuggets, I just chucked a few in my mouth while I was there. But I would work all summer and still not have a lot of money. But I finally got enough money for a silver Ralph Lauren Polo jacket, and that was me.

Do you still have that jacket somewhere?
That’s a really good question. I don’t know where any of that stuff is. I just remember once I got that jacket, I never followed anybody again. I was just me.

How do you feel now that so many kids are now trying to be you and dress like you?
I don’t know that to be the case! That’s a very kind compliment, ma’am, but I’m just happy we’re living in an age where 14-year-olds get it. That’s the shit to me. It’s cool because kids now look up to themselves more than anything.

That’s a cool perspective. Most people complain about how social media is making everyone total narcissists.
Oh, there’s a bad side to everything, there’s always a good side and a bad side. But that’s the importance of duality in existence. You need positive as much as you need negative, you know? And that’s an interesting segue back into this artwork. There’s something very hopeful about it, and there’s something very scary about it, but it works either way, because if [Arsham] made it perfect, it wouldn’t be a big deal. But it’s the erosion, or the seemingly erosive element to his work that gives you a frame for the poetry he’s trying to say. Otherwise, you’re just like, “Oh, that’s the Casio keyboard.” And then you might as well be in my garage. Plus, it becomes a 3D experience when you realize it’s made from crystal and volcanic ash.

Did you know Daniel bought all the volcanic ash off of eBay?
No ma’am, I did not, but that’s wild! I’m gonna go search for it.

It’s kind of worrisome to be called “ma’am.” I feel like I’m an army general or something…
No, it’s not like that—I’m from the South! We call every woman “ma’am” as a sign of respect.