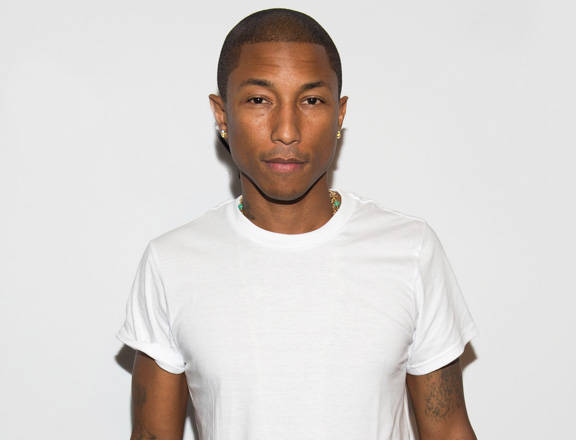 Miley Cyrus
“I want to be like him—I think everyone should want to be more like Pharrell. Someone who respects art and loves art in every form. He’s always got crazy artists coming into the studio, cool chicks from Japan that are just drawing this amazing artwork, and just—everything he does I’m just inspired by. It’s a great energy to be around. I wanted to get with him first, ’cause I wanted to be free. I don’t want to have any labels. Pharrell helped me on that soul search—he suited me up in my armor to be strong and to go against what everyone thinks you should do and be free. He prepared me for the battle you have to fight to be different. He was like, ‘I love you, you’re my sister. I’ll fight for you, I’ll do anything’—that was the moment where I just knew: Me and Pharrell, this is, like, a forever thing. We’re going to continue to make music together, as long as both of us are making music.”

Daft Punk’s Thomas Bangalter
“Pharrell’s an extraordinary, multitalented artist—songwriter, singer, rapper, producer. He’s a great collaborator, because he has a deep knowledge of all these different roles and what it takes to make a great song. As a singer, he’ll know how to interact with a producer, and likewise, as a producer, he’ll know how to interact and work with singers. He was always really the only choice in our mind for ‘Get Lucky.’ We’ve known him for a long time, and we’ve always considered him as this genuine, timeless entertainer, glamorous and elegant. It’s precisely this timeless elegance that we ultimately wanted to capture on the record. We were totally in sync—we were just on the same wavelength all along the ride.”

Takashi Murakami
“I envy him, honestly. He is a true genius—he has a great personality matched with Picasso-like creativity. He had the idea of creating jewelry as an art piece, and he approached me about building a cabinet to display the jewelry. I became interested in the context he was aiming for—the idea of creating a symbol of society’s out-of-control desires—and so I added my own context by turning the cabinet into a monster. He liked that, and things took off from there. I think Pharrell is in a class of his own in bringing out the best in his collaborators. He has a wide range of tastes and is well versed in all of them, but he never flaunts this as he pulls from those he works with. A wonderful creator.”

Hans Zimmer
“It’s the experimentation part that I love about him. I was supposed to help Pharrell on Despicable Me, and all I tried to do was stay out of the way of the onslaught of creativity that was coming from him. And then we started talking about technology, and we started a company called UJAM that’s developed interesting musical applications. We listen to each other. It’s a well-balanced relationship because, at the beginning of the conversation, we both know what we’re talking about, then we get to the middle of the conversation and we’re now on thin ice, talking about experimenting with something that neither of us knows about. We normally both have an endless supply of imagination. Organized chaos—we thrive on it. Because it’s Pharrell, you don’t just limit him to music. There’s the fashion thing, the art thing—there’s all these other things. All these polymorphic qualities make it really interesting. That’s why I love Pharrell, because, yes, we will touch on music, but then I’ve heard him talk on human rights, I’ve heard him talk on artists and their role in the world. Everything is informed by everything else, and that’s why his music’s good.”

Robin Thicke
“He does his own drums, his own chords, all the arrangements—and he’s a master songwriter. I can always say, ‘I like this better than that,’ but I try to give him space. Then once he has a couple of great lines, I jump in with a couple and give him time to think of his next couple—we go back and forth. The songs we’ve kept pretty much happen in about an hour and a half. The first two days, we did songs that were a bit more R&B-flavored, and then the third day we did ‘Blurred Lines.’ It seemed like something that never really existed before. We had Earl Sweatshirt with the Odd Future crew over in one studio, Miley Cyrus finishing up her Pharrell song in the other studio, and he and I were there, and by the end of the night, everyone was dancing and partying together to that song. I thought ‘Blurred Lines’ could be a hit, yes, but you never can expect this type of success. You think I’m going to do an album without that guy ever again?”