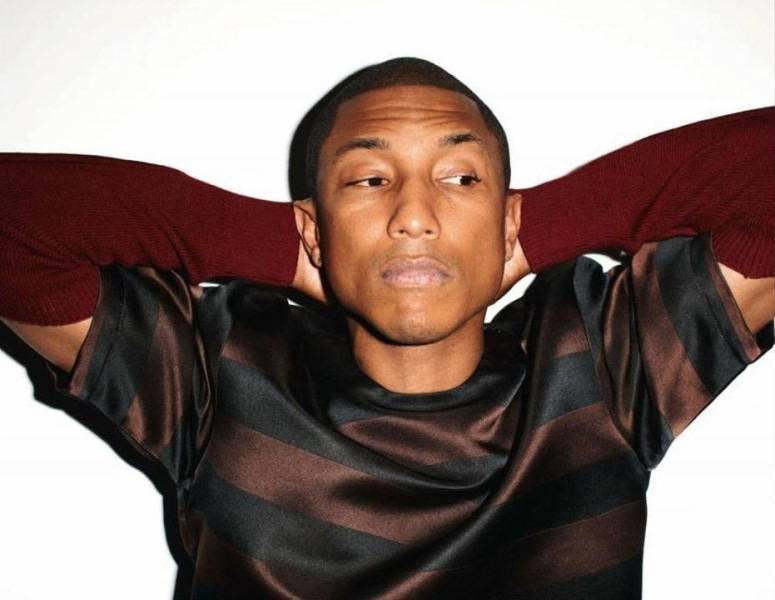 By Maggie Wrobel. If only boring people get bored, it’s safe to say that Pharrell Williams doesn’t know the meaning of either adjective. Democratic in his many creative pursuits, the producer/singer/designer has collaborated with the likes of Louis Vuitton and Takashi Murakami and, in the studio, has added his Midas touch to records by virtually every boldfaced pop act of the past 20 years. After lending his talents to the summer’s two biggest songs (Robin Thicke’s Blurred Lines and Daft Punk’s Get Lucky), the impossibly fresh-faced 40-year-old shows no signs of slowing down.

His acclaimed streetwear line, Billionaire Boys Club, just turned 10; Williams is marking the occasion with a pop-up shop at Holt Renfrew Yorkdale in Toronto, where he will also be making a personal appearance on Sept. 21. Williams spoke to Globe Style about making hits, looking fresh and why Canada is far from dull.

It seems like you had a pretty great summer. What was the best part?
As a songwriter you just remain super-humbled by people connecting to the songs, by people singing your records like that. I’ve seen so many different renditions and so many covers. I’m just in awe of the human response. I’m really thankful – it’s been a great summer.

The BBC shop at Holts is a pop-up, which is a retail concept that doesn’t seem to be going away any time soon. Do you like to shop? What’s that process like for you?
It’s actually not a huge process – it’s very simple. I love Commes des Garçons. I love Chanel. I love Lanvin. And I love Céline, even though they only make girls’ stuff, but I still find things of theirs that I can wear, like sunglasses and [sneakers]. I love what I love. I think Phoebe Philo is a genius.

Your line turns 10 this year. Did you foresee it lasting this long?
I did not, I did not! Trust me, we’ve had our trials and tribulations, but the fact that we’ve endured and persevered is really awesome. They’re the same, in a way, the fashion and the music. These things are supported by human taste and tone, and it’s something you have to remain open and thankful for, because, you know, it doesn’t have to be that way.

You’ll be coming to Toronto soon. What’s your impression of Canada?
Well, there’s the uncontainable talent that’s basically pouring across the border into our country. There’s an incredible and extensive jazz history, an incredible West Indian culture and West Indian music that comes from there. I take my hat off; there’s a lot of talent there. Canada is not dry, baby.

Any Canadians on your radar right now that we should be paying attention to?
There’s this kid, Francesco Yates [a Toronto singer-songwriter signed to Atlantic Records]. He’s 17 years old, and he’s absolutely gonna be just a huge, huge, huge pop star, but not in the way people have been thinking of pop music in the past 10 years. He plays guitar and has one of the most incredible vocal ranges ever. He’s definitely a pop-chart threat.

You have so many creative outlets. Can you ever imagine running out of ideas – or out of steam?
When I was younger, someone told me about a mental block that they were having and they said, ‘Man, I don’t know what to write about.’ And I said, ‘I think you just figured out what you should be writing about. Just write about your mental block. And once you do that, your mind will go somewhere else.’ You can’t write the same song twice. So write about that mental block. And it definitely got the person past that spot. As long as you have loyalty and curiosity, there’s always something to jot down and talk about. The Pharrell x Holt Renfrew pop-up shop will be at Holt Renfrew Yorkdale until Oct. 23.