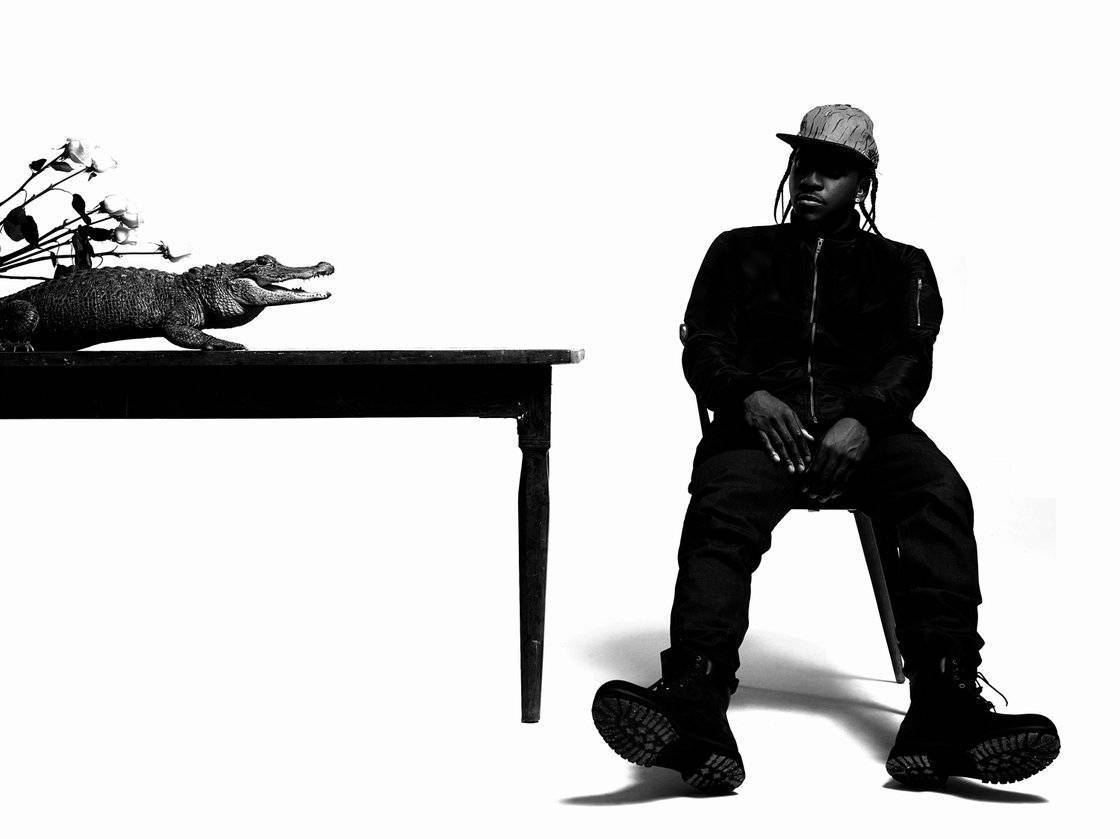 Pusha T. sat down with NPR.org to talk about his new album ‘My Name Is my Name’, where he talked about growing up with Pharrell.

Pusha Talks About His Beginngs As A Rapper, Meeting With Teddy Riley
KELLEY: Did you want to be Teddy Riley?
PUSHA: I just wanted to be his friend. His friends had MPVs, I wanted a MPV! Purple ones, with TVs! I tell everybody, I wasn’t rapping at all. I wasn’t rapping at all. My brother was a rapper. He was known for rapping, around the area. His DJ and producer was , at the time. And this is middle school, 8th, 9th grade. So, I’m in 4th grade. As he gets older and Tim starts branching out — I think he went to work with , that whole camp — me and my homegirl, my childhood friend, she introduces me to Pharrell. Pharrell likes her. I’m not rapping at all. Me and Pharrell just start hanging out. He likes her and starts hanging out with her best friend.

KELLEY: That makes sense.
PUSHA: You know what I’m saying? Then weeks later, he says, “Yo, wait a minute.Your brother’s Gene? Rapping Gene from the Beach?” And I was like, “Yeah.” And he’s like, “Yo, you gotta get him to come to the studio!” And I’m like, “Nah, man. My brother, he works with dude.” And he’s like, “No, but I know, you just gotta get him to come!” And this is all over a course of years, but I still wasn’t rapping. Always around it, though. So then when I did hook them up and they got in the studio, that was just the everyday occurrence. I was like, “Man, I’mma write me a verse. Watch.” And it happened just like that.

Pusha Talks About The Tune S.N.I.T.C.H.
PUSHA: Wow, you said a higher note. I think I would have to say that my favorite record on the album is called “S.N.I.T.C.H.”
KELLEY: The Pharrell joint.
PUSHA: The acronym “S.N.I.T.C.H.” Which stands for, “Sorry, N-word, I’m Tryna Come Home.” It’s the truest story on the album. Essentially, I got a phone call from a friend of mine in jail telling me that it would be our last time speaking because he made the decision to cooperate with the police. And he couldn’t take being in jail and doing time anymore, you know? “I’m just telling you we not gon’ speak because I know how you feel and I can’t do it no more.” So, there goes your higher note.
KELLEY: But that’s how you end the album, right?
PUSHA: Right.
KELLEY: That was your move. It’s a big move.
PUSHA: Yeah. I got the call and I actually called Pharrell and I was like, “Listen. Tell me am I analyzing this right.” And I told him the conversation, and he was like, “Yeah, that’s his gift. That’s his gift to you, but it’s a song.” And I said, “No, that’s a terrible song.” He was like, “No. It may be a terrible song, but it’s a true song and you know what happens when you write those type of records. It’s gon’ be that pain, it’s gon’ be amazing.”
So, he was like, “Well, listen. Just think about it.” And at the time I was asking him, I said, “Listen. The only thing I’m missing on my album is a ” or a ” type of beat.

KELLEY: Damn.
PUSHA: So he was like, “I’mma just work on the beat and you just think about it, because you need one of those stories anyway, from what you told me.” I said, “OK.”
He calls me two weeks later and I’m at SXSW on the street. He was like, “Sorry, N-word, I’m Tryna Come Home.” I was like, “What you mean?” He was like, “No, that’s the title of it.” I was like, “OK, OK. I like it, I like it.” He was like, “Nah, you don’t feel me.” He said, “It’s the acronym for ‘snitch’, man.” I was like, “Oh, yeah. You the G.O.A.T. You are the G.O.A.T.” He was like, “Am I the G.O.A.T.?” “You are the G.O.A.T.! You the G.O.A.T.!”
It’s my favorite record. My favorite record. The story records aren’t usually my favorite records, but this was one of them. It really hit home. I’ve been saying to people, I don’t necessarily want to hear rap anymore that doesn’t give me — if we’re talking about the streets — we can’t just glorify it. We have to tell the whole story.
And I’m saying I can’t listen to raps that don’t acknowledge that cooperating and informants are — like your crew that you’ve told me so many jewels and diamonds and Ferraris and so on and so forth about, nobody went to jail and nobody cooperated? I can’t listen to that anymore. It hits home too much.
So, the third verse of it, I was talking to everybody. All rappers, all boys who be out here, you know, everybody glorifies the lifestyle. And it’s like, everybody glorifies it, but nobody has ever put themselves that close to their man, or admitting, my man who can call me, and to tell me he’s never gonna call me again, and I gotta do what I gotta do and that’s just it.