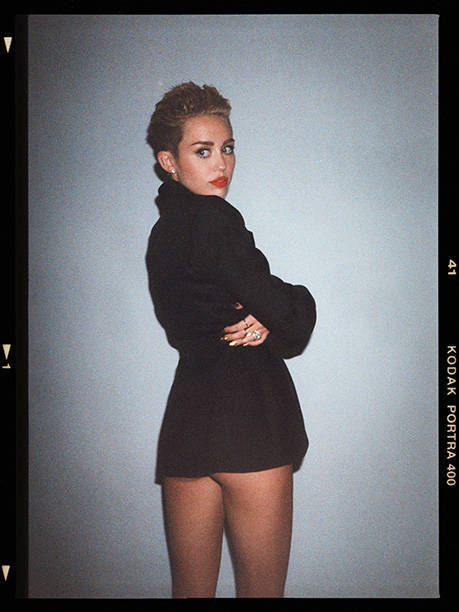 By Kyle Anderson. Miley Cyrus had quite a year. As she told Entertainment Weekly, she planned on 2013 being the best year of her life, and she certainly lived up to that lofty goal. Cyrus is one of EW’s Entertainers of the Year, and when asked who she would pass that honor on to, she agreed with one of EW’s picks. “I really think Pharrell [Williams] is the entertainer of the year,” Cyrus told EW. “Not only for what he did on my record but for what he did in the music industry in general with ‘Blurred Lines’ and Daft Punk.” Indeed, Williams contributed “#GETITRIGHT” to Cyrus’ album Bangerz and provided lots of guidance for her sonic reinvention.

In Williams, Cyrus found a kindred spirit. ”He and I were kind of on the same path, and I think that’s why he and I connected,” she said. “He really feels like a brother—it’s more than just us working together. No one had heard from me or him in a minute, and we were just kind of brewing up what we wanted to do next and what we wanted to drop on people. He and I were on kind of a journey together, and I couldn’t be more happy for him and what he accomplished this year in everything—in fashion, in art, everything he does. There’s not a better person I would wish that on. He’s the best person I’ve ever gotten to watch and learn from.

I’ve grown up in this industry, and I’ve watched a lot of people, and I think that’s where I learned most of what I know. He’s one of the greatest mentors I’ve ever had, and who he is as a person is equally as amazing as who he is as an entertainer.” It’s a mutual admiration society between Williams and Cyrus. Back in January, Williams talked up Bangerz to EW long before the release of the single “We Can’t Stop.” ”Miley Cyrus is gonna be amazing,” he told EW. “I’ll tell you what right now: She is a force, and no one knows it, and I’m so happy for her. This is a girl who has been fighting for a very long time and loyal to the brand that gave her her start.

But she had to break out of not only that realm but also the glass image that she felt everybody was keeping her encased in. She’s going from beautiful caterpillar to giant butterfly with vigor. She’s really that. Her vocal ability is far beyond what anyone thinks. She is very knowledgeable—she can quote the last Wacka Flocka song, and she can tell you when Dolly Parton released ‘Jolene.’ She is nothing short of a phenomenon. To see her go is amazing to watch. She’s not afraid of anything.” Cyrus certainly proved him right.