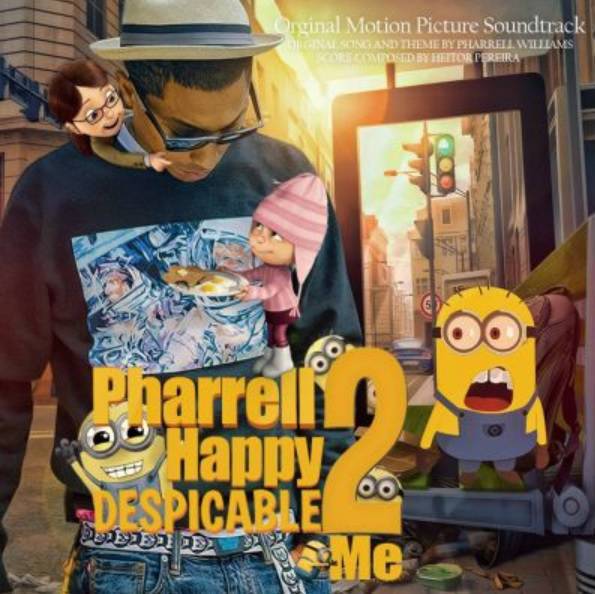 By Michael Ordona. Pharrell Williams hopes his ‘Despicable Me 2′ song ‘Happy‘ will remind listeners that, no matter the day’s headlines, ‘There are lots of reasons to smile.’ “I think I started with drums,” says Pharrell Williams. He launches into the strong, clean, distinctive beat to the “Despicable Me 2” song “Happy” with his hands slapping his lap, then vocally adds more and more percussion sounds: “You know what I mean?”

Even without instruments, singing the word “music” for the rave-up organ line and tapping on his body in this nearly empty meeting room at the Four Seasons, he brings out the song’s giddy dance-party feel: “‘It might seem crazy, what I’m ’bout to say … music, music, music, music,” he sings in a ‘60s croon somewhere between Curtis Mayfield and Jackie Wilson, “Sunshine, she’s here, you can take a break … music, music, music, music ….’ “So that led the whole feeling for the track. But when I got to the bridge, I knew I wanted to sing something that would take me to another land: ‘Because I’m happy-y-y-y-y….’ You know, I wanted those good-feeling chords on the organ.”

Dapper in layered semi-casual couture (he was once named the Best-Dressed Man In The World by Esquire), the youthful-looking 40-year-old has retained his Southern manners (“Yes sir,” he says) despite two decades in the business. The writer-producer-performer had two multi-platinum smashes this summer, simultaneously holding the No. 1 and 2 spots on Billboard’s Hot 100 with his collaborations with Robin Thicke (“Blurred Lines”) and Daft Punk (“Get Lucky”). Meanwhile, Williams followed his contributions to the first “Despicable Me” animated film with more music for this year’s sequel, including the irresistible R&B workout, “Happy.”

“The criteria that they’re giving you isn’t just words or some one-sheet description,” he says of writing to someone else’s specifications rather than just following his own groove. “You get to see the animation, you get the feeling, you hear the voices. That almost writes the music for you, in a sense.” He was, yes, happy to work with the filmmakers again but was surprised by the story’s setup. “They said, ‘Gru’s gonna be happy.’ ‘What?!’ Gru was so evil, they almost called the first movie ‘Evil Me.’ When you think about this dastardly character … and they said, ‘We want something to feel happy.’ ‘…OK.'”

He says his goal was to “put out a Hallmark card to the airwaves, out in the ether, essentially to humanity. When you’re dealing with 7 billion people, there’s bound to be something terrible happening every day,” he says, rattling off some awful current headlines. “I wanted to send a reminder: There are lots of reasons to smile. You can be resilient with your smile. Why is it so cool to be mad all the time? Some songs, everybody’s so upset.”

The song’s accompanying video is a “lyric version” with the film’s minions making mischief around the song’s words in bold fonts. Much more ambitious though is a website launched for the song, 24hoursofhappy.com, that is just what its name promises. “It’s the first 24-hour video. It’s crazy,” Williams says. “It’s linked to the atomic clock. The song is being played on repeat for 24 hours straight. Each take starting every hour is me. So I did 24 four-minute takes of ‘Happy.’ From 1:00-1:04, I perform ‘Happy.’ Then at 1:04, the next person does it. We picked all kinds of people, all types. Every hour is 15 takes.”

That’s 336 people performing the song, in addition to Williams‘ 24 versions. “Crazy,” he says, beaming. “Everybody from a bride to a plus-sized dude, dancers, people who cannot dance for anything; actual directors were in it, Magic Johnson, Jimmy Kimmel. We wanted all humanity in there, not just the model-types you might expect.”