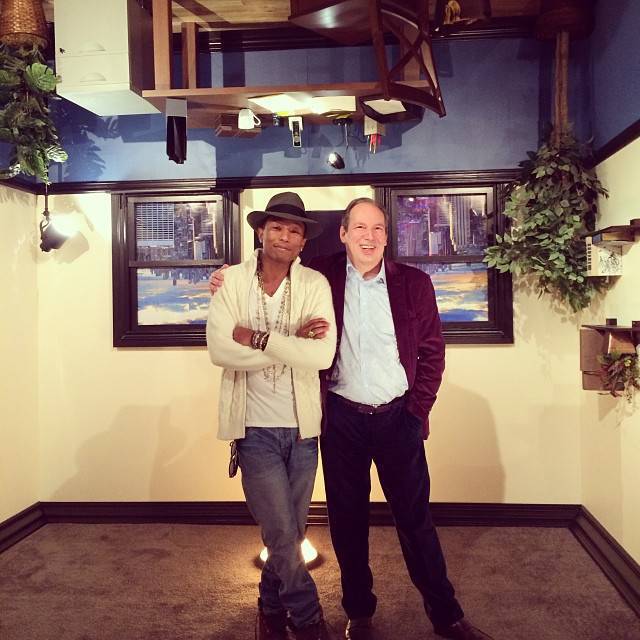 And right now he looks great as always, wearing his big black Vivienne Westwood ranger hat, but he’s still jet-lagged from a trans-Pacific flight: His eyes droop, shoulders bend and his energy is sapped. “I feel like I’m being interviewed by the KGB,” Williams tells Rolling Stone, sitting with Zimmer at the Standard Hotel in downtown Los Angeles to talk about their new soundtrack project.

“I’m just telling people everyone’s secrets right now.” “Ask him anything,” Zimmer says with a smile. “This could be good.” Williams and Zimmer, the Oscar-winning composer behind The Lion King and The Dark Knight, have been friends for years, and together they created both a half-album of unreleased songs and the music for the 2012 Academy Awards.

When film director Marc Webb approached Zimmer about music for the aforementioned superhero sequel, the composer decided to try a new approach with a crowd of collaborators that includes Williams, Johnny Marr (The Smiths), Michael Einziger (Incubus) and Dave Stewart (Eurythmics). The movie will be released on May 2nd.

“In the nineties, they used to have these ‘Songs inspired by’ albums, which were horrible – all the songs that nobody wanted in the movie,” says Zimmer. “Why don’t we go the other way around? We’ll start writing some songs, and the melodies of those songs become the theme for the movie. In a funny way, that was the language that a 20-year-old would express himself in.”

It was important for Zimmer to acknowledge within the music the youth of the main character, he says. “I seem to have some experience with superheroes,” Zimmer explains. “But I think Peter Parker of Spider-Man is different. He’s young. He’s just graduating college. I don’t think that he expresses emotion the way Batman would express emotion.”

One of the songs created was “It’s On Again,” which includes Keys and Kendrick Lamar, who would pop in on that video shoot later in the day. “I had an idea, and he lifted it to new heights,” Williams says of working with Zimmer. “I had a little dirt-hill idea and he’s turned it into a mountain. Alicia is singing and she did some co-writing on it too, and with Kendrick, it just feels like we might have our own little Mt. Rushmore here.”

Former Smiths guitarist Marr, meanwhile, excitedly joined the project over a long lunch with Zimmer in London. The result could be called a supergroup, but Zimmer had another label in mind: garage band. “Remember what it was like being in your first band,” Zimmer told his collaborators. “We can all get back there. As soon as we put a microphone there, there’s a purity that happens.”

The project began with a midnight screening of a rough cut of the film. “We were this pressure cooker,” Zimmer says. “Having all this talent in the room, there were ideas flying around all the time. They weren’t just about music. They were about story, they were about all sorts of things.” “The air began to sing,” Williams remembers of the sessions. “When the actors and actresses were not speaking, we got to actually tell some of the story. We were able to verbalize facial gestures.”

Williams calls the busy film composer “a mentor.” “He’s a big brother. There’s actually an educational side to our friendship.” Williams adds, “Before, I was basically getting my jollies from aesthetic, shallow pleasures because it was all surface. When I understood the importance of purpose and the gravitas in intention, that’s when my music started to become as close to magic as it could be. When you dig into his scores, they’re magical.”