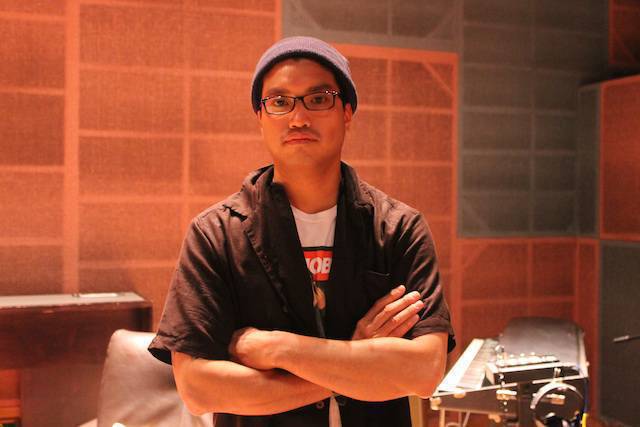 By Daniel Kohn. Inside a cavernous space at the Record Plant Recording studio in Hollywood, Chad Hugo is taking jump shots on an above-regulation-size hoop. He’s missing every one, but he couldn’t appear more relaxed. He takes off his button-down shirt, tie, and beanie to reveal a Tupac shirt. I tell him that today is the 18th anniversary of the rap icon’s death. 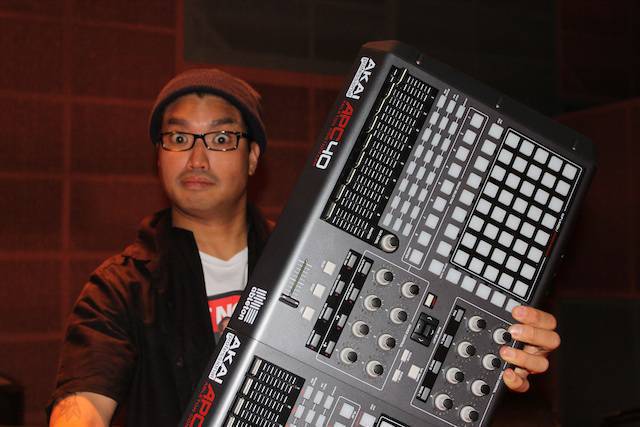 Hugo raises an eyebrow, takes his phone out, and corroborates by way of Google. He shakes his head in disbelief, not so much at the anniversary itself, but that he was so absentminded in the first place. “I grabbed the first shirt I saw this morning,” he says quietly. “I guess we can thank Urban Outfitters for that.” Behind the room’s glass window sits a mixing board. 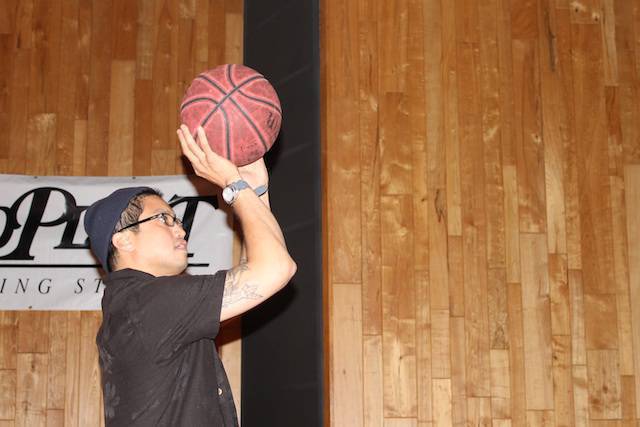 Behind that, The Wrestlers, an electronic duo from Houston whose upcoming project Hugo is executive producing, are banging club beats. Between baskets, Hugo hears the music. He glances up at the ceiling, nodding along, and sinks his first basket. “It took ten shots, but I’m glad it finally went in,” he says, flashing a smirk. The producer points beyond the wall and says, 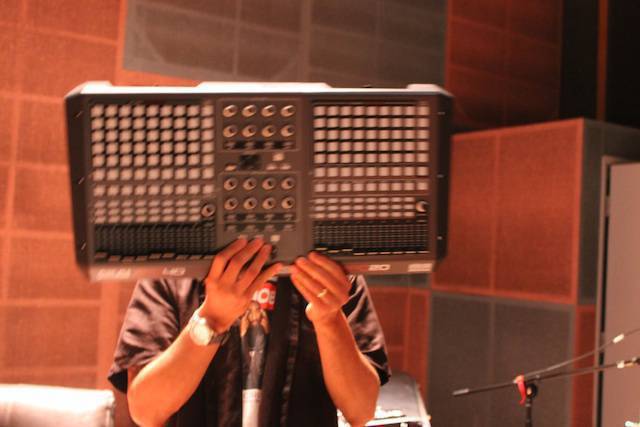 “The summer of 2001, man, we had so much going in here. We had Snoop in this room that’s no longer a room, Nelly in another, and I can’t remember who the other one was. But it was non-stop.” Hugo’s familiarity with the famed studio goes back over a decade. It is the site of many of his and longtime production partner Pharrell Williams’ greatest hits. This place is one of the main reasons he leaves the comfort of his Virginia home, where he resides with his family, to head westward.

While Pharrell Williams has served as the face for both The Neptunes and their kitchen-sink funk-rock project N*E*R*D Hugo has remained largely behind the scenes. In recent years, Pharrell’s star has risen through collaboration with stars such Daft Punk, Gwen Stefani, Robin Thicke, and Alicia Keys as well as his own hit singles (“Happy,” anyone?); meanwhile, Hugo has contented himself working with less established talents such as Kenna, Earl Sweatshirt, The Internet, and the Malaysian singer/songwriter Yuna, as well as scoring Manny, a documentary about the famed boxer Manny Pacquiao.

As an extension of his preference for remaining behind the scene, Hugo rarely speaks publicly. As we talk for about 30 minutes after shooting hoops, Hugo’s comments range from evasive to elusive. But that’s not because of a lack of respect or attention; instead, it’s because he has so many different things going through his mind that he’ll say whatever pops in his head, relevant or not. He perks up when we talk about his family. One of Hugo’s biggest thrills came when his oldest saw a N*E*R*D show in Virginia earlier this year.

Hugo remains is a student of music, and his Chad Hugo Experience project is a work in progress, or as his manager Corey Smyth succinctly says, “Chad’s going to do what Chad wants to do.” After we spend about 45 minutes in the big room, Hugo says half-jokingly he should record my voice on a track for his Chad Hugo Experience. After I divulge that I was booted from my elementary school’s chorus, Hugo’s much needed chai tea from a nearby Starbucks arrives and provides a needed jolt. It also signifies that he needs to return to his session.

As The Wrestlers’ latest track blares from the pristine speakers, Hugo subtly nods his head up and down. As the beats get punchier, his enthusiasm grows. The same satisfying smirk that he flashed after nailing his first ten-footer is back after he hears a particular break in the middle of the song. Hugo slowly drifts from the mixing board to upper area on the wall, lurking in the background, which is just the way he likes it.

Noisey: What’s your involvement with The Wrestlers? Is it just supervising and handling the usual executive producer duties?
Chad Hugo: I’m here on-site if they need me. Today, I met Alesso and his crew, who are here working on some stuff. I remember seeing them in Manila and having a good time. These guys (The Wrestlers) are just on their grind. They represent Houston. It’s funny because people used to represent back in the day. Like, “We’re reppin’ Hollis, Queens,” and Missy Elliott from around my way would rep P-town (Portsmouth, VA). I was born at a naval hospital there, so I rep P-town. So, they’re reppin’ Tex-Mex, barbecue, Beyoncé, and Slim Thugga. And I’m down with that.

Between your work with Earl Sweatshirt, The Internet, and such, you’ve been staying busy. All sorts of stuff.
I’ve been DJing with my boy Daniel Biltmore from Baltimore as MSSLCMMND. Shout out to them. We put out some mixtapes and spinning some things. We went troubadour-style on everyone for a minute.

What about Pharrell? Do you guys still do stuff together?
Pharrell and I are friends, and I’m a fan of his music. We were actually onstage, at the NBA All-Star Game and in our hometown in Virginia Beach. We rocked a show for the local radio station. Mad people came out, you know, a lot of people in a lawn area cheering us on. So, that was a N.E.R.D. reunion performance. My daughter, who’s 14, was there doing a two-step, and I was worried about her. They’re fans of the music and know all the words.

It’s got to be crazy that your kids are as old as your biggest hits.
It is. It’s a changing world, and you can’t be suspended in time looking back. But, when you play a song, hopefully you make it a classic. Music is a time warp, it’s its own time machine. That movie Back to the Future, it was a DeLorean. Over here, it’s a MP3. Vinyl if you’re lucky.

What’s it like working with Biltmore versus doing stuff on your own?
I don’t know, it’s tough. Daniel is doing all sorts of gigs, and we tried to FaceTime with him now during the session, and he was at a pub during the day playing music, which is interesting and crazy to know that people want to see a DJ during the day. He’s DJing at a wedding and was going to use the “Imperial March” as the procession.

Do you enjoy DJing?
I do, but I hardly do it. We play a few records, and it’s fun. You can have an arsenal of stuff, and if it’s not being played, sometimes you can’t rely on everyone to play it. You gotta play it yourself, then hope and pray for the best. “My soul shall live because my mind never dies,” which is our own mantra that started out as we were playing on the East Coast. Then when we came out here, we took hikes, then we were DJs. That was kind of a ritual, going out to Runyon Canyon and seeing nature, then coming back home and listening to music. It was a new, rediscovered essence that you don’t get to do where we’re from.

Tell me about working on Manny.
I was pretty psyched up to score that movie. I had the chance to work out with Manny. I couldn’t keep up with his runs. When ran up hills, I’d be trailing behind huffing and puffing. I did some crazy pushups and situps. That was what I experienced. We got to travel with him and went overseas a lot. I was a fan of Leon Gast’s movie (When We Were Kings) about Muhammad Ali. Then there was one about salsa, and I could relate to that story. It’s funny because that movie that Leon Gast directed shows the musicians who were an essential part of the birth of salsa music and gives a different, interesting take on it, since you see the guys working their day jobs. It’s kinda how things are now in music. It’s good to be grounded in many aspects if you can.

How would you assess the cyclone of change in music since your first Neptunes hit?
It changed with technology. It’s not a bad thing. People have access to anything in the palm of their hand [Hugo picks up his iPhone and shows it closely to accentuate his point]. These things offer these apps on music. I have my Korg synthesizers, a sound module for backup, and a monotone on my phone. I even have a tuner and a compressor. There’s thing called Smule, and it makes a song on the spot. It’s an instant tune.

Do you see technology as a tool to enhance music?
It can be a tool to enhance. Sometimes you see people, and they hold their phone, and it’s like they’re going to communicate with it, and sometimes you just don’t need to. That’s a deeper conversation, and we don’t have to go into that. I wonder what Ralph Waldo Emerson would do if he had an iPhone. I wonder if he would be so self-reliant.

In the days of Twitter and Facebook, how do you manage to remain reclusive?
Twitter is a good venting place. Some people, it’s like their life. Me, sometimes it’s just, I don’t necessarily curse on Twitter, but it’s… well maybe I’m just using it wrong. That’s what it is.

What do you use it for then?
Before, I was putting out songs on it. It was like, “Here’s a song, I don’t have much to say but it’s for free.” I don’t know if it’s hurting the business or anything. My manager Corey told me to stop doing that because I could make money on it or whatever. Then we throw it on Soundcloud and I ask, “Where’s the money?” and he says it’s just promotion. [Laughs] The difference between the two is Soundcloud is orange, and Twitter is blue. That’s why the practice of making songs is better than putting stuff out. I’d rather practice scales from someone more knowledgeable than put something wack out. With families and regimens changing, as time goes by, you have to follow a regimen. There are four seasons and holidays that need to be marked down on a physical calendar. Also the secret is to carry my alarm clock when I go places. I’m looking forward to the iPhone 6, and that watch looks pretty cool. I think I’ll get one of those, too. Daniel Kohn is checking his phone right now. Follow him on Twitter.