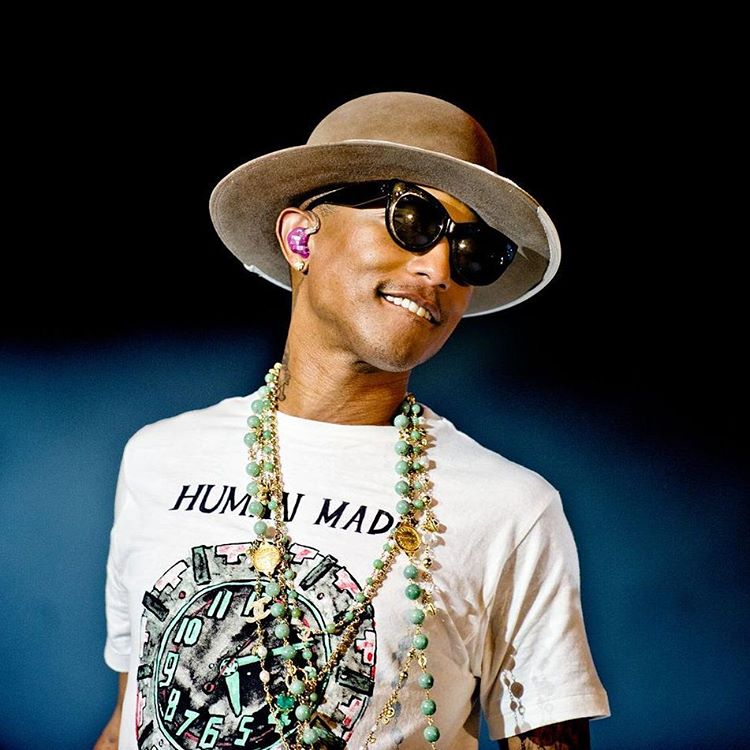 There are few musicians in this year’s Oscar race who can have had as significant a contribution to the projects they’re attached to as Pharrell Williams with Hidden Figures. Already Oscar nominated for the phenomenal hit song “Happy”, which was attached to Despicable Me 2 in 2013, the multi-hyphenated musical artist steps into his second feature film as a producer—after last year’s Dope—with Theodore Melfi’s movie, which tells the true story of the African American women working at NASA in the 1960s who helped send the first U.S. astronauts into space.

“When we heard about the project, it just made sense for everything we stand for,” says Williams. It had come to him through his producing partner Mimi Valdés, who had taken a meeting with producer Donna Gigliotti. “It was about uncovering a significant part of history, and the lifting of women and the highlighting of their importance.”

The film stars Taraji P. Henson, Octavia Spencer and Janelle Monáe as Katherine Johnson, Dorothy Vaughan and Mary Jackson, three “computors” at NASA’s Virginia facility, who were responsible for the complex mathematical calculations behind the early space program. Based on the book by Margot Lee Shetterly, the film highlights the extraordinary talents of these three women, and the unthinkable complications of their lives in an era in which segregation was still rife.

Initially hidden in a windowless building—away from the white, predominantly male scientists offered positions of power—these women, and many like them, worked tirelessly to ensure the safe delivery and recovery of NASA’s rockets in an era before computers made mathematical calculations easy. When the first IBM was installed at NASA, they learned the complex machine code necessary to program it. And when John Glenn braced to take his first space flight, Katherine Johnson’s calculations were the only ones he was prepared to trust.

The fact that their names had been largely forgotten to history until now inspired Williams, who was born in Virginia in the 1970s, and so saw it as a homegrown story. In addition to producing the movie, Williams contributes no fewer than eight pieces of original music to its soundtrack, and collaborated with Hans Zimmer and Benjamin Wallfisch on the score. “Mimi knew I was going to lose my mind when I heard about Hidden Figures,” says Williams, “And I was all about it the minute I heard about it. The next thing we knew, we were in the middle of it, seeing it through.”

The complexity of sending men into space was fascinating to Williams. “When you find out some of these intricate parts were played by women, then it becomes a whole other thing,” he explains. “The picture becomes much more full and you get a real, holistic understanding for how it got done. We know we got there, but the truth behind what specifically happened introduces you to the real pitfalls they faced. And you see, at every turn, there was a woman.”

Katherine Johnson’s considerable talent was not ignored at NASA, where she was elevated to the highest offices to do her work. But there were no bathrooms for African Americans in the building to which she’d been sequestered, and so Johnson endured a 45-minute trip each way just to use the bathroom. This one of the many challenges Johnson faced inspires one of Williams’ songs for the movie: “Runnin’”. “The song is about what they must have been going through in that era,” notes Williams. “They realized there wouldn’t be a day when they weren’t running.”

Williams worked on the music as the film was coming together, and “Runnin’” was ready in time for Melfi to shoot those scenes on set. “Ted shot the ‘Runnin’’ scenes while he was listening to the music in his ears,” Williams notes. It becomes a recurring theme, as Russia’s successful space launches make global headlines and political pressure requires that deadlines are brought forward.

The song, though, that Williams finds most uplifting is “I See A Victory”. “That’s the one that lights me up,” he enthuses. A soaring anthem, “it’s about the necessity of reminding ourselves that everything’s going to be OK,” notes Williams. “But it also parallels the early ’60s with what women are going through to today. And also, what men go through when they see their counterparts suffer and they want to stand behind them, beside them, with them.

“No matter what is going on in your environment, you know that if you pull all the way out to the Moon’s view of Earth, you’ll realize, ‘OK, that’s where I am right now, but look at how far we’ve come, and look at where I’m headed. This is just today, but I see a victory.’ That’s what that song is about.”

Williams says he always knew he wanted to make a big contribution to this project, and that it required a fresh approach to music. “Hans Zimmer, Benjamin Wallfisch and myself got into a room and we all worked on the score,” he recalls. “We wanted to make sure there was a different offering, because when you listen to most scores, the chord progressions and the melodic direction usually has a Euro or Anglo basis to it. Our interesting challenge, which we were happy to rise to, was to have something that was a little more reflective of how Katherine, Dorothy and Mary must have been feeling. It was a cool, interesting perk that came along with getting the job.”

Enforced segregation may have come to an end, Williams notes, but there are still huge challenges of inequality that Hidden Figures attempts to address. “This still happens to women,” he insists. “As men, we have become desensitized to it, like it’s the norm.” But he remains optimistic about what the future holds. “I think the norm is changing. Everything is changing right now, as we speak. I think that’s a beautiful thing. It’s a time for true equality.”