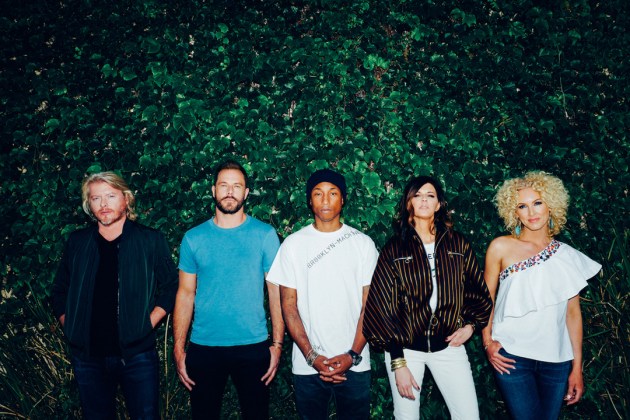 Little Big Town went into the studio to record their seventh country album The Breaker with newfound freedom thanks to a 2016 collaboration with Pharrell Williams and Justin Timberlake on a unique project titled Wanderlust. The eight-track release showed a sultry new side to the country quartet with beat-driven tracks and striking vocals. It was during this new adventure that Little Big Town ran into Timberlake, and the band recently told Taste of Country that the chance meeting wasn’t planned.

“We were in the studio working with Pharrell in Los Angeles,” Phillip Sweet recalls of their Timberlake studio encounter. “We went through the little kitchen and there sits Justin having his coffee.” While Little Big Town had previously met Timberlake, Karen Fairchild jokes that they reintroduced themselves as Chris Stapleton’s friends. The band and Timberlake began talking about their project and invited him to listen to the new music.

“He came and listened, and he loved it,” Kimberly Schlapman recalls with a big smile. “That just sparked a lot of inspiration and, all of a sudden, right there on the spot, we had an idea man who had some ideas he wanted to get out there, and we welcomed them. We had so much fun! He just oozes creativity. We all know that about him. but to see him in the moment work like that was so much fun and infectious and just like a drug.”

Jimi Westbrook says it was always a fun time in the studio with Timberlake and Williams because no matter what happens, they’re always dancing. The fast friends soon found themselves playing “The Boat” for Timberlake, and the quartet began laying down vocals as he directed them. Timberlake and Little Big Town discussed their admiration for the Oak Ridge Boys’ harmonies, and the singer immediately got inspired and said he wanted to do the bass part on the track.

“It was all in the moment, and going into that day, we never would have thought that would have happened, but that’s just the way it all worked out,” Westbrook shares. Shortly after their studio collaboration, Timberlake took a photo and uploaded it to Instagram. As Schlapman points out, “That’s how the world knew that we were even at the same place.” Timberlake is a Tennessee boy and Williams is from Virginia, so the musicians naturally formed a bond over their connection to the South. It was this experience and studio freedom that Little Big Town says helped fuel their forthcoming seventh album, The Breaker.

“I think what we learned from [Pharrell] is to be free and let the ideas flow and just go with it,” Fairchild tells Taste of Country. “If it feels good, go with it, because that’s certainly what we did with him, and it was a really safe place to throw out any kind of idea, whether it was lyrically or musically. I know for certain that we took that with us into the studio this time, for sure. We just felt freedom, and we were in such a creative place already, he put us there, and we carried that along. I really feel like we took a lot of what we did with him into this record right here.”

Sweet adds that Little Big Town brought what they learned from Williams and the feeling of not having any boundaries into the recording of The Breaker, which drops on Feb. 24. “Before when we may have said, ‘Well, I don’t know if we can do that.’ [This time] we didn’t do that to ourselves. We didn’t stop ourselves. We pushed through those kinds of self-doubt, which was so fun,” Sweet explains. “His energy in the studio is infectious. He’s so aware and present and engaged and so open, and wants to hear every idea and there’s no bad ideas. It was very refreshing.” Little Big Town’s seventh studio album The Breaker will be released on Feb. 24.