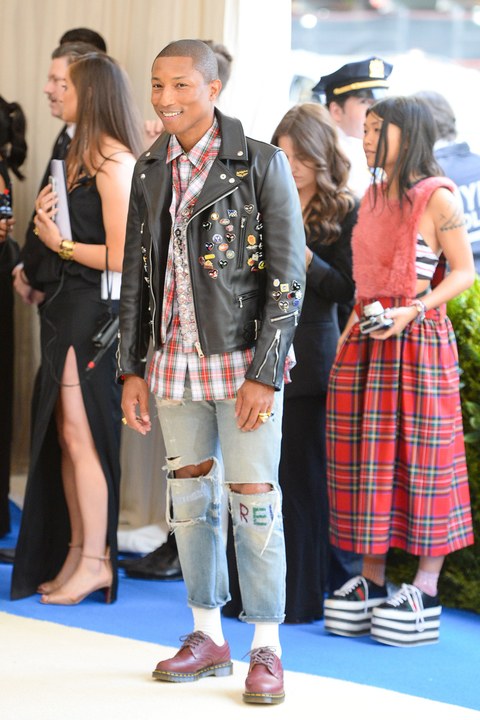 On a Wednesday afternoon in March, Pharrell Williams goes to a half-dozen places without ever leaving his chair. He begins at a music studio in East Hollywood, where the eleven-time Grammy-winner breaks up the day’s recording session for lunch (a Sweetgreen salad). But in no time, Williams is ruminating on Tokyo, a city he refers to wistfully as home: “Every sensory experience they offer you is revolutionary. Man, their bubble gum is everything.”

The next moment, he’s talking about the recently discovered planetary system Trappist-1, noting cryptically, “We’ve probably already been. . . . How many times has the Big Bang banged?” The discussion then time-travels to the future, where CRISPR genome- editing technology has cured humanity of its terminal maladies. “Get ready, because ten years from now life as we know it will be unrecognizable,” he says. “You realize that the BlackBerry was basically Atari, right?”

Then, suddenly, he’s back in L.A. at the Dolby Theatre, where, in February, he sat as an Oscar nominee for producing Hidden Figures, the story of female African-American scientists at NASA. Then he’s back on the road, finally landing on the subject of Paris, where in a few days Williams will witness, with a mixture of awe and delight, his friend Karl Lagerfeld sending a rocket into the stratosphere of the Grand Palais. Of all these places, though, it seems likely that he spends the most time in the future.

This pinballing quality, combined with a laconic drawl and staggering talent, has inspired descriptions of Williams that range from mystical to out-of-this-world—though Williams would probably prefer the term extraterrestrial. (This is, after all, a man whose performance rider calls for a portrait of Carl Sagan in his dressing room on tour.) And of the hundreds of creatives with whom Williams has collaborated, it’s perhaps Rei Kawakubo who most shares this alien sensibility.

Williams first recognized the singularity of Comme Des Garçons when he was in Tokyo—where else?—about eight years ago and noticed the fitted cut of pro BMX rider Nigel Sylvester’s CDG motorcycle jacket, which led to a Dover Street Market expedition. “My mind was just blown,” he says. “Rei is someone who not only refuses to think inside the box—she refuses to acknowledge the box at all.” And while Williams can’t recall when he saw his first Comme show, he remembers precisely how it made him feel.

“It was like watching Edward Scissorhands for the first time,” he says, “not that they’re comparable in taste, but they both present bold ideas that come off so effortlessly.” In the sphere of music, Williams says, Kawakubo’s nearest equivalent is Björk, the experimental Icelandic electronica artist. “Normally with avant-garde fashion the question is ‘But who could wear that?’ ” Williams says. “With Rei, the question is ‘Are you worthy of wearing that?’ Man, I would love to fit into her world.”