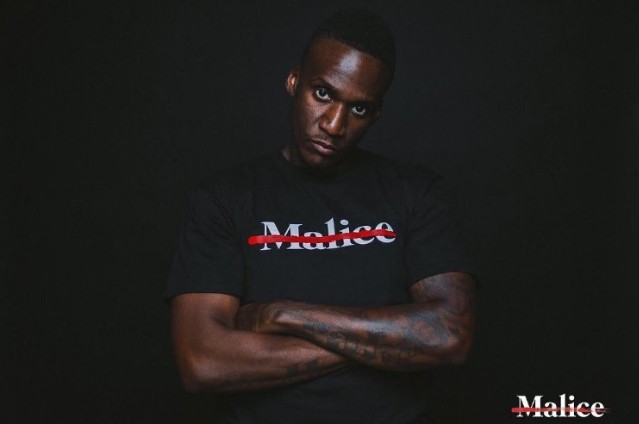 “This world is going to eat itself,” says No Malice with a straight face during a recent press run in New York City. He’s referring to the turmoil in world that is projected on every smartphone, laptop and TV screen these days. It’s the Virginia poet’s second go around on his own, well not completely solo, he credits a small circle of folks with similar beliefs (his Reinvision squad), and of course, God, as his “new team.” No major record label or yes men — just a man and his words.

“I don’t be trying to fish for old listeners,” says the loving father/rapper about his new material. “I’m true to myself and true to how I feel. Producers Profound Sounds out of Virginia really helped me go places I felt I’ve never been before [musically]. They made me reach in different pockets.”

No Malice’s recently released album, Let The Dead Bury The Dead, is a continuation of the metaphorical ghetto gospel that he delivered on his first solo project Hear Ye Him — which he dropped in 2013. Instead of talking about all the foreign cars he owned and mountains of powder he moved, Pusha T’s older brother has been rhyming words to help others find peace since he skewed away from the Clipse. “I feel like I said everything I wanted to say,” says No Malice about the project. [But I know] lot of my lyrics go over peoples’ heads.”

“Let The Dead Bury The Dead, [the title], it comes from Luke 9:60, there was a man who wanted to follow after Jesus. He asked Jesus: ‘Suffer me first, to go bury my father, then I’ll come follow you,’ says No Malice. “And Jesus said ‘let the dead bury their own dead, but you go preach the gospel.’ And that’s how I feel, I feel like there is nothing more important than preaching the gospel. I don’t care what’s going on.’

He names the tracks “Let’s Die,” “Sky Crack,” and “LU. 4:5″ as a few of his favorite cuts from the LP, but admits that it’s hard for him to pick between his “babies.” One thing he knows for certain is that the path less traveled is the one he wants to stay on forever. “I plan on going everywhere this album takes me,” says No Malice. “Ever since I left the Clipse I don’t even make plans or say what I’m going to do — as long as God gives me life I’m just trying to let him lead me in my art, [it’s the] gift that he gave me. I’m trying to use it to glorify him and and to help humanity. Where I’m from, everyone wants to rap, and that’s cool I’m not a dream-killer, I just want them to know what I experienced so they can side-step some of those pitfalls.”

“These dudes are young and rich, what else are they supposed to do,” says No Malice in defense of today’s young rappers. “They take a tongue lashing from a lot of people but I don’t condemn them. It’s not going to be until they get a little more life experience, or maybe till they lose a little bit of money, or someone betrays them, or they lose family members — that [they’ll] start seeing what life is truly about and the things that were important to [them] at one time become a little less important, but I don’t condemn them dudes. And if they don’t know [the truth] it’s because we ain’t taught them.”