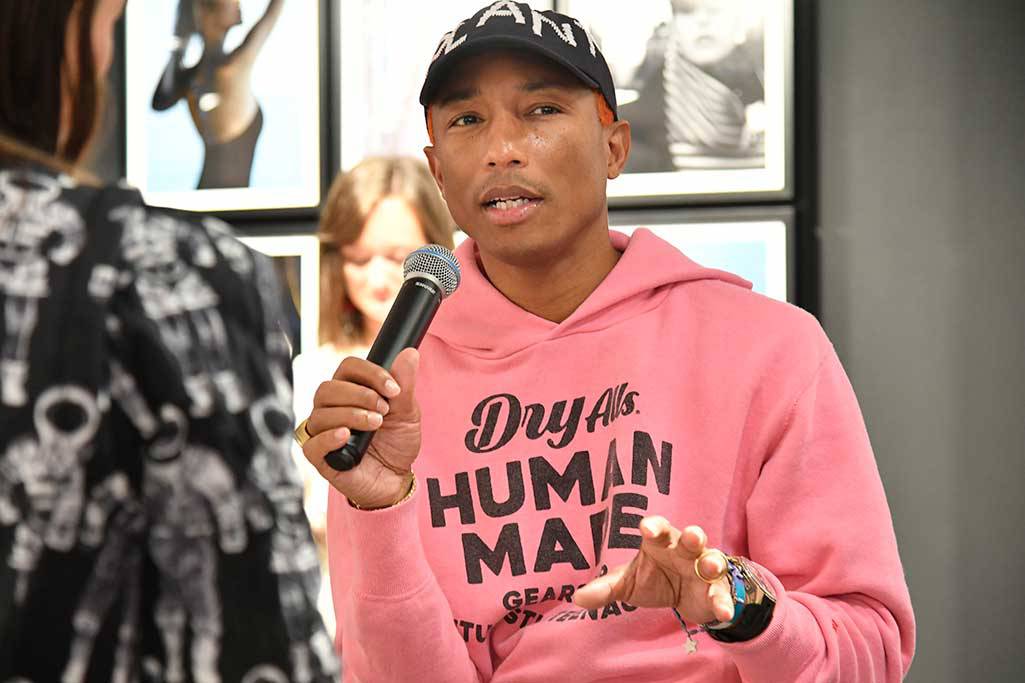 In an interview with WWD, Williams said he expected the Chanel sneakers could go for up to $40,000 on the resale market, noting that the recent Adidas collaboration with his collective N.E.R.D. — released exclusively at the ComplexCon — was already being offered for $10,000. But he was philosophical about the sneaker craze. “At the end of the day, they’re just shoes,” he mused.

The resale value of the Adidas Originals NMD Hu shoe shot up to $32,000 after some 120,000 people pre-registered on the web site chanelatcolette.fr for the opportunity to buy one of the 500 pairs — make that 499 — on sale, according to Sarah Andelman, creative director and purchasing manager at Colette. “Officially, it’s the first time to my knowledge that the Chanel name has appeared on a product made by another brand, so it’s true that this makes it something very special,” she said. Pharrell sat down with WWD to discuss quantum physics, sneakermania and why the future is female.

WWD: You’ve done absolutely everything with Chanel. Did it feel like designing product was the missing link in your relationship with the brand?
Pharrell Williams: You could say that it was, but I didn’t think that. I just was happy to try it, you know. I’ve been honored to just work with them as long as we have, doing all the different things that we have, and to have them jump out the window and do sneakers with me was so cool.

WWD: I think it’s the first time Chanel has collaborated with another brand, because this links them with Adidas through you.
P.W.: Yes.

WWD: So you’re breaking ground for a brand with a history of more than 100 years. How does that feel?
P.W.: Crazy.

WWD: Why did you think they might turn you down?
P.W.: Because they had never done it in the history of the brand, so I’m grateful.

WWD: Can you share any details about the process of designing the sneaker?
P.W.: We picked five different designs and these are the ones that Karl liked, the ones that said “Chanel” and “Pharrell,” which I was honored by, because he could have picked any of the other ones that just said “Chanel.”

WWD: You’ve customized your pair. Can you tell us about all the different messages you have written on your shoes?
P.W.: Well, “Women’s Rights” is, like, the number-one thing, right? You guys deserve to get paid as much as men do. Then there’s another message that says: “God Is the Greatest.” And “Others First.”

WWD: You often talk about the importance of spirituality in your process. What is your relationship to God?
P.W.: Well, some people believe in God, and some people don’t, but for the people that don’t, they at least have to acknowledge the universe. For me, God is the universe. When they say, “God is everywhere at once,” some people say, “Well, how could that be?” The only way that that makes sense is if God was everywhere, meaning, we were inside of God. Now, I’m sure there are some cells in your fingertips that don’t think that you actually have a leg, or that there are other cells on the other side of your body, and they’ll never think that. In fact, they don’t even know that they’re inside of a body. And, if you think about it, fish are the same way. If you told a fish that there is such a thing as water, it would argue with you, until it died and floated to the top, it got fished or washed ashore. That’s my belief.

WWD: So you have a very Buddhist view of things.
P.W.: There’s something so far beyond our comprehension, beyond our perception, that exists. I mean, scientists say there’s more than three dimensions, there’s up to 11, if you ask the top astrophysicists. Well, if there are 11 dimensions, what else is out there? But the hubris of the human being is, “Well, if I can’t see it, it doesn’t exist.” But tell that to paper, which has no idea that we’re here, because we’re three-dimensional and it is not. It’s two-dimensional. Or a dot, which is one-dimensional. So for me, I dare not have that hubris, especially when I feel what I feel. I feel something beyond this dimension. I feel something greater and bigger than I could ever understand, so I appreciate it, and even if that boils down to just math that I can’t comprehend…I’m going to still honor it because I live and exist within it. That’s me. That’s my belief.

WWD: I read someone got robbed in California last week trying to resell the Adidas sneaker designed with N*E*R*D for $6,000. With only 500 pairs of Chanel sneakers going out to lucky lottery winners, how high do you think black market prices can go? Will this be the most expensive sneaker in history?
P.W.: Well, the N*E*R*D shoe, I’m told, is at $10,000, so I can only imagine the Chanel one probably will be three to four times more than that. It’s Chanel.

WWD: What do you think the craze for sneakers says about the times we’re living in?
P.W.: I don’t know what it says or means. I don’t know what that means, because it’s material, and so, I guess, depending on what age you’re at and what you’re into at the time, there is some significance. But at the end of the day, they’re just shoes.

WWD: Do you think you’re going to be doing anything more with Chanel design-wise?
P.W.: I think that’s up to them. I would love to.

WWD: You just did a podcast for Chanel. Do you have a preference for this medium over other traditional media?
P.W.: I don’t know. I’m not really big on interviews. I’m not big on interviews for many reasons. One, I don’t like listening to myself [the Chanel podcast was broadcast live over speakers in the store.] Like, that was so odd. It was kind of like listening to a voicemail that would not hang up. It’s like, “Screech, screech, screech.” The second thing is, I don’t really like talking about myself as much. The third thing is talking about your art form too much dries out the lucidity and the vividness of it. In other words, if it was a painting, by the time you got done doing the interviews, the painting will have faded a bit, in terms of personal connection.

WWD: You were saying that you’re like a method actor willing events with the color of your hair. What message are you sending out with your orange hair?
P.W.: It’s gotten long. I need to shave it now a little bit, but it was more like, I don’t know, I’m just, like, in a detached place right now. Like, grounded in certain ways, because I have my family — I have a beautiful family — but creatively detached from reality a little bit, which is good. It’s quite good to be suspended right now, especially in my country, with what we have going on. It’s a f–king zoo. There’s so much negative energy.

WWD: What other projects are in the works?
P.W.: Well, the Ariana Grande stuff is pretty amazing. The things that she has to say on this album, it’s pretty next-level. Her album is amazing. And the Justin Timberlake is crazy.

WWD: So you’re still getting a kick out of producing for other musicians.
P.W.: Yeah — that’s what I’m on this planet to do. It was never really about me. The impetus for my place on this planet and this dimension at this time was to serve. I personally believe that the savior of my country will be galvanized Millennials and galvanized women. I think this world would be a very different place when we see positions of power held by women. It would just be different, because a woman’s body is the conduit to all life, meaning everybody, even the chauvinists, they are in this world because a woman’s body allowed them to exist, A. B, just the way that the woman’s body is built, it is built with the potential of creating life, and I think that would just at least offer higher odds for them to consider the decisions that they make when they look at the nuclear button, they have the nuclear codes. Because they know what it takes to make a life, they’d think twice about taking one, or taking thousands, or taking hundreds of thousands or millions of lives. I would love to know what the Planet Earth felt like — matriarchy.

WWD: Have you always felt that way, or has getting married and having children changed the way you feel about women’s roles?
P.W.: It’s just been an ongoing process from, like, loving women and appreciating women and making all kinds of songs, you know — clean, dirty: it’s a journey. But then you get to a place where you recognize the oppression, the repression, the suppression that you guys go through, the things that you’re subjected to. And then you think, “Man, that must be tough.” I see my mom subjected to things or people that I care about, and it’s not OK. And we’ve all been there, but you learn, and you get better. You elevate until you’re enlightened, you know. And then you just want to contribute to the cause. I’m not saying all women are great, all women are perfect, all women are righteous. Some of them are evil, just like men are evil, but there is an imbalance. I think that’s what’s wrong with our planet. There’s an imbalance with the positions of power. It’s just too masculine. There needs to be more femininity.

WWD: You’re obviously really in touch with your feminine side, down to the way you wear unisex clothing.
P.W.: Well, I mean, women taught me. Everything: fashion, taste, how to, like, take care of my face, how to see deeper into things and not just be so, like, hooked on just aesthetics, but actually to go deeper. That’s how a woman’s mind works. Don’t just stare at the painting, figure out what it means. You know, it was the women that enlightened me. We owe the female species.

WWD: Do you think seeing you fronting a handbag ad, or seeing Jaden Smith wearing a skirt in a Vuitton ad, could convert men who are less progressive?
P.W.: Yeah, but hopefully they have their own sense of self-discovery within themselves and it doesn’t take somebody on a poster or a screen to do it. And you’ve got to think, like, Gabrielle [Chanel] was doing it way back when. I mean, the black jacket was off of a bellman. She put it on a woman. Like, she got it [snaps fingers] instantly.