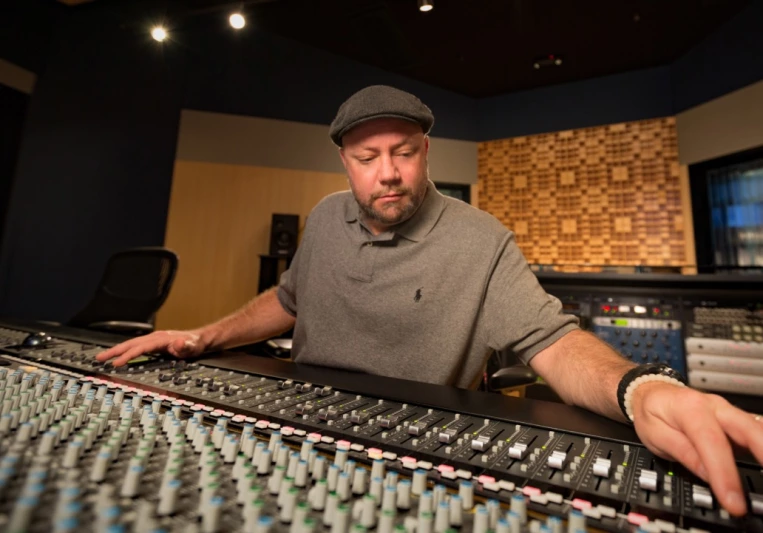 For “Studios Sessions,” we delve into the stories behind the long hours in the studio and all that goes into making an album by talking with artists, producers, engineers, photographers, and more who are intimately connected to the recording process with some of the biggest artists in the world. These are the stories that rarely leave the booth. Over the last 25 years, two-time Grammy award-winning engineer Andrew Coleman helped The Neptunes make nearly all of their iconic songs, Snoop Dogg create one of the biggest songs of his career and much more. The history he’s made is not lost on him.

“Recording and mixing the Clipse’s entire Hell Hath No Fury album and it being recognized as one of Rolling Stones’ Top 10 Hip Hop Albums of All-Time was an honor,” he told REVOLT. In this installment of “Studio Sessions,” Coleman discusses Missy Elliott’s creativity making Supa Dupa Fly, The Neptunes’ creative process, and the musical magic of Virginia Beach.

One of your earliest major credits was recording engineer for Missy Elliott’s debut album, Supa Dupa Fly. What was the most creative thing you saw during those sessions?
The way Timbaland cut up the samples, and flip those beats upside down and sideways. It was crazy. I never saw anybody doing sampling like that or cutting like that, as he did… He would always have his headphones on while he was behind his keyboard. He wouldn’t let anybody hear anything… The first time “The Rain (Supa Dupa Fly)” [played], the whole room just was floored. That music tapped into something that felt familiar and at the same time unheard of. It was the same thing with Chad and Pharrell. I had never heard drums like that either — those Neptune drums. Chad Hugo and Timbaland are the illest ASR-10 dudes ever. Everything was going to analog back then, too. That’s why it had that sound. Everything back in those days had that fatness to it.

What was it like recording Missy?
Insane. It would be just her and I in the studio when I was cutting vocals with her. She kicks everybody out of the room. She’d have 10 ideas for hooks and back then it was 48-track analog. So, you’d have to be on one reel — 24 tracks — and then you’d transfer a two-track mix of the beat to another reel, and then cut vocals on the second reel. So with her, she’d do five different hook ideas and would do three or four tracks of vocals per hook (laughs). That’s 16 vocals right there, plus she would eat up tracks like crazy, and back then you had to wait for the tape machine to rewind. The rewind time alone probably took forever and she was always very quick. You had to be on your toes with her. She was a monster in the studio.

You linked up with Chad Hugo and Pharrell Williams in 1995. How did that union first happen?
I started freelancing at a studio here in Virginia after I moved here from Florida and I was here about a month. And I guess somebody from Teddy Riley’s camp booked them for like 10 days at the studio, and I was there, and we hit it off.

What are some of the longest sessions you’ve been in with those two?
We’ve gone 16, 18 hours. We’ve gone all day and all night. I’ve traveled to L.A. for sessions and been up for 48 hours. Time is irrelevant in the studio.

One of my favorite albums you worked on with The Neptunes was Kelis’ debut album, Kaleidoscope. What was Kelis like making that?
She was a rookie, if you will. It was kind of like we were bringing her into our world. We were showing her how to work properly in the studio. I think she was 17 or 18 when we did that first record. She was young, so she didn’t really have much studio experience. We kind of coached and helped her learn mic techniques and whatnot. That record is still ahead of its time and that I think Kaleidoscope could come out today, and we’d be like, “Whoa!”

Why do you feel you’ve been able to work with The Neptunes for so long?
Adapting to their workflow and coming up together really. Everybody was unsigned and unheard, and we became good friends, and I could facilitate what they needed.

What album that you’ve worked on has a deep connection to you?
The first N.E.R.D. record (In Search Of…) was life-changing for me. That’s when I really realized who these guys were with the diversity to go from all different vibes of hip hop beats to full on rock songs in the same day, basically. To see somebody who can cut up the beat on the ASR 10 and then sit behind a drum kit, and play the same beat is incredible. After the first N.E.R.D. record came out, we started working with Justin [Timberlake]. That Justin record (Justified) was special, too. The very first day we did ‘Like I Love You.’ On that same day before he came to the studio, we were making the beat to the song. We had the live drums and guitars tracked and everything. Justin walked in, heard the beat, and that song was done in like three or four hours.

You also worked on the album that took Snoop Dogg’s career into a new generation: R & G (Rhythm & Gangster).
We had the whole Record Plant Studios booked out. It was a complete studio lockdown. We had Snoop, we had Mariah [Carey], Slim Thug, and Christina Aguilera. We had four rooms going. Those were crazy times.

Obviously, “Drop It Like It’s Hot” was the biggest song from that album.
Yeah. I have a funny story about that.

That’s what we want to hear on “Studio Sessions.”
One day, Snoop was like, “Hey, I’m going to come in a little early. Is that OK with you?” I said, “Of course, man. You tell me what time and I’ll be there.” Chad, Snoop, and I were in the studio. I have the beat looping and Snoop’s writing to it. Chad has his keyboard up and he’s just riffing around. I don’t know why, but I just hit record on Pro Tools and when he hit that synth part that goes baaa-ba-ba-ba-baaaaaaaa when the beat loops. He played it one time. I stopped it. Snoop, Chad, and I looked at each other like, “What the f**k just happened?” From that moment, I put it in other spots of the song. Pharrell shows up about and hour or two later. He hears it and loves it. I think Jimmy Iovine came through and he went crazy. Then, he called the entire building down to hear this. It was crazy.

Snoop’s legacy is so respected, he can pretty much get anyone on a song. Can you attest to that?
Yeah. We were in the middle of recording Snoop’s Bush album. P and Snoop had been talking about having Stevie Wonder sing/play on something and then this track “California Roll” came up. I’m not sure who had Stevie’s number, but they called him and sure enough, he showed up less than two hours later. It was crazy. P already had the stencil for what he wanted him to sing. He got in the booth and did like two to three takes, and that was it (laughs). Then, he asked if we wanted any harmonica on it! Uhh yeah. Of course! I hit record from the top and he riffed through the track once or twice, and we got everything I needed for the comp. It was an amazing session. That was a bucket list session.

You were also part of JAY-Z’s “Excuse Me Miss,” which was one of his first love singles. How was his and Pharrell’s chemistry?
Pharrell’s thing was always let’s go left. Everyone is going this way, let’s go the complete opposite. If you walk in the studio and say, “Give me that club banger,” he’s like, “Ahhhh, s**t.” But, if you walk in the studio and go, “Yo, man, I want to go left,” then you’ll be happy. You have to trust him… I can’t tell you how many times we were in the studio with an artist and they didn’t understand Pharrell’s vision of the song. He’d have the whole song done or the melody done and the artist would go, “Nah, man. That’s not what I’m looking for.” They would turn it down, and sometimes it would become a hit for somebody else.

Pharrell is the more popular half of The Neptunes, but what have you seen in the studio that can speak to how important Chad Hugo is?
Pharrell always has an idea in his head. You have to come in the studio and get it out. He’s always flowing with ideas. It’s funny when he gets out of the car to go to the room, he goes straight to the studio to get behind the keyboard and regurgitate what’s in his mind. It’s a process he goes through. He has the chords, melody, drum sounds, and the beat in his head. So, he’ll get it all out of his system. Then, Chad would come in and go, “We need a bridge.” Chad’s musical knowledge on top of Pharrell’s creativity works so well.

At one point in 2002, The Neptunes ran music, producing five Top 10 songs on the Billboard 100 and pretty much running the charts. Did they discuss that or was it business as usual?
That was insane. Of course, we talked about it. It was like, what the f**k is going on? It was a whirlwind. It was a breath of fresh air. Music is cyclical. Back in ‘95-‘00 was the start of a whole new cycle. Timbaland, Missy, and The Neptunes coming out of the same cul-de-sac. That’s why he named his festival Something In The Water, Virginia Beach put this place on the map.