Game – It Must Be Tough feat. Pharrell (No DJ) 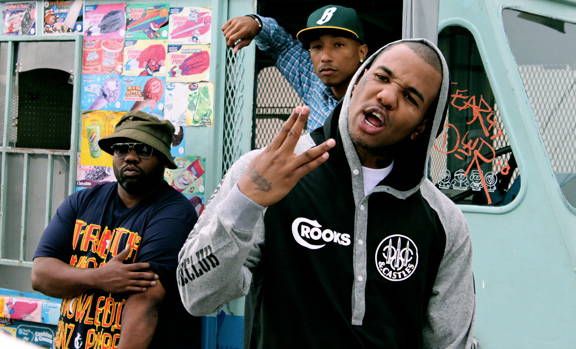 Here is a new/old Neptunes track by Game titled ‘It Must Be Tough’ which is initially from Game’ R.E.D. Album Session from two years ago, but Game decided to put that leftover on his upcoming mixtape ‘Calfornia Republic’ hosted by DJ Skee that is coming out on Thursday, its pretty smooth, check it out below, btw I’ve managed to get rid of the DJ at the beginning, thanks to Darrenlaking.

Behind the scenes of Jared Evan’s 4th Chapter tune off his upcoming project The Fourth Chapter.

Here is the final and mastered version of Jared Evan’s Anywhere featuring Pharrell & Game that will be on his debut album, it’s pretty dope, check it out below.

Teyana Taylor To Tour With Game

Teyana Taylor is currently on tour with rapper Game, check out the dates below, thanks to EarstyleNET.

Check out this little preview of Jared Evan’s Neptunes produced ‘Instant Gratification Leftover’ tune titled Anywhere that we’ve heard before back in March, in the meanwhile, I’ve managed to edit the tune with Game’s verse on it for the fans, check it out below

I’ll take it if it came from Pharrell,” he told Hard Knock TV. “The reason he probably said that is because he knows what I’m capable of. I don’t think I’m underrated because you can’t sell as many records as I’ve sold being underrated. I just don’t think I get as much notoriety because I don’t do the things other rappers do: I quit wearing chains and jewlery and s**t. I don’t go to award shows, you don’t see me on the red carpet.” Game recently declared Ace Hood as the most underrated rapper around at the moment.

It’s a Friday afternoon in Times Square minutes before rush hour begins. People are bustling through the New York City summer streets, but posted up in the Renaissance Hotel lounge, Jayceon Taylor acts like he doesn’t have a care in the world. The 31-year old emcee is seated among a crew of about 10, messing around with his new Android phone. He’s taking 3D pics of his friends eating buffalo wings and then showing them the photographic proof. “Look at this shit, man,” he says about the noticeable difference in 3D quality. Game doesn’t look like the shit-talking rapper who plots the demise of Lil B while simultaneously seducing Erykah Badu on his fourth studio LP, The R.E.D. Album. Rocking a red Nike basketball Jersey, he smiles like he’s in a boy-band (especially when he’s dissing someone) but stands tall and built like their bodyguard. He doesn’t look crazy at all; he just looks like he’s having a great time making you think he is.

DX: Waiting played into your favor; especially with some of the collaborations you have on the album like Kendrick Lamar and Tyler, The Creator. They might have not been around a few years ago had you put out the album then.
Game: I think about that all the time. I think if we would have went with Justin Timberlake and a Pharrell single, just think of how many people wouldn’t have been on the album. So with that being said, everything that happened with the album, it benefited in my favor at the end of the day because I have the best album, period. From Tyler, the Creator to [Lil] Wayne to Drake to Dr. Dre and Pharrell, I think I’m the only Hip Hop artist that could have featured Dr. Dre and Drake on the same album or Pharrell, Wayne, Tyler, the Creator, Nelly Furtado, Beanie [Sigel], Rick Ross, everyone on the album, Wale, Mario. I put together the best possible album in this climate that I possibly could.

END_OF_DOCUMENT_TOKEN_TO_BE_REPLACED

Game’s long awaited R.E.D. Album finally sees the light of day today. Recently he sat down with TheSource.com to go track by track and explain each track’s personal story. He also tells them the album is his favorite and the most work he has put into one thus far. Find out why, the R.E.D Album in stores today.

Dr. Dre Intro
Me and Pharrell came up with the idea for Dr. Dre to narrate the album. Dre just told me to write it out, he killed it.

Momma Knows Ft. Nelly Furtado (Prod. The Neptunes)
That track is about my momma produced by the Neptunes, Pharrell made that beat on the spot for me. He asked who I wanted on the hook, and I had just happened to hear “Fly Like A Bird” by Nelly Furtado. I told him Nelly Furtado and he said okay, give me one second called her and we got it done that same night.