M.I.A. & Pharrell Williams In The Studio Working On Tamil Beats

Pharrell Williams In The Studio With M.I.A. 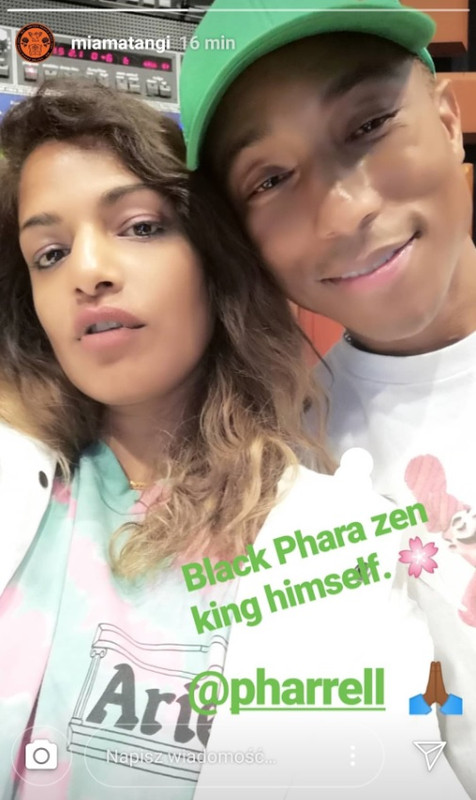 New Cover by Lydia, covering M.I.A.’s Bad Boy with Ellen Kim and Aye Hasegawa , the choreographer of the video which is directed by Ellen Kim. M.I.A. endured an eventful evening at New York’s fashionable Met Ball in May (10) – she argued with Pharrell and was ignored by Oprah Winfrey. The Paper Planes hitmaker caused a stir when she turned up for the star-studded gala and immediately became embroiled in a heated discussion with N*E*R*D’s frontman. She tells London’s Time Out, “It (the Met Ball) was amazing, the best bit was me and Pharrell having a fight… He was just telling me off like crazy. ‘You can’t just keep beating people up…’ I thought he’d seen the Born Free video, so I was actually listening because I thought he must be saying my video’s too violent. He was like, ‘You know you can’t keep giving people that s**t, you have to hand out the sugar.’ I was a bit offended…”

However the argument was quickly resolved by one of her famous fans – rap mogul Sean ‘Diddy’ Combs forced Williams to apologise for his outburst. She adds, “Diddy (was there and) was like ‘Oh my f**king God, last time I saw you, you were so fat (pregnant). He was just like, ‘I love you, we need you.’ And I was like, ‘That’s so good to hear because Pharrell just told me I was s**t.’ Diddy went and found Pharrell and made him come to my table, apologise and kiss my hand and s**t, which was awesome.” And Williams wasn’t the only person who was seemingly upset by M.I.A.’s presence – TV titan Winfrey wasn’t too keen to see her either. She explains, “Oprah seemed to be giving me the cold shoulder. She was dancing with Iman (Bowie). Iman was always dancing with me, hugging and kissing me. Oprah seemed really p**sed off with me.” Lol funny story, love M.I.A. though. Pharrell Williams knows just about everyone. He knows MIA, obviously, but he also happens to know Lynn Hirschberg. We had the chance to break the news to him about the pretty entertaining spat that’s brewing between the New York Times writer and her latest subject over this article, and his reaction is also pretty entertaining. Before we even explained the details of Maya’s Twitter antics to him, Pharrell exclaimed, “She’s an OG!” at the very mention of Hirschberg’s name.

After hearing the story, Williams, who was delightfully shocked, said bluntly. “She fucked with the wrong person.” We agreed, but then wondered if he meant Lynn Hirschberg, or MIA. “MIA, man! Do you have any idea how much weight Lynn pulls!?” We’re pretty sure he was making a joke, but if anyone would know that, it’d probably be Pharrell.