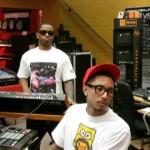 Pharrell is featured in the Concrete Jungle (2009), a documentary about the Skate & Hip Hop Culture. In the 1970’s, on opposite sides of the city and opposite sides of the country, two separate yet equally dynamic new art forms were emerging. Both possessed a rebellious spirit and quickly evolved into movements that have become a global phenomenon and the creative voice of a generation. Hip Hop and Skateboarding were born.