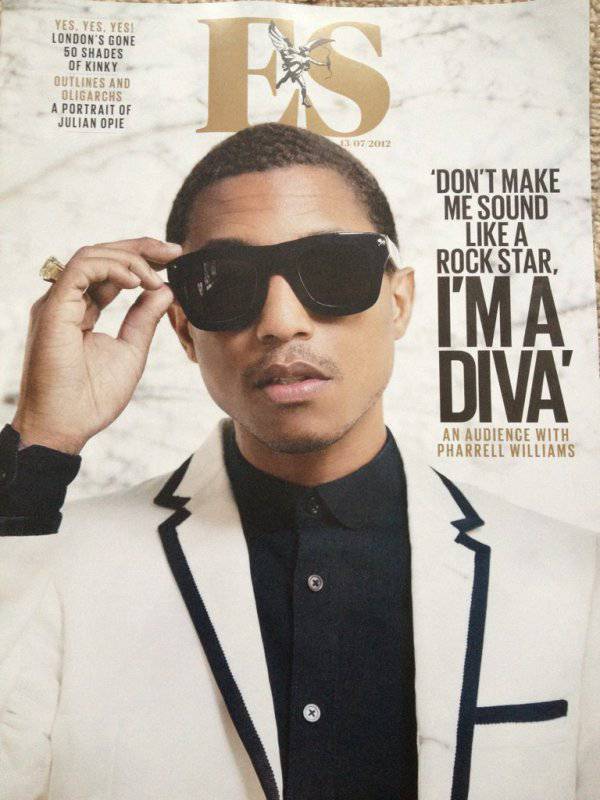 Who is Pharrell Williams?
By Amy Raphael, Photos By Sabine Villiard. He’s the enigmatic musician-slash-super-producer who made Justin Timberlake cool, sees music in colour, and designs not one but two clothing lines. Amy Raphael gets a rare audience On a sunny afternoon in central Paris a people-carrier with blacked-out windows pulls into the courtyard of a recording studio and a posse of young men appears, blinking in the sunlight. I’m introduced to the smallest of them. His hair is cropped short, his denim skater shorts hang low, his black Timberlands are Tipp-Exed with the legends ‘Anxiety Tranquilized’ and ‘Boredom Amused’. There’s an awkward silence as we shake hands. It’s a great day, I tell him. A glimmer of a smile. ‘Thanks, ma’am.’ I don’t know what to say; I was alluding to the perfect sky, not the honour of meeting Pharrell Williams. 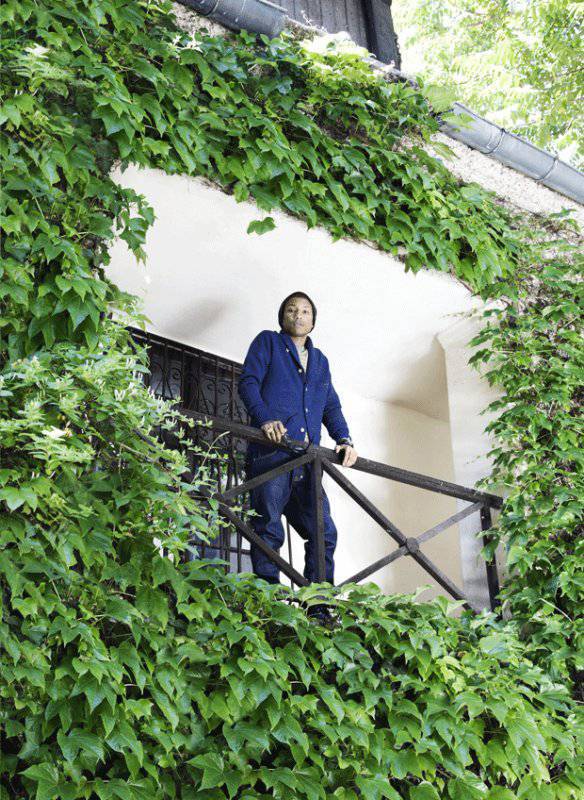 Williams may be a slight 5ft 9in, but he’s a huge star who is, according to Forbes, worth around £48.5 million. He is the frontman of the rocking rappers N*E*R*D (an optimistic acronym for ‘No One Ever Really Dies’) and one half of producer-songwriters The Neptunes. With the latter he has, quite literally, shaped the sound of modern hip-hop by producing hit songs for A-listers such as Justin Timberlake, Jay-Z, Nelly and Britney Spears. In the summer of 2003, Williams had co-produced nearly 20 per cent of tracks playing on British Radio. In America those stats doubled.

Not bad for a kid who was fired not once but three times by McDonald’s. Their loss; the ludicrously talented Williams, 39, is now one of the most successful artists on the planet, and he’s showing no sign of slowing down. Like many of his contemporaries, such as the tireless workaholic Will.I.Am, Williams is building a fashion empire. In 2005 he launched the high-end streetwear label Billionaire Boys Club (BBC) with A Bathing Ape founder Nigo, after he and the Japanese designer bonded over Star Trak. The A/W collection will be in Harrods next month. And now he is collaborating on a brand-new luxury collection called Bee Line. Williams is a tricky interviewee. He turns up an hour late — we’re lucky it’s not longer, apparently — and takes a while to warm up. When he does, he chats enthusiastically about the architecture and history of Paris, but is less keen to discuss fashion except in the most general, or even cryptic, sense. On the inextricable link between music and fashion he muses: ‘They’re like time and space. One can’t exist without the other.’ Williams is frequently asked about fame and girls in interviews, but often stonewalls. He makes a point of refusing to discuss his romantic relationships although, according to the American press, he was rumoured to be dating Jade Jagger in 2003 and has had a long-term relationship with Vashtie Kola, a fashion designer and music director. Today he mentions a woman in his life but won’t be drawn on who she is.

He may be reluctant to talk about romance but Williams is hugely proud of his parents. He was brought up in Virginia Beach, Virginia, with his two younger brothers. His father was a handyman and his mother a teacher; it sounds as though the boys were indulged, but not overly so. ‘My mum thought her sons could do no wrong. She lived for us. There was plenty of discipline, but we knew we were loved. My dad is a nice guy, Southern, old-fashioned. He restores cars now. My mum has just gotten her doctorate in education.’

The young Pharrell attended a school for high achievers and regrets only doing ‘enough to get by’. Was he too busy chasing girls? He smiles. ‘I was quiet with the girls at high school. I lived in Normalville USA and I didn’t look like the average kid. I was self-conscious about my eyes.’ Another thing Williams doesn’t talk about is his mixed ethnicity, leaving the internet to speculate that he may be of Asian as well as African American heritage. 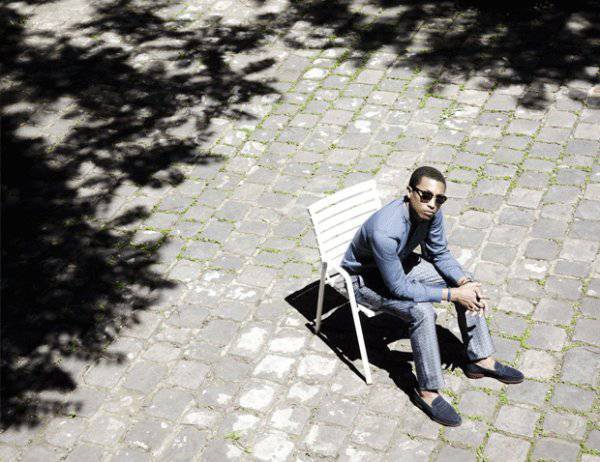 What he really loves to talk about is science and the intricate workings of the brain. He watches the Discovery Channel obsessively and has even become friendly with a professor of neuroscience and psychology at the University of California in San Diego, Dr VS Ramachandran, whose son was a N*E*R*D fan. In 2008, the band released an album called Seeing Sounds, a reference to synesthesia. Since he was a child Williams has seen music in terms of colours; Dr Ramachandran has confirmed in the past that ‘Pharrell’s brain is probably seeing coloured landscapes when he [hears music]’.

I ask what colour N*E*R*D’s music is? Red hot? He laughs. ‘Depends on the song, man. But I see them all as different colours. Same way you see a red truck.’ We are interrupted by the arrival of a McDonald’s meal and a growl from Williams. ‘The French don’t believe in ice; in the States cold drinks are predicated on ice.’ I’m just about to ask another question when I realise that his head is bowed. He is saying a silent grace. And then he yells: ‘Mike! Can I have napkins, man? Sorry!’ He looks at me with mock suspicion. ‘Please don’t make me sound like a rock star.’ Are you a rock star? ‘No, I’m a diva.’ 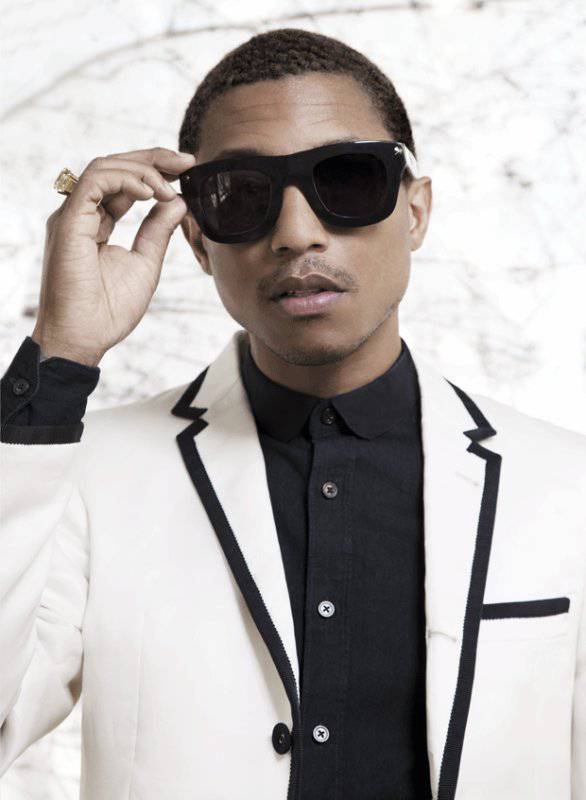 Williams does display some diva tendencies. But then, out of the blue, he can flip to flirting and being generally playful. Perhaps when you’re worth so many millions you get to dictate the atmosphere. Was he even cockier as a younger man? ‘When I first got into this industry? Yes, I was. I was a little more pompous. I got tired of it in the end. I didn’t become a monster, but I wasn’t as nice as I could have been.’ He has been endlessly described as awkward, monosyllabic; is that not his memory? ‘When I was young I didn’t understand how the music industry worked. I’ve done things I shouldn’t have done. I’m a human being. I was young. I was dumb. I thought I was a genius. I’d sold a couple of records.’

His honesty is impressive. Perhaps not quite fitting in at school and realising early on that ‘honesty is more important than cool’ stopped him from being a snob. Certainly part of his appeal as an artist is his musical diversity. He grew up listening to Queen and has, in the past, talked of liking Coldplay and Keane. ‘The media want us to fit in a box. To only like one genre. But the iPod was made for people to listen to anything and everything. Right now I’m really into singer-songwriters. Not so much “Do you wanna dance?” as “She left lipstick on my collar”. I love Frank Ocean. Adele. I recently worked with Conor Maynard, a kid from Brighton who’s super-talented.’

As he finishes his food, I ask what he thinks his legacy might be and he grins. ‘Loving life. Loving to inspire others. Hey, man, I don’t want to be thinking about my legacy, there’s still so much to learn. Learning is the most essential part to life as I know it. I’m an enthusiast. It’s what keeps me going. Because, left to my own devices, I’m naturally very lazy…’

He doesn’t have time to be idle these days, what with the fashion lines and his work as a producer. ‘I love my work!’ He wipes a bead of sweat off his brow. ‘I work hard, you know? I’m often in the studio for 12 to 15 hours a day. More than half the year I don’t take Sundays off…’ So what does he do when he’s not working? He shrugs. ‘I see my family. I’m close to them.’

Pharrell Williams is a complicated character, apparently torn between playing the hip-hop superstar role and being a bright, engaged, good bloke. I ask if he ever takes a proper break. ‘Holiday for me is my bed, my girl, peanut butter and jelly sandwiches and watching cartoons at 3am.’ His girl? Hoping his guard might be down, I quickly ask who she is. He shakes his head firmly, offers an enigmatic smile and changes the subject. ‘But I don’t like to sit still in the same place for too long; I’m too nomadic. I suppose I’m an artistic maverick. That, I think, would be a good legacy.’