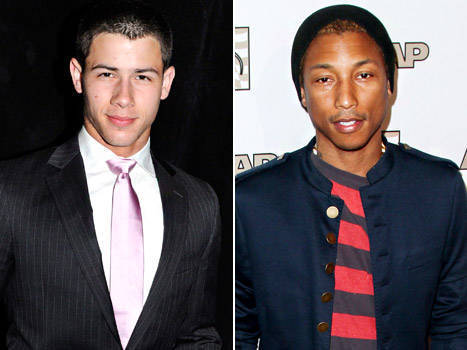 Jennifer Lopez is out and Mariah Carey is in — but who will take over for American Idol judges Steven Tyler and Randy Jackson? “Who I Am” singer Nick Jonas, 19, and N*E*R*D singer Pharrell Williams, 39, are the frontrunners to fill the two vacant seats at the judges’ table, multiple insiders tell Us Weekly. (Jackson, 56, is being moved into a “mentoring role,” according to a source.) “Nick is pretty close to signing to be the Idol judge,” one insider says. “They flew him in to L.A. last week for final meetings.” Jonas recently ended a four-month engagement in Broadway’s How to Succeed in Business Without Really Trying, and according to a source, “[American Idol producers] think he can help bring that younger demo to the show.”

Williams — who has produced hit records for Britney Spears, Justin Timberlake and Gwen Stefani — is currently negotiating the terms of his contract. “Everything is looking good, but they’re still working out details,” an insider tells Us. A rep for FOX had no comment. Previous American Idol judges include Simon Cowell, 52, Paula Abdul, 50, Kara DioGuardi, 41, and Ellen DeGeneres, 54. Host Ryan Seacrest, 37, is slated to return for Season 12, premiering this winter. Thanks to menamearenick.