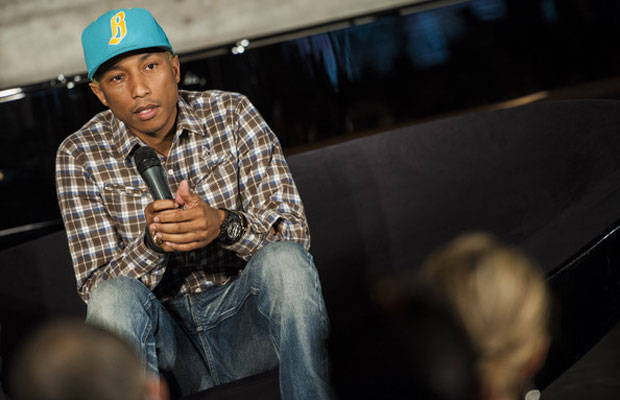 Pharrell Talks Art, Design, And The Importance Of Learning.
Don’t try to get inside of Pharrell Williams’ mind, it’s too much of a daunting task. Throughout his career Williams has managed to encompass everything that’s cool about music, fashion, and art. His work, which includes everything from jewelry with Louis Vuitton and down vests with Moncler, to off-the-cuff collaborations with Kiehl’s (a bionic tote bag) and a literal four-legged “Perspective” chair with Domeau & Pérès is documented in a new book called PHARRELL: PLACES AND SPACES I’VE BEEN due out October 16th from Rizzoli.

Besides the stories behind his collaborative projects, the book features voices like Jay-Z, Anna Wintour, Takashi Murakami and astronaut Buzz Aldrin. People that matter. People that reflect Williams‘ goal of learning from those at the top of their game. If his track record proves anything, the book will stand out amongst your other coffee table decorations. Last week we caught up with Williams’ in attempt to get some answers to the method behind his creative madness and what keeps his young. Read on for P’s thoughts… Interview by Joe La Puma (@JLaPuma).

Complex:How did you decide what was going to make the new book, ? Obviously you’ve had all of these experiences and these products and interviews, how did you whittle it down into what would make the final cut?
Pharrell: In terms of the process, there was so much stuff that we quite honestly couldn’t fit into it, there’s so much stuff so we decided to just pair it down to the simplest things we could at first. It’s kind of confusing because there’s such a big amount of work that we were trying to just find a definitive direction because there were so many interesting paths that we could have taken. You know me, I’ve overly ambitious so I think we just chose the most important things that we thought were interesting and important.

C: Throughout the years you’ve always experimented with your look and taken risks most people would, quite frankly, be too shook to even try. Do you think your ability to step out of the box is something you were born with or developed over time?
P: You know what, it’s honestly just instinct and identity. I just kind of do what I feel like resonates with me personally and makes me feel comfortable. You just gotta do it shamelessly like, not everybody is going to get it but you know, you know how many people everyday just sort of they dress based on their personalities and they get haircuts based on what they feel like suits their faces. Those things just naturally just fit into place, don’t they? You look up and you see what makes sense for you. You asked me if the person is necessarily born with it, I don’t know, it could be or whatever. But I think more than anything else it’s identity and I do things that I feel like suit me and that’s not going to fit for everyone. Like I said, just look at the average person on the street and there’s something that’s funny about them and there’s something that’s super interesting about them and it sort of depends on who is looking at the person. I think that the greatest thing about us, as a species, is our identity and individuality, it’s everything.

C: I feel like most people maybe don’t have that instinct kind of on the level that you would have. If that makes sense.
P: Yeah, the only thing I have to lose is respect for myself. If I’m making a concession or compromise in what I want to say and how I feel and what I want to do, for what and who? Like, at I Am Other [Pharrell’s new multimedia creative venture] we say, what rules? That’s because it’s two-fold. What rules your life, what rules your life and then ask yourself the same question again to ask yourself what rules should you cater to.

C: Looking through the book, what would you say allows you to express yourself more-design, fashion, or music?
P: I think all of the above, especially since what we do requires all three anyway. All of the above. What’s music without fashion, you know? What is fashion without music? They’re all basically ways to express yourself, musically you express yourself and fashion-wise you express yourself. Some people who are good at one thing and some people are great at all three and there are people who are terrible at all three but I feel like there’s room for everyone. I don’t know, man, I’m very thankful for the nice accolade. Sometimes when people don’t get it, I respect that too. I’m thankful to be able to express myself and I’m just having a great time.

C: What’s been the most challenging thing for you to work on from a design standpoint? You’ve done chairs, jewelry, sunglasses. Was there anything that was harder than one another?
P: You know what, I think each process was kind of tough, it’s a challenge, because I’m always trying to do something that had not been done before and if it has, it’s been 20 or 30 years and I’d like to give another interesting take on it or whatever. I don’t know.

C: If there’s not one… it’s always tough, like you said.
P: You know what it is? The challenge is wanting to do something more and different but at the same time, it’s not a bad challenge, it’s a fun challenge because nine times out of 10, it’s a collaboration with someone who is really at the top of their game. I’m basically learning about collaborating and the hardest part isn’t really that hard when you look at it from that perspective. I’m collaborating with genius people so I’m the fortunate one in it. The challenge isn’t really a challenge, it’s kind of the fun problem.

C: You have a significant collection of art — Kaws, [Takashi] Murakami, [Keith] Haring — how do you get into collecting and what attracts you to those artists?
P: In terms of collecting, that came from Nigo [Founder of Bathing Ape], Nigo taught me a lot about art with his collection and the artists that he was into and why he was into them. I developed my own taste and the things that interested me and a lot of it was definitely influenced by Nigo and his perspective. At the same time, eventually I grew my own taste buds for the things that I thought knew me as a person. For the most part, I kind of enjoy everyone else’s stuff more than my own because it’s just interesting to see new and different foreign concepts from different perspectives.

C: One idea you came up with is ‘Kidult’ and it’s a term that marries an adult with a kid. People always say that you don’t age whether it’s the way you dress or through your music or just being savvy on products. How do you stay young? Is it a mindset? If you could put into words, what is the biggest way you stay young?
P: I would say that everything starts with the mind. Everything that we know and love and understand starts right there with the mind. It’s all in your mind.

C: Going back to collaborations, these play a large role in your visibility whether it was Moncler or working on furniture with Emmanuel Perrotin Gallery in Paris. Would you say there is a consistent theme for your creative practice?
P: Yeah, I’m consistently kind of exploring the things that I’m curious about in life and things I want to learn about. I turn them into projects versus just a mere education, I like to turn it into a 3-D education.

C: You once said fashion is more about the feel than the science, do you still feel that way? I remember I always used to read interviews and you used to say, ‘I wear what I’m comfortable in.’ It’s hard to fathom because some of the things are just things people wouldn’t think about wearing. Is that still how you feel day to day?
P: Yeah, for sure. I always say, there’s three things: it’s how you feel when you get up in the morning, where you’re going, and what the climate is going to be like.

C: You’ve also always prided yourself on making your things own and doing things that haven’t been done before. Customizing your Timberlands and customizing jewelry pieces, is it more of a love of exclusivity or a love of having a hand in the design process?
P:I think all of those things are nice things but more than anything else, it’s just self-expression. There’s nothing wrong with, if you’re not customizing something for yourself, it’s okay if you’re buying something from the store and some designer did it and 200 other people have it. It’s okay, it’s about expression, right? It’s no different than any other thing that we say, afraid that we think is interesting and we borrow. Or something becomes a trending trade, what’s the difference? It’s still self expression, it’s someone else’s self expression that resonates with you that you chose to use, too. I think it’s all about self-expression at the end of the day and it’s all about individuality and again, that’s why everything that we have been doing with I Am Other is really honestly all about that.

C: High fashion and hip-hop are merging even more closely right now, how do you feel about the progression and will it push you to investigate new lanes or what?
P: I’m comfortable with the things that my current set of endeavors…there’s so much to learn. More than anything else, I know, I started this conversation off, I was kind of confused because that question sort of had me stumped but it’s very clear to me that all of the various projects are more like lessons. I’m just kind of documenting my education.

C: I wanted to talk about tattoos. There were reports a while back about tattoo removal, I know there was a time when you were really into and you got tattooed by a Anil Gupta. Back then, were you looking at tattooing the same way basically you’re like collecting art?
P: No, I was just young and dumb. I ended up getting them as fast as I could, just going through a really crazy rebellious period. I got a lot of them but yes, he had given me one of my best tattoos. I’m going to go back to him. I still have tattoo removal being done now.

C: How do you learn? Many of us look at the Internet and we learn. For you, is it more about getting these face-to-face meetings with the people that you’re partnering with? The steps of learning must be fascinating for you. How do keep up?
P: Yeah there’s a lot of Internet but also it’s the hands on collaborating with people too. You get the CliffsNotes educational cram session and you learn things and you learn processes and you apply that which you’ve learned to the initial instinct that you had or the cool idea that got you the meeting. You’ll get with someone who is really good at what they do, I feel like we sort of covered this already but that’s sort of my process, it’s all educational to me.