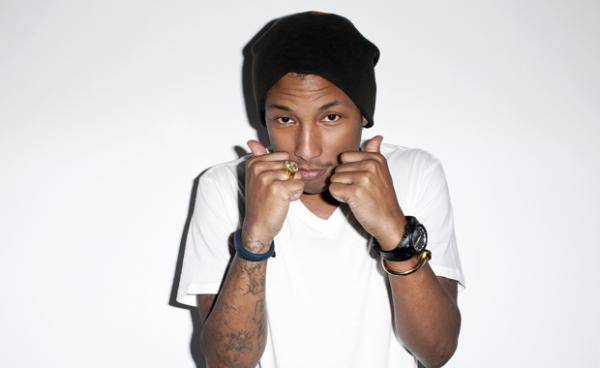 By Adelle Platon. Pharrell is making a special delivery. In a new collaboration with Los Angeles-base subscription service Quarterly Co., Skateboard P has been recruited alongside several tastemakers to ship a package filled with hand-picked goodies to their enthusiasts. Here, he keeps a tight lip on the contents but offers up his inquisitive thoughts on space travel, being named a VIBE genius and a gift he received from Daft Punk.

VIBE: So what can subscribers expect inside of a Pharrell package?
Well, I can’t tell you exactly what’s in there, but I think that more so than anything else I just love and appreciate the opportunity to give my supporters a package quarterly, pun intended, so that they can get to know [me] better and they get what we want them to have as well.

If a package was curated for you with items from the past, present and future with no price tag, what five items would you want?
Well if I told you that then I’d be telling you what I put in there. (laughs) The whole thing is to leave it open for them. When they get it, they’re excited and know that we really care about them and that’s me and my team because it’s not just me. I love my fans. I never want to cheat them, use them or barter them when it comes to other brands coming to me for endorsements. I don’t walk in leveraging my demographic although that’s what they’ll think. I just purposely don’t do that. If I like a product, then I’ll endorse a product but I’ll never drag my supporters that made me and have been feeding me and my family for years. Quarterly is what that’s for.

Now your theme is curiosity and I feel like you’re a culture hoarder who knows a lot about everything so what piques your curiosity these days?
PW: Hmm once again (laughs) if I tell you that I’ll be telling people what’s in my package. For the most part, I love keeping up with the news but then I also love the Discovery Channel but then at the same time I also love reaching into oblivion and pulling out new songs, new prints, new shirts, new shoes, and new ways of doing things and approaching existing problems or just trying to find solutions. I’m that guy. I’m a little curious. Am I successful at it? No, but I love it enough to say that’s what I’m into.

You know what you should put in the package though? That pill that Daft Punk gave you.
Oh, it’s not a pill. It’s an effervescent tablet and it’s the equivalent to Red Bull so it’s like drinking an Airborne. Right when you think you’re about to get sick, there’s this roll of tablets that you put in, it’s almost like Alka-Seltzer and that’s what it is. It’s just not like 5-hour [energy shots] and you don’t have a crash. It’s holistic and it’s sold in Paris. It’s Guronsan I believe.

Speaking of The Robots, you guys were in Paris working together. It can’t be a happy coincidence that Kanye West is also in those parts as well.
Maybe.

Can we expect a future collaboration?
I would for sure. I’m actually meeting with him today. I’m going to go check his record out.

Dope. Also VIBE recently honored you as one of our top 20 musical geniuses since the magazine opened in ’93. Would you consider yourself as such?
No way. I’m sure the other 19 people are super worthy and I’m sure you could’ve found a twentieth but I am awesome to be considered amongst people who make significant contributions to music. I’ve only tried and aspired to, and I don’t know if I’ve succeeded. I just know that I have an incredible support system of fans and just great publications that were open-minded to what I was just trying to do and one thing I can say is I’ve never looked back because I was afraid that I’d see the end. So if you look forward, you’re always going to discover something new. It’s like the song [“Get Lucky”] says, “We’ve come too far/ To give up who we are” and I’m just thankful more than anything else. I’m very thankful.

You also recently celebrated your 40th birthday. Is there anything that you want to do that you haven’t yet?
No not really. I’m always curious to do something and learn. Every minute that we’re not learning, we’re wasting time.

You think you’ll ever travel to the moon anytime soon?
No and the funny thing is I’m so obsessed with space. I’m one of those guys. I’m obsessed with the Amazon too but with National Geographic’s channel, the pixilation is so clear, I’m good with that.