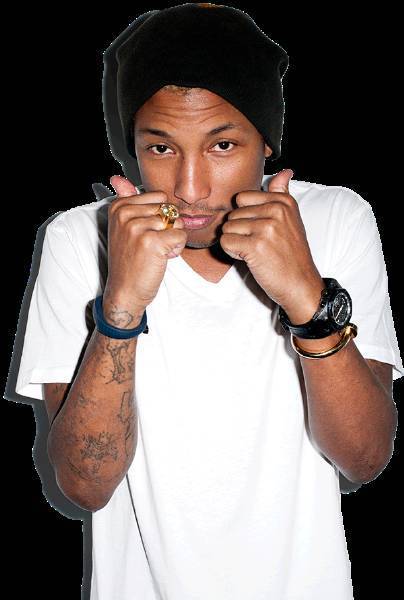 By James Montgomery. ‘I was with the robots yesterday, and they’re super thankful,’ Williams says of his ‘Get Lucky‘ collaborators. You can call Daft Punk’s “Get Lucky” many things — an unlikely Song of the Summer frontrunner, a record-setting smash, the most unlikely success of the duo’s career, etc. — but whatever you do, don’t call it disco … at least not around Pharrell Williams. “I don’t know if it’s a disco track; like, if you really think about it, it feels a little bit more, like, ‘post,'” Williams told MTV News. “But if you consider all of the elements, and where it comes from, the feeling, it kind of feels like out of time, like it’s not necessarily in a specific time. At least when I hear it.” And while Williams might not agree with most folks’ assessment of the track, he’s got no problem with the way “Get Lucky” has been received by fans around the world.

It’s reached the Top 10 in more than 28 countries (it’s #4 and rising on the Billboard Hot 100), been certified gold or platinum in five nations, and broken streaming records on sites like Spotify. In short, it’s a sensation … and neither Williams or Daft Punk can believe it. “I mean, I thought it would do good, I didn’t know it would be this; I didn’t know it would be breaking records across the board, I had no idea,” Williams said. “I just thought it would do well, because it felt great and it felt different, and you guys know I live for those types of things, to do things that are different. So the fact that it’s been so explosive, and that the people chose to make it the phenomenon it is; the only thing we can say is thank y’all. I was with the robots yesterday, and, of course, they’re super thankful too.”

And speaking of logging quality time with the robots, is there a chance Williams might be joining Daft Punk on the road for a Random Access Memories tour? To be honest, he’s not sure: turns out DP are more interested in the present … y’know, just like Williams sings in “Get Lucky.” “They don’t talk about future plans; they’re all about the present, which has no ribbon,” he laughed. “The masks are an extension of who they are as people … they pretty much think that way regardless.”