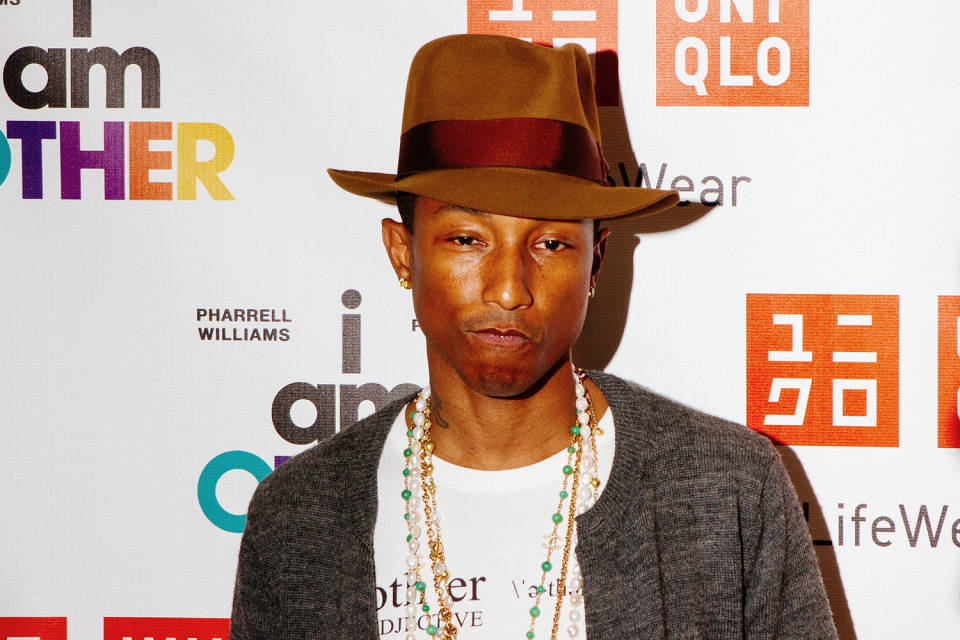 Pharrell Discusses Being Different, Collaborating with UNIQLO and His Vivienne Westwood Hat. Pharrell graced the red carpet at UNIQLO‘s New York flagship earlier this week to celebrate his i am OTHER collection launch with NIGO. We caught a few moments with the singer-songwriter-designer who opened up about his music, what i am OTHER means to him, and why he wears Vivienne Westwood.

On i am OTHER:
“What it allows me to do is to get important messaging that I feel like is pertinent at the moment, like ‘The Same Is Lame.’ We actually live in a world where a lot of people pick archetypes: By the time you’re 20 you’re like, ‘I’m a painter, and this is what I do every day,’ or ‘I’m a writer, and this is what I do,’ or ‘I’m a culinary artist.’ The last time I checked, when you’re a painter, you also eat food, you also watch television, you also read books. You don’t just need to be in a box. ‘The Same Is Lame.’ What makes you different is what makes you special. Like snowflakes and human beings: both super cool, but not the same.” “The i am OTHER message that is most dear to me is Individuality. Because who wants to look like something else? Who wants to be camouflaged in with everyone else? What makes you look special? If you look and sound like everyone else, how would we know who you are?”

On UNIQLO:
“UNIQLO seemed like the best fit for me to be able to help tear down some of these walls of categorizing. This was like a really good, giant clothing canvas to allow me to communicate i am OTHER.” “If you do this with any other brand, the quality control falls apart. You get one wear, it’s over. It’s gonna turn into a sports bra after you wash it because the quality is just terrible. NIGO really took his time and really vetted the proper fabrics so there was just a high quality control there that I really trusted. So with UNIQLO you get inexpensive ubiquity and you get quality control and you get the ability to put out good messaging to the world. There’s nothing better.” “I want my collaborators to be the best at what they do. I usually try to collaborate with masters because they are willing to try something different. And I know in the process, because they are masters, I will learn something.” “I’m a huge fan of NIGO-san and he’s a good friend of mine. I admire everything that he does on a high level. Master NIGO-san, what else can I say.”

On his style and Vivienne Westwood hat:
“I’ve had it for six years. At the time, I bought two of them, a brown one and a straw one. I gave an interview on MTV and I was wearing the hat the whole time and nobody paid attention to it. It was New Year’s, so everyone was probably shit-faced and no one cared that I had it on then. I don’t know why it did what it did, but at the end of the day the accolades belong to Disney and Westwood who made it 30 years ago. If anything, their hat stood the test of time and I was just wearing the hat.” “I’m not a style icon. There are blogs like The Sartorialist where you see people greatly dressed all the time, all day long, and I’m never in there. What I love about The Sartorialist is that they are always picking up people with their own sense of style doing what they want to do, and that’s all I’m trying to do. That’s what it’s about. Being comfortable, doing it not because you’re looking for attention but because there is something inside, like: A, how I am feeling this morning; B, where the hell my head is at; and C, what’s the climate gonna be like. And that’s it.”

On his music:
“You know the sublime, super sexy stuff part of me. But then there’s another part of me that just has these super deep values of what really represents me, this planet, and humanity as we know it. That’s what I wanted to express with my album.” “I wrote Marilyn Monroe because there was such an emphasis placed on the shell of who she was and I was sure there was so much more to her than the statue of her that she could never outlive.” “I don’t design off sounds, I don’t design off music. What my musical and design processes do have in common is I’m always trying to make something no one has done before.” “The people took it upon themselves when they uploaded their “Happy“ videos. There was a movement created behind them, a movement that superseded the song, anything I could have written, and it superseded me as an artist. At this point, it is no longer mine. The song does something to them, not me. When I write the song, I’m on this side of the song, but on the other side of the song is all that movement, the people downloading, uploading, purchasing, talking about it. I’m not responsible for the views on YouTube, I can’t do any of that. It’s humbling because it didn’t have to be my song. I am ever so grateful and I thank the people because they did that, not me.”