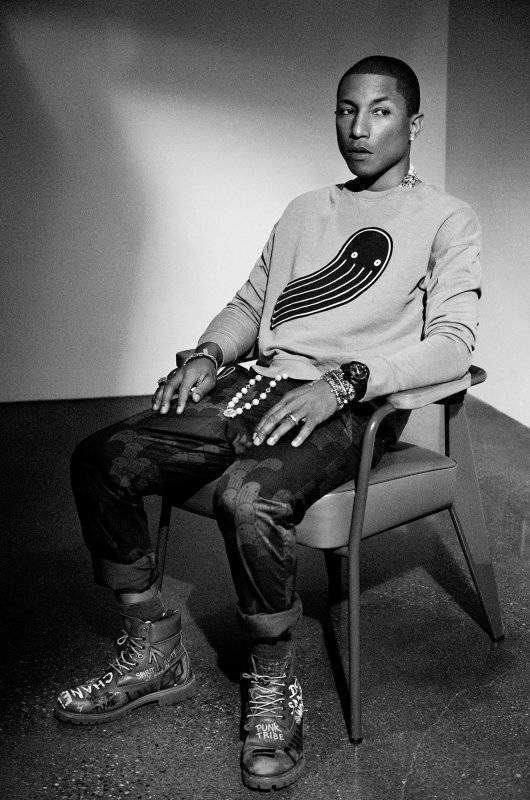 Pharrell Williams says he has a special connection to the sea and has revealed it inspires a lot of his work. The ‘Happy‘ hitmaker is obsessed with the oceans and says the ”best feeling in the world” for him is to be frolicking in the sea in Miami, where he lives. Pharrell believes he has a special connection with water because most of his music and his fashion designs are inspired by the sea.

The musician reveals his passion for the ocean in his first penned magazine article for PORTER Magazine as part of their Life Aquatic portfolio to mark World Oceans Day, which took place on June 8. In his piece, he reveals: ”Of all the elements, the one I identify most with is water. I grew up in Virginia Beach. I live in Miami. I love boats and I adore being out in the ocean – it’s the best feeling in the world. Sometimes I feel like I live on water.

*tv3.ie
*fuckyespharrell.tumblr.com
Most of my ideas come to me in the shower and the sea always inspires my work. So you can see why water is a huge inspiration to me. It’s important for us to act because the ocean is what we all live off – it’s our everything and we cannot afford to hurt it.” Pharrell felt compelled to write the piece to urge people to do everything they can to save the sea’s endangered species and stop polluting the Earth’s oceans.

The 42-year-old star insists if the world doesn’t act now then we can kiss goodbye to life on the planet as we know it. In his article, he adds: ”I really hope that by achieving awareness everyone will do their part, that they will pay attention. Listen, I am not perfect, but every little thing we do really, really helps. What’s the worst case scenario if we don’t protect our oceans? The answer is simple – no life.” As well as Pharrell, Alexandra Cousteau, Dr. Sylvia Earle and Kirsty Bertarelli have all written for the global fashion magazine’s Life Aquatic feature. The latest issue of PORTER goes on sale on June 5.