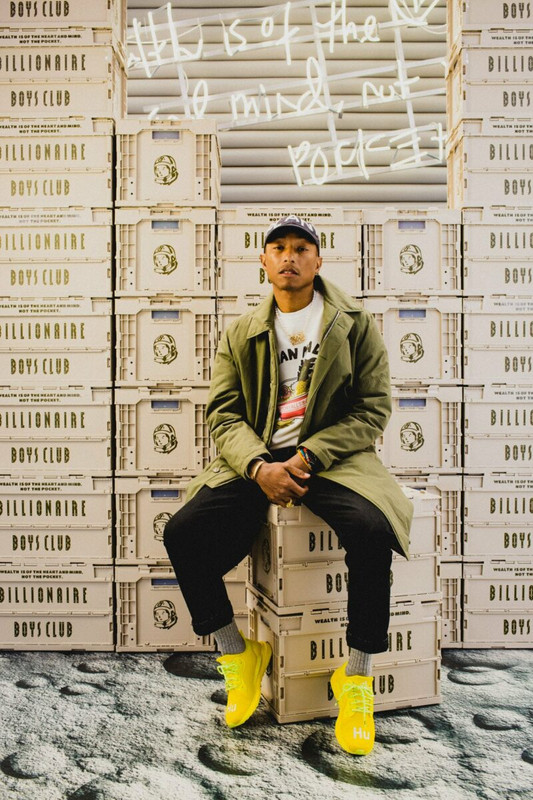 In the summer of 2003, Ben and Bobby Hundreds launched The Hundreds at the same time Pharrell Williams and NIGO were introducing Billionaire Boys Club to the world. For the first time in 17 years, both streetwear brands are collaborating on a T-shirt to raise money for Black Lives Matter and the Black Mental Health Alliance. Today, Bobby and Pharrell shared the following conversation around being a Black brand owner in the industry, mental health, and the importance of “sharing the codes.”

BOBBY HUNDREDS: As we all know, there is a lack of Black owned streetwear brands in proportion to the amount of influence black culture has on streetwear’s design and perspective. But back in the early 2000s, there was even less Black leadership and ownership in the street fashion space. When you launched Billionaire Boys Club, was this on your mind? What was it like for you starting up your label as a young Black man in an industry that was predominantly owned and profited off of by white people?
PHARRELL WILLIAMS: When I launched BBC [ICECREAM], I was a different person. My concerns were different, my thought process was different, my self awareness was premature. I considered myself a black man and making chess moves was enough at the time because that’s what the people I looked up to were doing. I was proud that they were black and I thought it was enough. Since then, I’ve educated myself and realized that would never be enough when the playing field was never leveled. It’s never been a leveled playing field since the beginning of time. It took traveling around the world and seeing what people go through to open my eyes and humble me and recognize how blessed I am. Aside from achieving, my biggest responsibility is to hold open the door and show the way for my own people… and to explain to those who have the power over these doors why they need to open their doors or not have them at all. With BBC, I always say ‘Wealth is of the heart and mind, not the pocket.’, but that wasn’t enough.

“Wealth is of the heart and mind, not the pocket.” This is the Billionaire Boys Club mantra. I’ve addressed this before in prior projects, but streetwear culture has been slower to adopt the mental health movement. Why is that? And how can we be better?
We just have to open our eyes, open our ears, open our minds and hearts. We don’t think like that because a lot of us are just like “I’m good” and that’s all that matters. The system trains us to be like “Don’t worry about them, worry about me. Did I make it? Ok good, ‘cause it’s hard out here.” We have to take it upon ourselves to look each other in the eyes and realize that we’re stronger together—there’s power in numbers. And now more than ever, we can’t afford to not galvanize, not mobilize…as Killer Mike says. We need to figure our way forward and upwards. If you have a brand—especially if you are of African diaspora— it’s your job to educate. And how about this, even if you’re not Black, but you trade on the likeness of us—it’s your responsibility as well. You gotta tithe…you gotta give back to that which is giving you everything that you have right now.

We are donating our proceeds to a mental health organization that puts its emphasis on the Black community. Can you speak on why that is specifically important?
Of course it’s important. There are a lot of variables that affect the minds of the people whose likeness gets traded on and marketed towards and then don’t receive benefits from it at the end of the day. And not everyone can get access to mental health resources like therapy or rehab, not everyone has people around to help. If you never really dealt with the erosion of your mental state, then it only continues to erode. There’s so much to unpack when it comes to this but, the fact that the fashion industry is thinking about the importance of mental health and how it affects the African diaspora is a very important step that we all need to take.

After George Floyd’s murder, America’s response was that of anger, frustration, and protest. Now that we are settling into a groove of consistent activism, there is discussion on what our hard goals are. There are many different answers to this, but I’m wondering what goals you’d like to see out of this? Whether it’s a short-term goal, or one that will take the rest of our lives to accomplish?
There’s no doubt that this is the American Revolution 2.0. It’s also an evolution because there are people that are opening their eyes—they didn’t realize they were sleeping the entire time and being complicit to the things that affect us and continue to lead to the untimely death of people that look like George Floyd and us. We’re also dealing with a very different Washington [D.C]… they are just overt with it [racism], there’s no hiding it. What I’d like to see is for there to be some accountability online so that at least we can get our facts straight. We can’t get our facts straight when our system is being infiltrated by foreign agents and bots. I mean, as a sneakerhead, the first thing you try to do when copping is getting around the bots. We have to do the same thing here. There is a world of divisiveness on our internet. The best way to divide people is to use the tool of selfishness. I would like all of us to be aware of all the variables at hand—there’s a lot going on. While it is dark now, I know there is a God and He is the greatest. But we gotta get ourselves up out of this. Faith without work is dead, so we have a lot of work to do…and most of it is just being more self aware. If you’re kind and think of others, then you’re heading the right way. But they get you with the lure of being selfish. Being woke is cool but man, but it’s like driving home at 4am and you don’t really know that you’re tired until you swerve. And at that point, you realize you ain’t woke. That’s when you say “I’m up now..I am going to continue to work on myself and continue to challenge the people around me to wake up.”

Whether you appreciate it or not, your influence and visibility as a Black owner of a streetwear brand inspired an entire generation of Black youth to believe they could also be the ones in charge. From Tyler [the Creator] to some of the kids in my crew today.
You know, I’m honored for things like that. But going back to the earlier question…I feel like I didn’t do enough. At that time, it was about me, I was being selfish and I thought being black was enough. So if I could encourage you all to do anything, it’s to take your people with you…don’t make it just about you. That’s why you see me with my hands together [prayer pose]. Some of us pat ourselves on the back, others of us beat ourselves on the chest. That’s cool, I’m gonna let you do that…but when you’re done, bring people with you. Share the codes…share the cheat codes. A lot of us had to figure it out ourselves…that’s where we go wrong. The more of us that learn the codes, the stronger we are. That’s how we get to market share. If we don’t have market share, we don’t have a voice. If you don’t have a voice then you’re going to need help with healthcare, education and the biases that are ingrained in our legislation that makes the gravity 2x heavier on us. Share the codes, hold the door open.

Did you have a figure that you admired when you were growing up? And what would you say to a young Black man or woman today who is thinking of entering the space?
The people I tend to admire don’t make sense when I get asked this question because what I admire in people doesn’t really resonate with most people. I’m into people who are more like sages and seers. My grandparents, my mom and dad…wise people who see things. You know, the type of people who can read you from head to toe when you walk in a room..those are the people who I spend most of my time talking to. I find value in the things unseen. That doesn’t work for everybody because it’s not a tangible thing. I don’t give names of people who you can see the things they have tangibly done. What I would say to any young black man or woman today who’s thinking of entering the space, is to surround yourself with people that are better than you. Do it because you love it so much that you would do it for free and you can’t believe that you can actually get paid for it. Hold the door open. Talk to your partners about them understanding more, listening more, watching more, and being more open. Share the codes…share the codes…share the codes. And, you know what, get really excited when you see others doing well. Some people take Ambien, some people take melatonin. But, I can honestly tell you the best sleeping aid known to mankind is good will. Be excited when your brother wins. Be excited when your sister wins. Don’t block their blessing because when you do that, you’re blocking yours. Whatever God got for you is yours. That’s it…share the codes. Be happy when you see someone making it because you’re going to want them to smile when you’re doing the same.